In essence these are five frames of bees in a ten frame hive.  The five frames are nuc-like because they are full of bees, well-built out, stores of honey, lots of brood.  The other five frames are undrawn foundation.  I think both of these hives will be like taking a nuc through the winter.  I think even with our feeding them 5 gallons of syrup, they'll still just fill the deep box, if that, before winter comes.

In one of the hives - the back one - the five frames were put in the center of the box with the empty frames on either side. 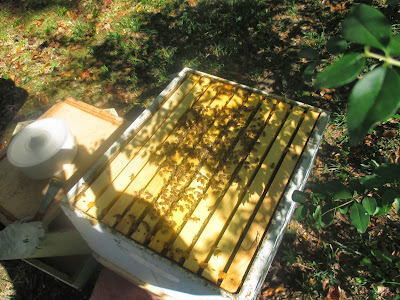 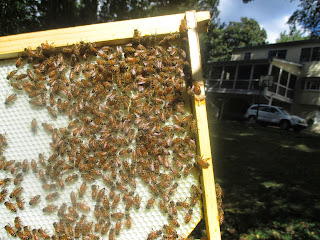 In the front hive the five frames of bees were put in on the side of the box with the empty frames on the other side: 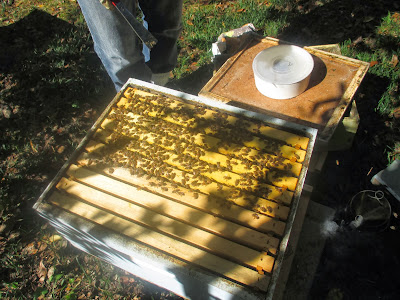 The bees in this box may do fine the way they are and may do better if we move them more to the center and put the empty frames on either side.

Both hives are putting up our syrup and it looks like they already were storing some honey. 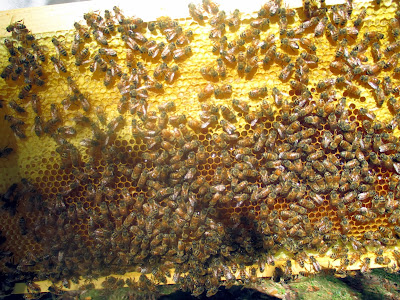 Jeff is really excited about these bees for several reasons - they are about a long block from his office so they feel personal to him.  He has been their main caretaker so far, and he REALLY wants these hives to succeed after our year of ongoing bee loss....(I've been scared to list all the losses because I don't want to see them all lined up.)

Today we saw the queen in both hives.

Here's the first one: 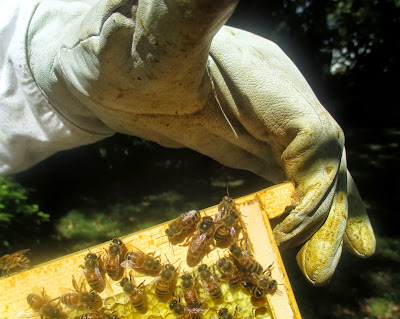 And here's the second one: 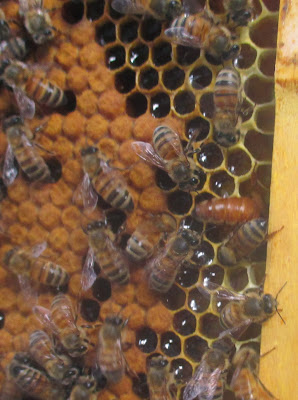 Both were on the side edge of the frame so Jeff was very careful returning the frame to the box because we know if we kill the queen, this hive is done for.  There are no more drones and no way to make a new queen until spring.

Both rapid feeders were completely empty.  We had to pour v.e.r.y. s.l.o.w.l.y because the bees were so eager and we had to give them time to move out of the cone. 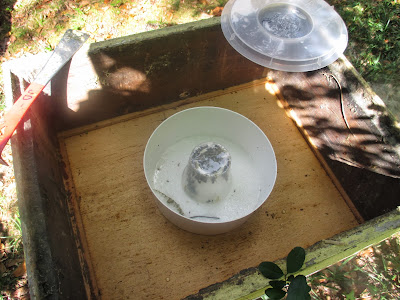 Although we brought a new box with drawn frames in it, it looks so unlikely that these bees will need another box before the cold weather sets in.  I'm going to email Bill Owens and ask him about advice for over-wintering in just one deep box.