I'm in Philadelphia for a conference for my other (real) job as a psychologist.  Walking down S Front Street to get lunch yesterday, right in front of me on the sidewalk, I nearly ran into this historical marker: 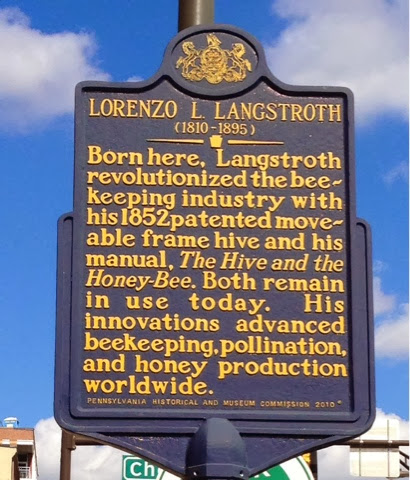 Amazing!  According to Wikipedia, he was punished as a child for wearing his pants out, kneeling on the ground to study ants.  Since I'm in Philly with my psychology hat on instead of my bee veil, it is also fitting to note that Langstroth took up beekeeping to deal with his bouts of depression.
He recognized bee space and designed the Langstroth hive with respect for bee space. He was never able to patent his design and made no money from his efforts.
He also wrote the hive and the honey bee, now in its umpteenth edition.
There's no birth place to tour although I would if I could.  The space is now a high rise apartment. So I visited independence hall and the liberty bell instead.

Email ThisBlogThis!Share to TwitterShare to FacebookShare to Pinterest
at 1:09 PM