Jeff went home to his family and I drove home with the split nuc and the swarm nuc in the back of my car.  Bees were everywhere.  I got most of them out of the car,  but when I locked it for the night there were still a few clusters of bees in the car!

I set the split nuc on its on set of cinder blocks, put a little leaf and grass pieces on the landing and left it.  The queen cell looked pretty newly capped (it was light biscuit as per Billy Davis), so it probably has almost its full time left - since the queen has a way to go in her development, it will be a month before the new queen is laying and three more weeks before any new brood emerges to add to the population, so it will be mid May before this will be an active hive, if then.  So the split is a hive to increase hive numbers but not one to expect to provide honey to harvest. 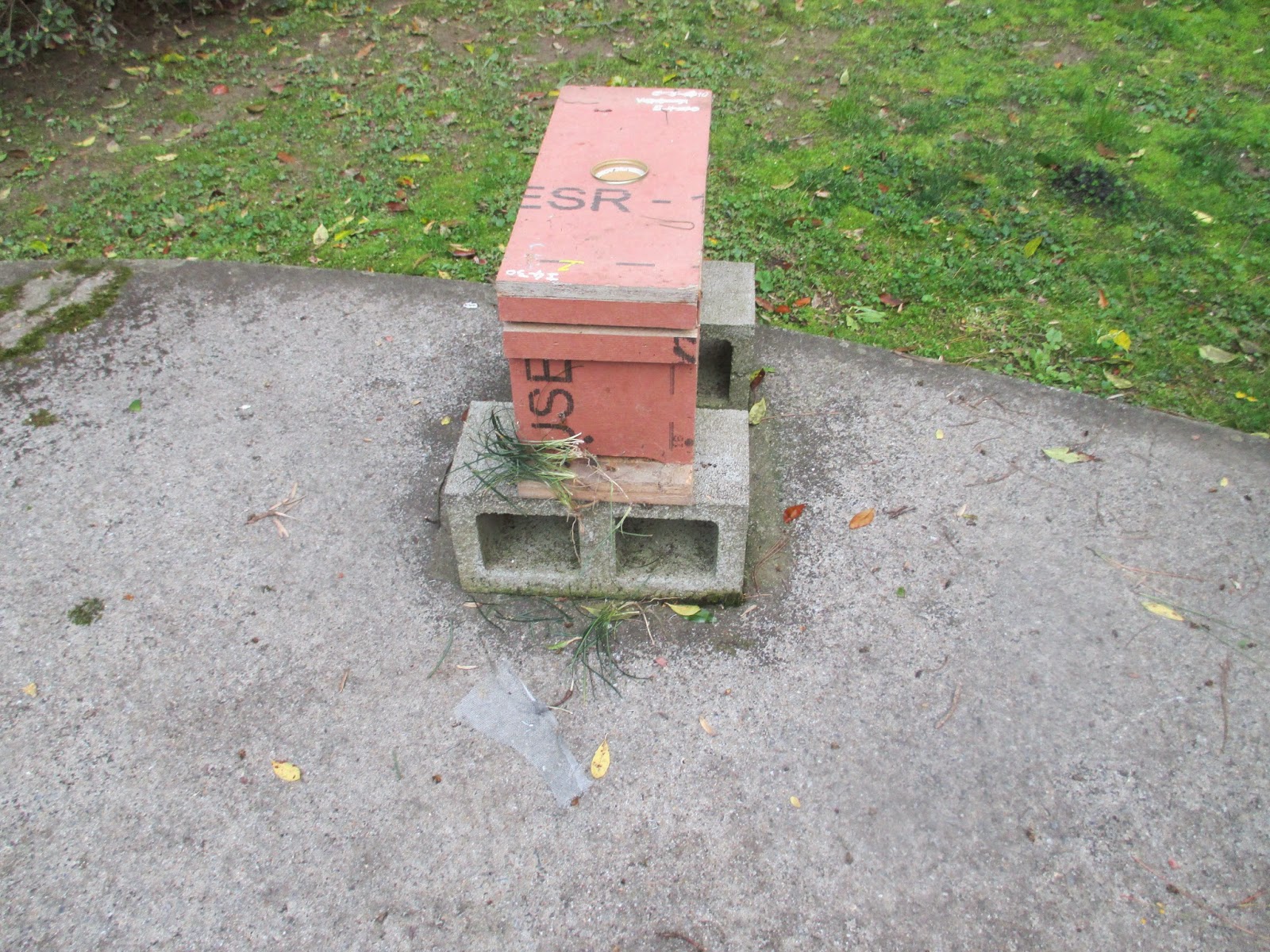 The swarm is a different matter.  The queen is mature and able to lay.  The bees with her have gorged themselves on honey to prepare for the journey and prepared to make wax.  I put this huge swarm in three 8 frame boxes (the equivalent of 2 10 frame boxes plus four).  I had some unharvested honey from another hive that I gave them (2 frames) and a few frames of drawn comb, although they should be ready to make wax right away.

I put frames in the bottom box and used the next box as a funnel. 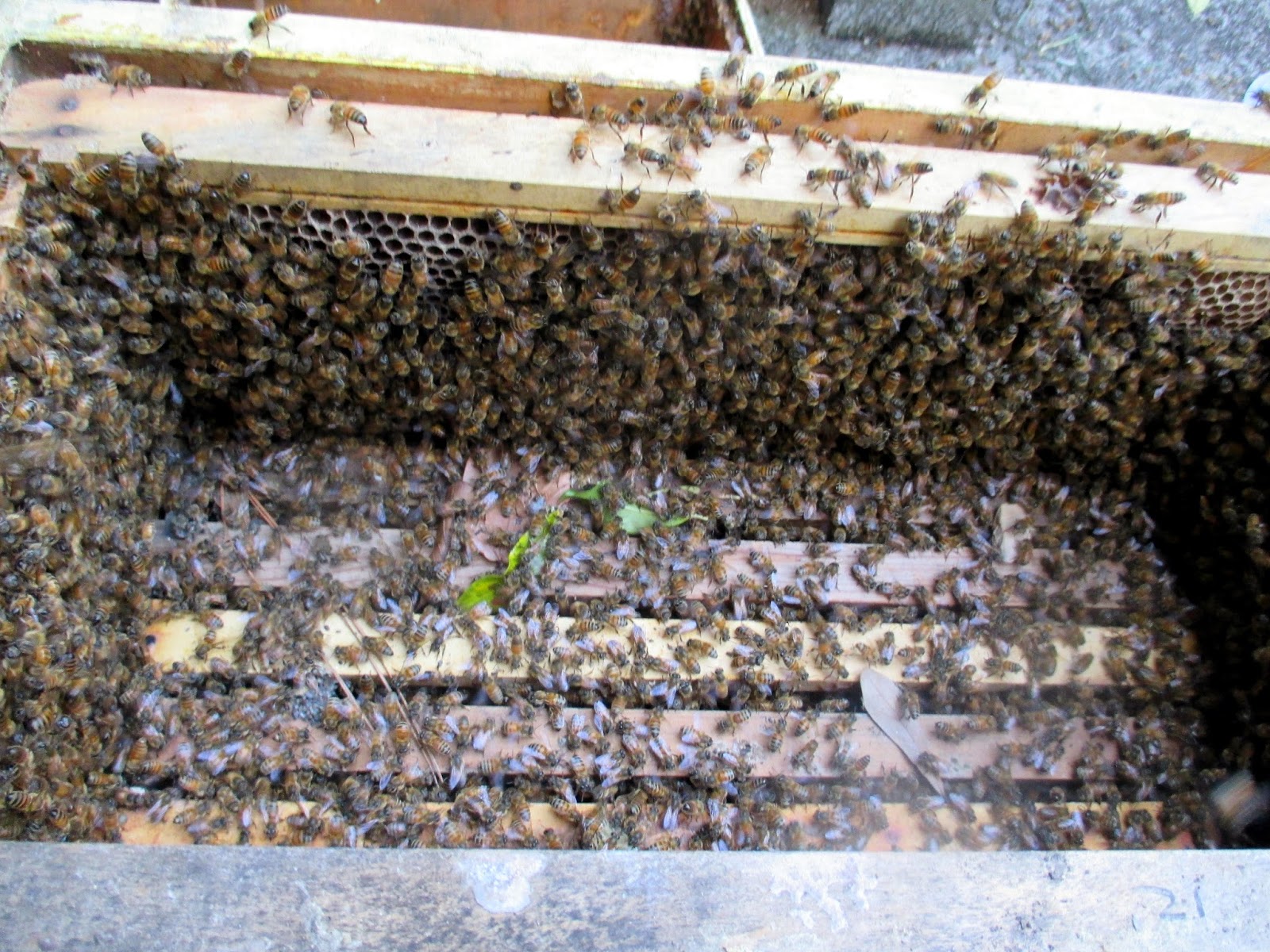 The bees on the comb are on a frame filled with honey.


Once I got most of them into the hive box, I gently added in the frames and then put on box number three and added its frames.  It was a slow process because there were so many bees.  There were still a number of bees in the nuc box and on the lid so I left both facing the new hive. 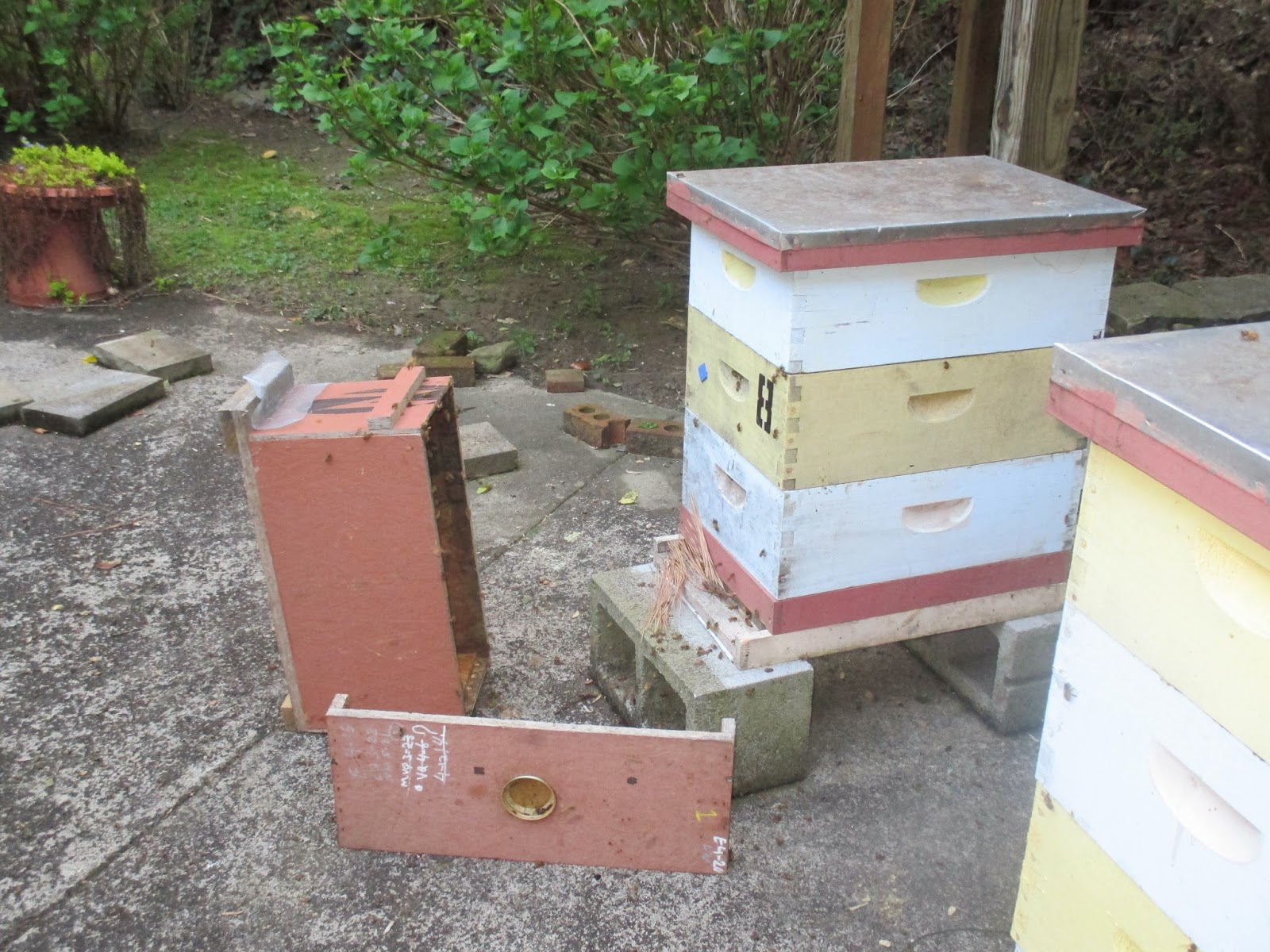 I don't have the best track record with getting swarms to stay but I employed everything I've learned from previous errors to make this work.

1.  I used old comb in each box and a frame of honey in each box
2.  I put them on a screened bottom board, but closed it up with the sticky board.
3.  I put on an entrance reducer, reduced to the smallest entrance (as per Billy Davis)
4.  I gave them plenty of space (3 8 frame boxes and a slatted rack.)
5.  I put pine needles on the landing to help them re-orient (we are miles from Tom's house - no chance of their returning home).
6.  I used last year's not-yet-painted boxes (they like the smell better than newly painted)

For a while a large group of bees were clustered right outside the entry.  But by nightfall, all were inside and the nuc box was empty. 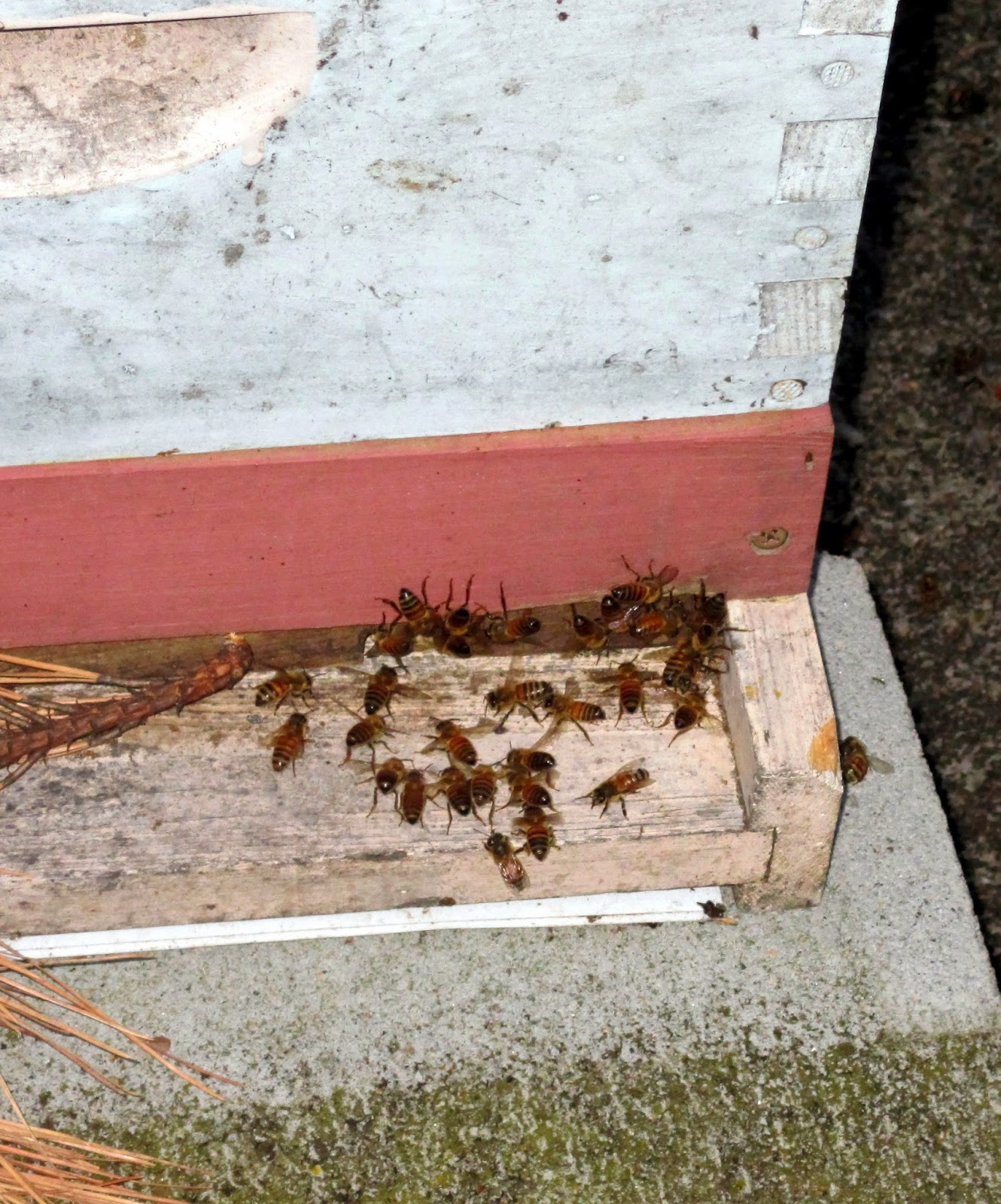 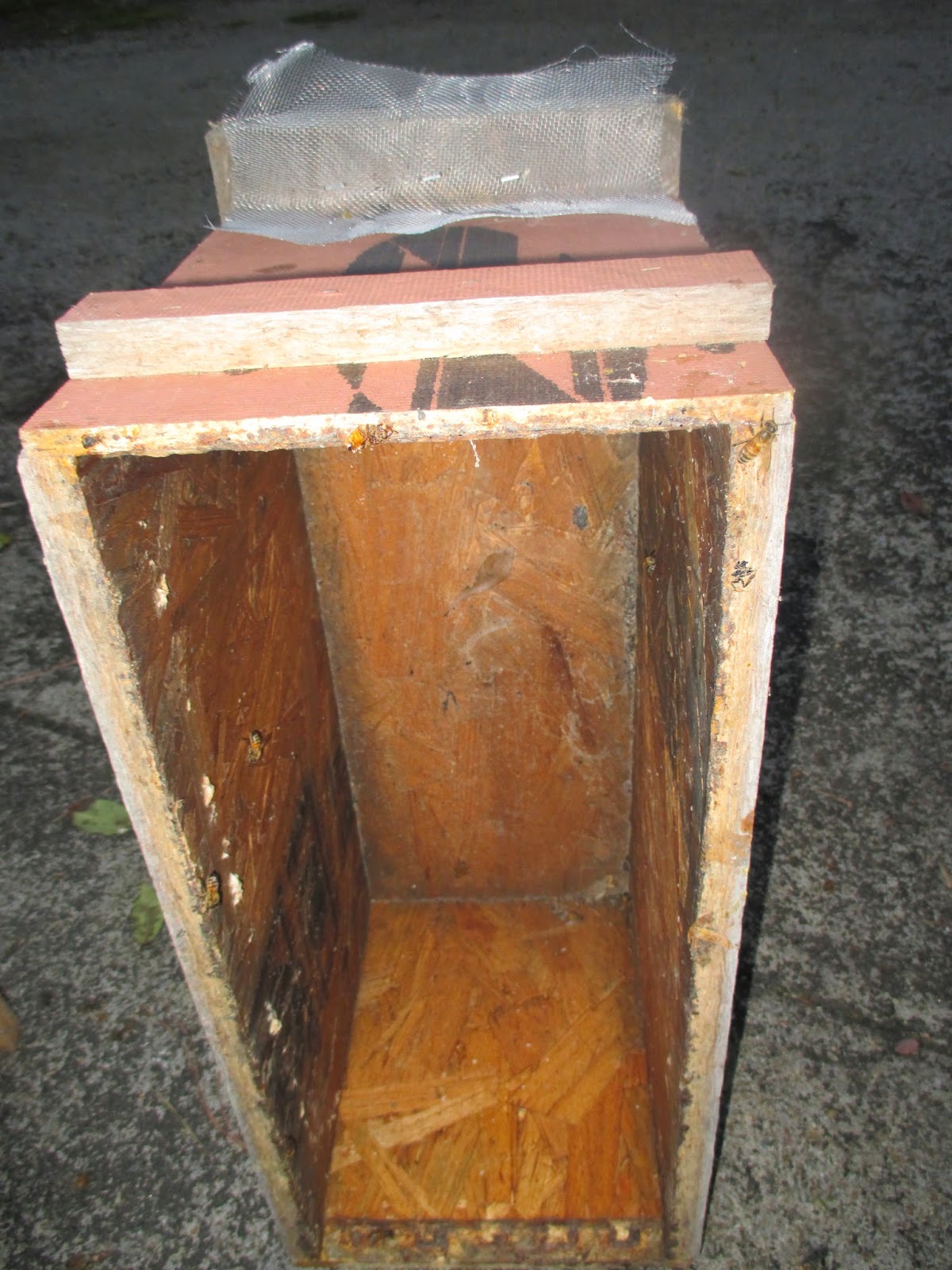 I put frames of honey in the swarm and put a frame of honey and pollen in the nuc.  I will however, make bee tea and feed it to both of these new hives - one recipe's worth until they get "on their bee feet."

I realize as I write this that I forgot to date the frames, most of which were foundationless.  I'll do it on my first inspection in about a week.

I did bring all the hive drapes into the house to wash as well as my car quilt (which protects my car from bee stuff), my swarm sheet, etc.  So my washing machine is on bee duty tonight.

Jeff and I need to install a Billy Davis robber screen on this and the hive we moved from Sebastian's.  I say Jeff and I because I really need him to operate the staple gun which I HATE doing.

Well, they are in the hive for the night, but I don't take anything for granted so I am crossing my fingers as hard as I can and hope they stay in the new home I have provided for them.  I am exhausted and am now going to bed after a long and very productive day.
Email ThisBlogThis!Share to TwitterShare to FacebookShare to Pinterest
at 10:25 PM
Labels: closed SBB, entrance reducer, hive entrance, installing bees from a swarm, SBB, swarm cells, swarm collection