Yesterday it rained in Atlanta and Tom texted me at about 1:30 PM when the sun was just occasionally breaking through, that the bees at his house were "going crazy."  He sent me this photo that he took of the front hive: 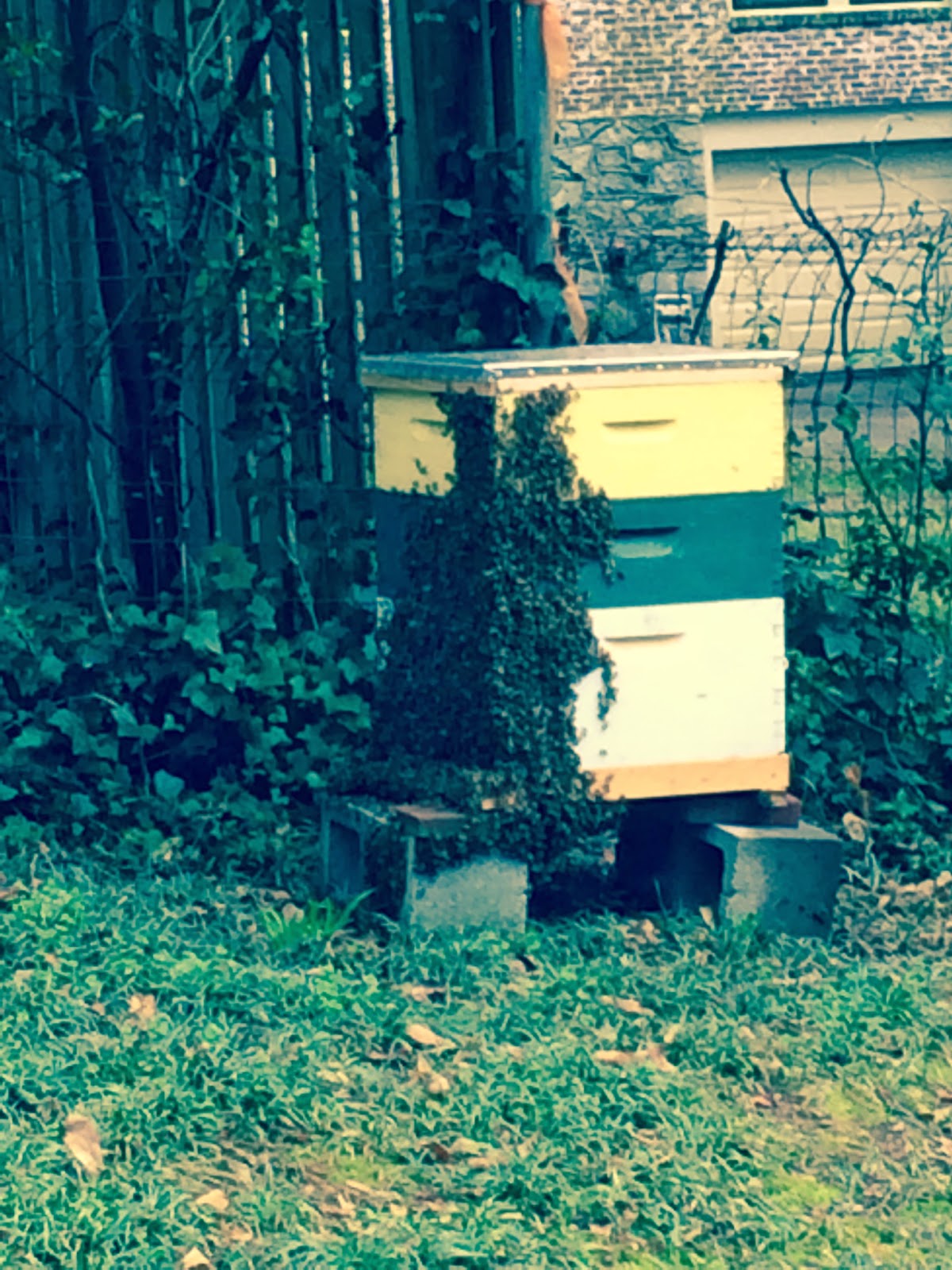 I told him they might not swarm until tomorrow but they would keep trying to get the queen.  Later he reported that he came home to find the bees gone - definitely they had swarmed and left.  He didn't see them anywhere.  Later that day he saw them up in a large pine tree on the edge of his property.

As I drove up to N Georgia, he said the hive was going crazy again.  Bees were everywhere and appeared to be gathering on a tree at about chest height.  I told him I would get Jeff and come to his house at 4:30 as I drove back into Atlanta.

Jeff was already there when I arrived and they were discussing that the bees were no longer in the pine tree and the group consensus was that the bees had moved from the pine tree to the shrub on which they now hung.  It was a HUGE swarm - about the size of two cats and gathered around a branch that hung down. 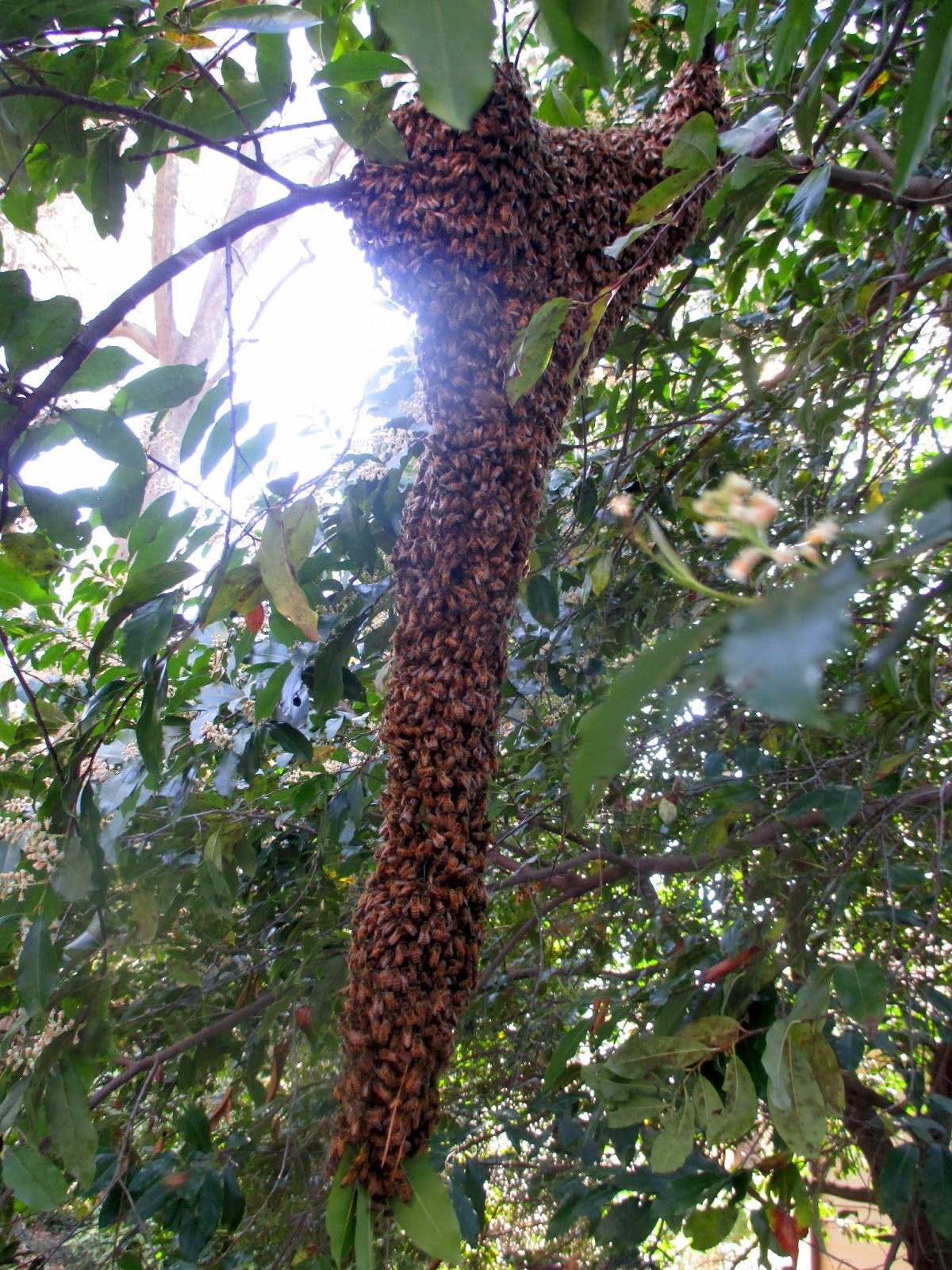 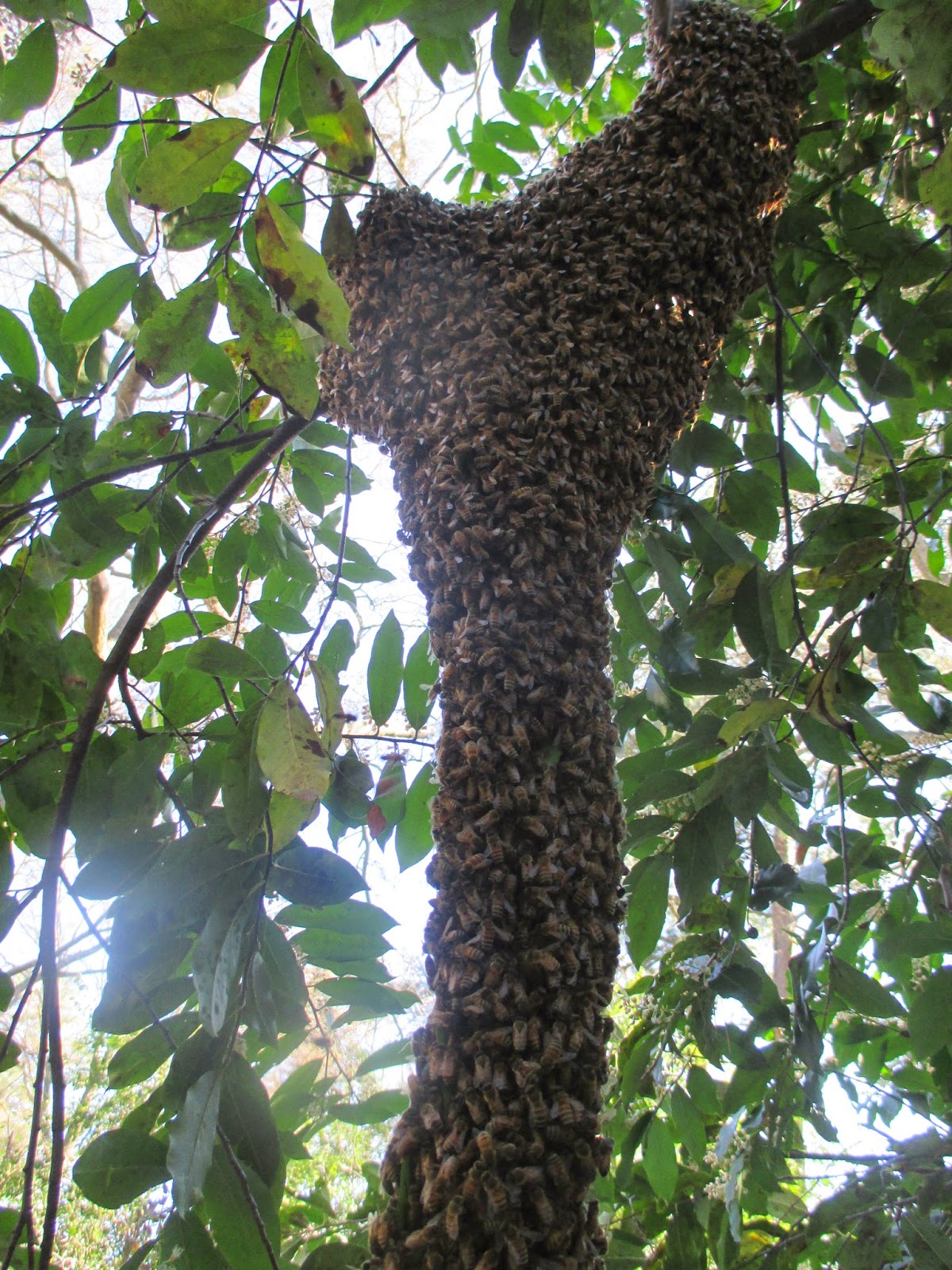 We spread a sheet under it and put a nuc box (looked really inadequate but that's what I had) on the sheet under the swarm.  We had brought the huge water cooler swarm catcher bottle.  Jeff climbed a ladder and although I was going to hold the bottle, it worked better for him to do it, so he was really the swarm catcher par excellence.

Jeff shook the branch and the swarm dropped into the nuc box.  We then had to shake the tree a couple more times.  I set the box onto the sheet again (one shake was directly into the box), and the bees began doing the nasonov butts in the air to let the other bees know the queen was in the box.  We put the nuc top on catty-corner, leaving openings for the bees to join Her Majesty and worked the other hive.  There were layers and layers of bees in this box. 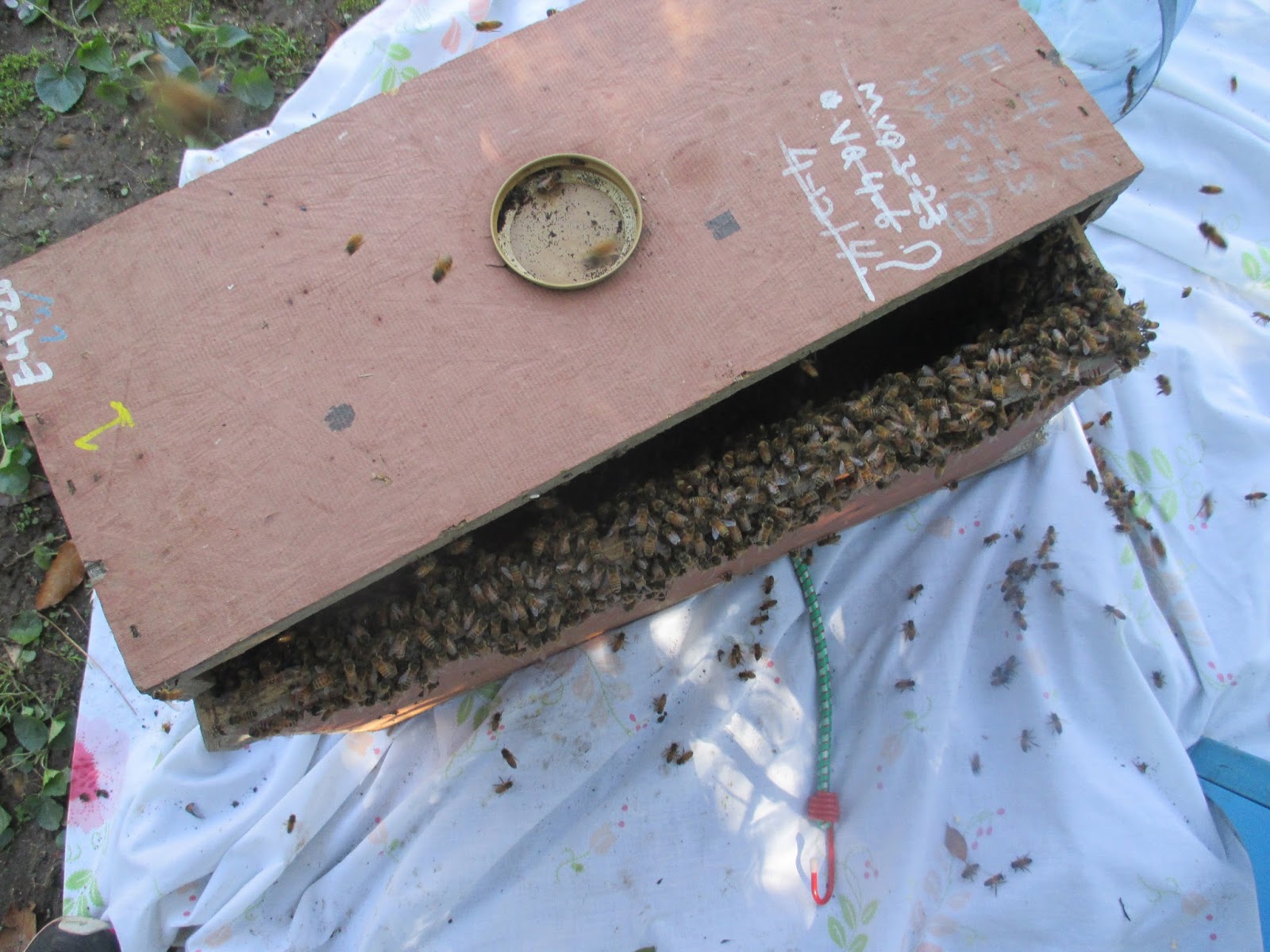 Because this hive had swarmed, we wanted to make a split from the back hive.  The second hive was full of queen cells.  We took a couple of frames with good queen cells on them to make the nuc.  The hive was left with at least seven other queen cells that we saw.  It too was preparing to swarm.

We have not been able to do good swarm control (ie, checkerboarding) because this hive was in a deep and a medium.  As a result you can't move frames in the checkerboard pattern because a deep frame can't move into a medium box.  We had given these bees all kinds of room but you can't argue with the Darwinian imperative to split and survive!  So we did our own split on the second hive.  They may still swarm.  I don't think they have already because we found a frame of eggs, indicating that the queen was probably laying today.

We made our nuc (in a deep box) up of both deep and medium frames.  At worse they will make drone comb off of the bottom of the medium frames.  But one of the queen cells we took was on a deep. 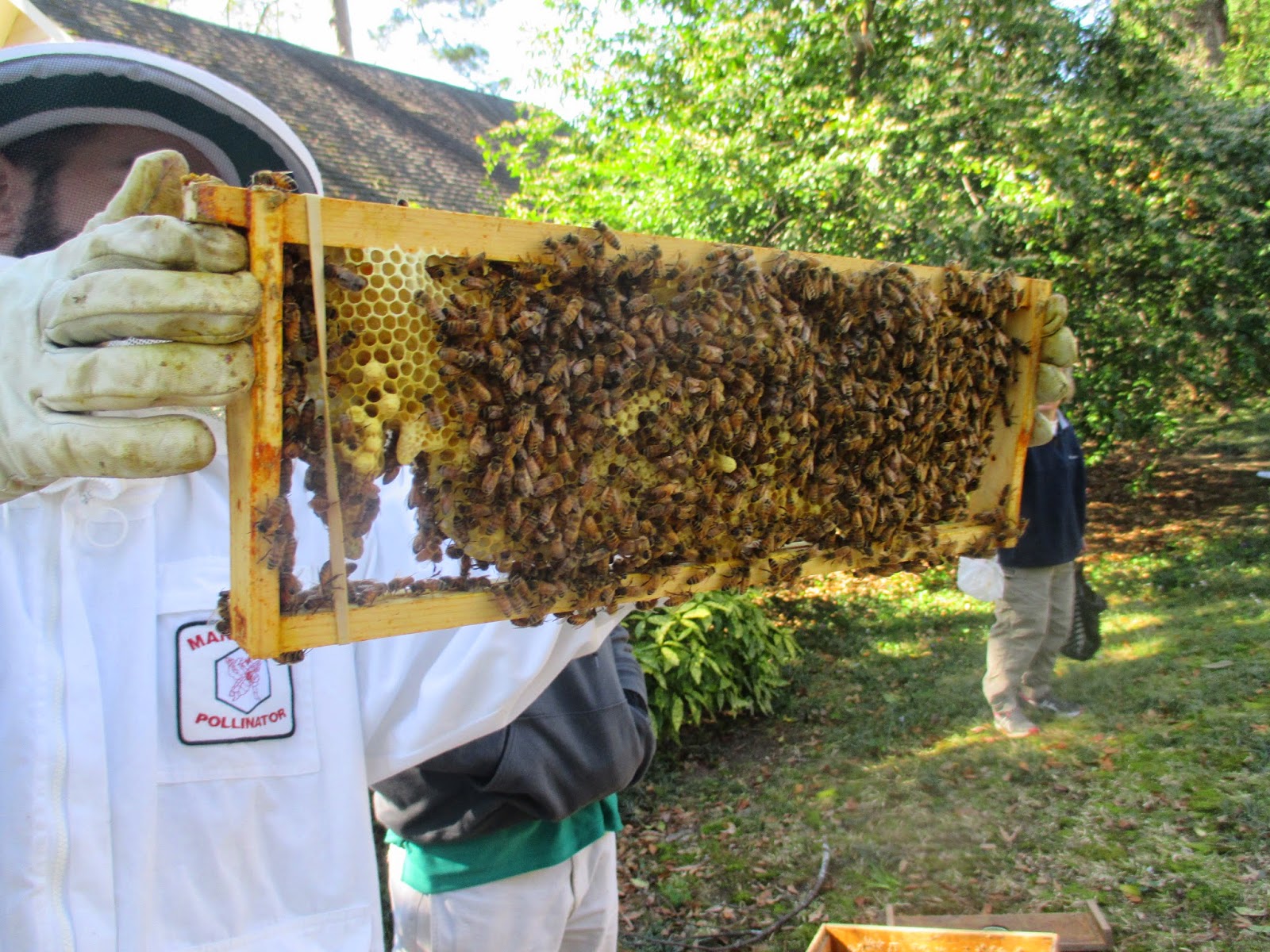 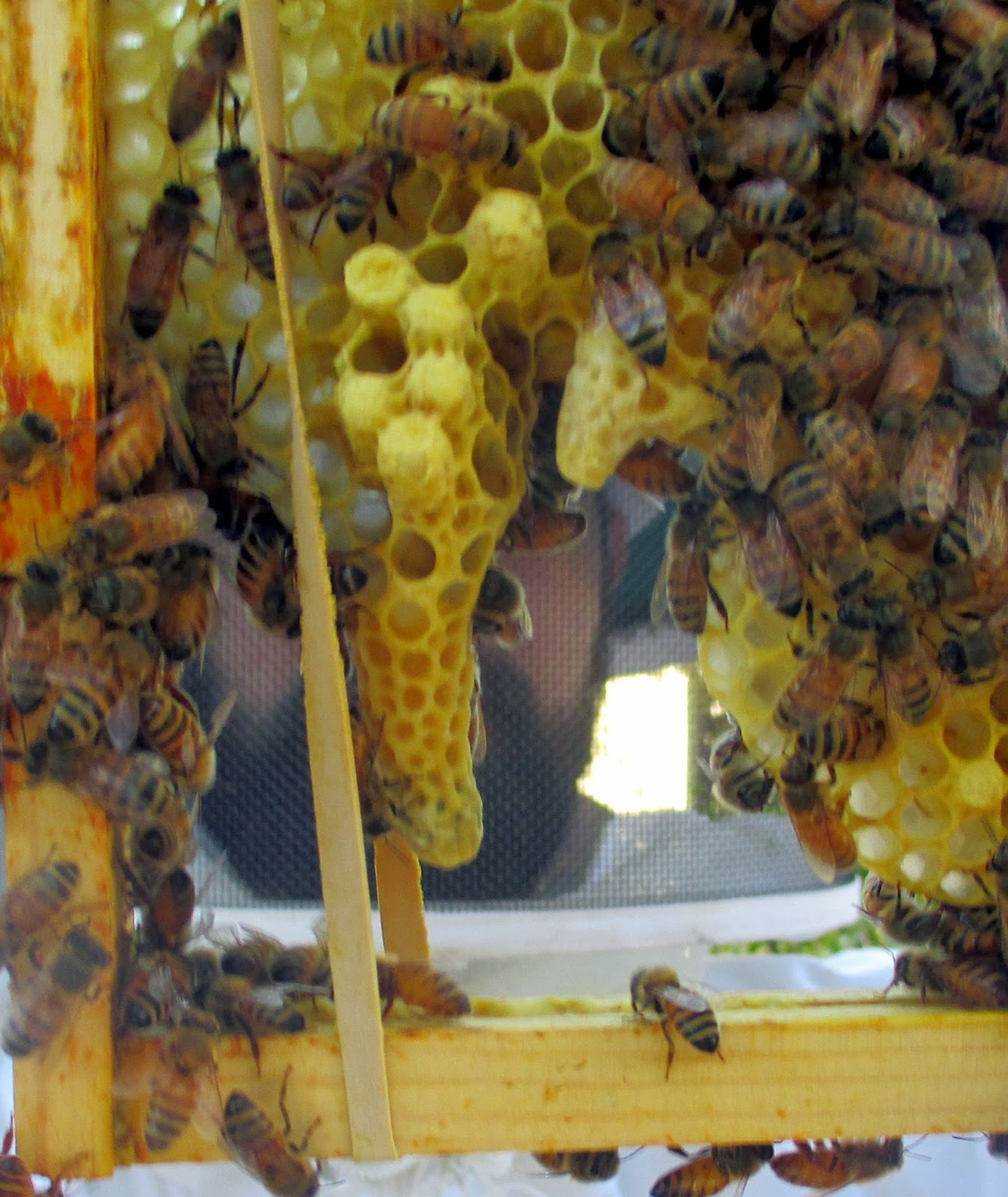 I'll cover installation in the next post.  You can see the capped queen cell near the rubber band and another queen cup with larva in it to the upper right.
Email ThisBlogThis!Share to TwitterShare to FacebookShare to Pinterest
at 10:00 PM
Labels: making a split, queen cells, splits, splitting, swarm, swarm catcher