What a Bee Day! Installing a Package at Loganberry Heritage Farm

Today was a two-three post worthy day.  At the beginning of the day, I drove to a farm between Dahlonega and Cleveland, GA.  It's a beautiful place - Loganberry Heritage Farm - where chickens run free and cows graze.  Sharon, the owner and a beekeeper, has hives there that she has been managing naturally.  We tried to get together last year but she follows the lunar calendar for guidance in beekeeping and there never was a day that I could come that was also good for opening the bee hives.

I was free to drive up today, though, so I loaded my car with bee paraphernalia and headed for north Georgia.  As I drove up, I got a telephone call from Tom.  The bees in his yard were swarming.  I couldn't do anything until I was done with Sharon, so I told him I'd be back in Atlanta and at his house at 4:30.

When I arrived at Loganberry Heritage Farm, Sharon, in a beautiful garden hat, had just returned from picking up four packages of bees to install.  She wanted me to help her check her hives from last year and to help her install one package so she could do the rest without me.

We went to look at the existing hives first.  They were located high on a windy hill.  I could see no real bee activity.  Some bees were flying in and out of the third hive but the other two looked pretty bee-less.  Sadly, these three hives were all in bad shape.  One hive had honey but no bees.  Another hive had a cluster of dead and molded bees about the size of a saucer over three frames.  The queen was dead right in the center.  The last hive had about a baseball sized cluster of bees in a medium box.

Upon talking this through, she and I decided that in the cold of the mountains where she is, up on that hill is probably too cold for the bees to winter well and perhaps they needed a more sheltered location.  She thought she might try to rescue the baseball sized hive by moving it into a nuc box and seeing if they could build back up.  Because she doesn't have any other hives that are going, she can't add to the resources by putting in a frame of brood and eggs.  I think they will not survive, but maybe she can make it happen.

We then installed the package into her beautifully painted hives, each with a hive top feeder. 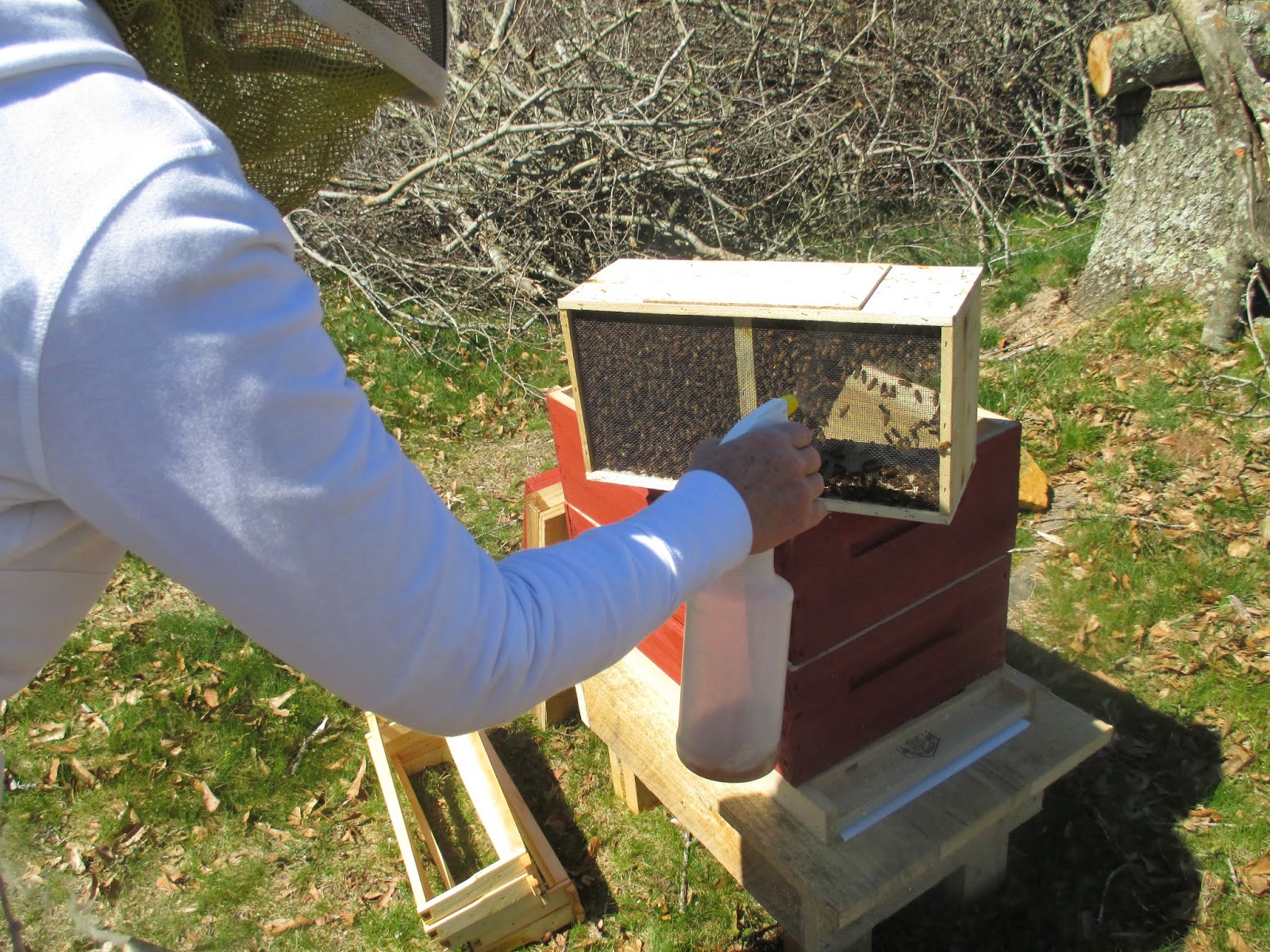 First the bees are sprayed with a bee tea that Sharon had made with honey. 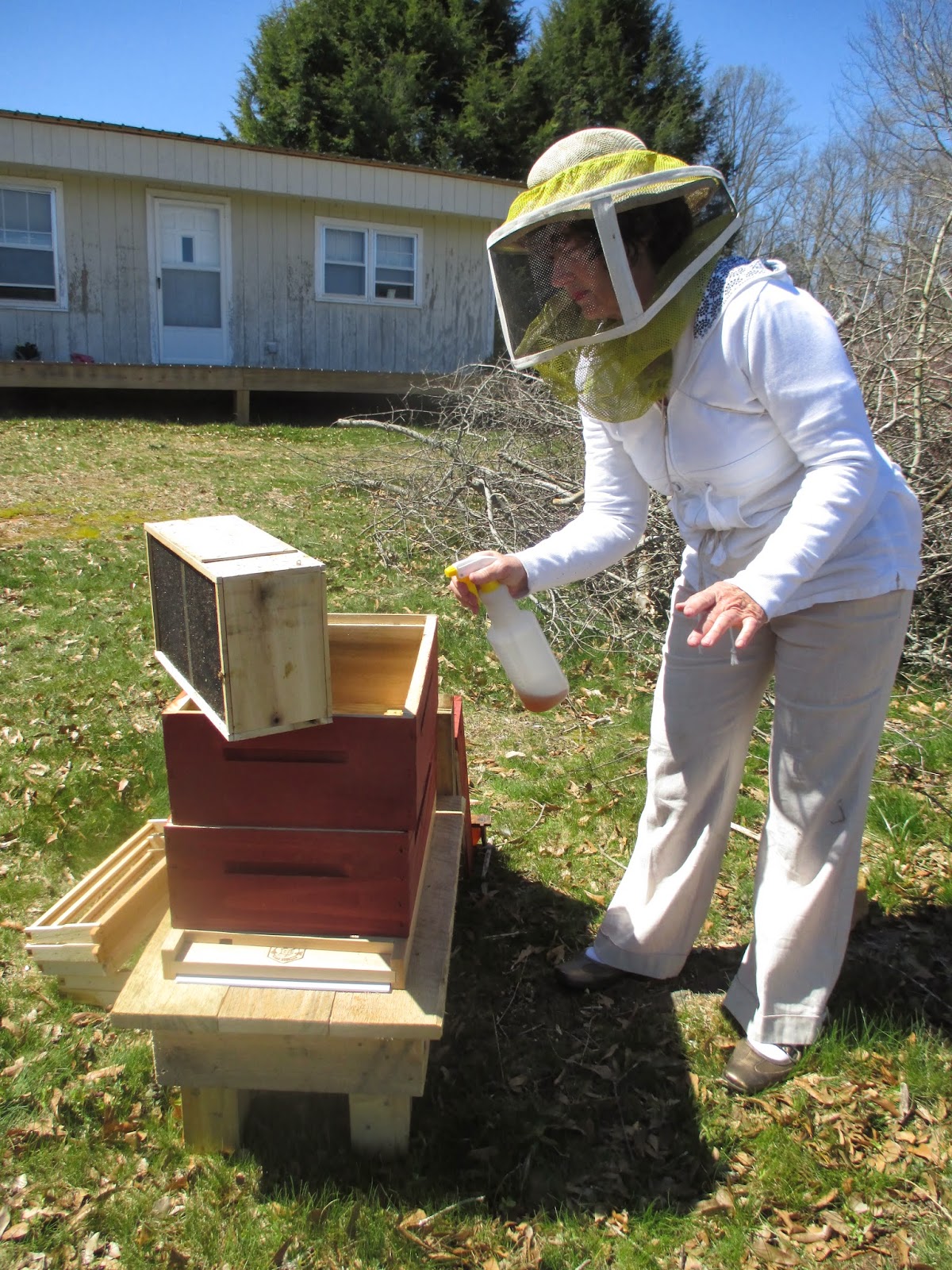 Then she removed the cover to the package and lifted up the feed jar. 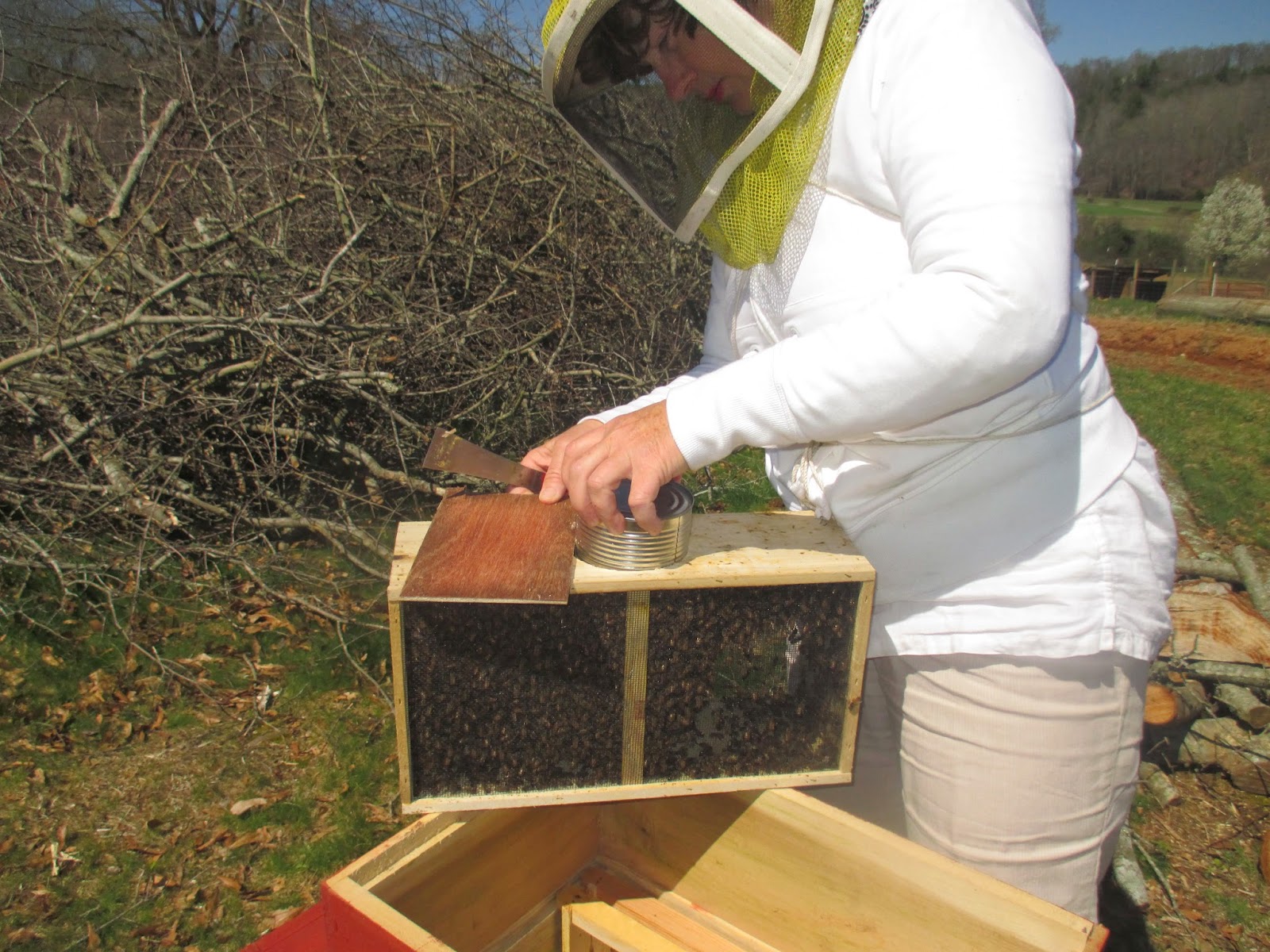 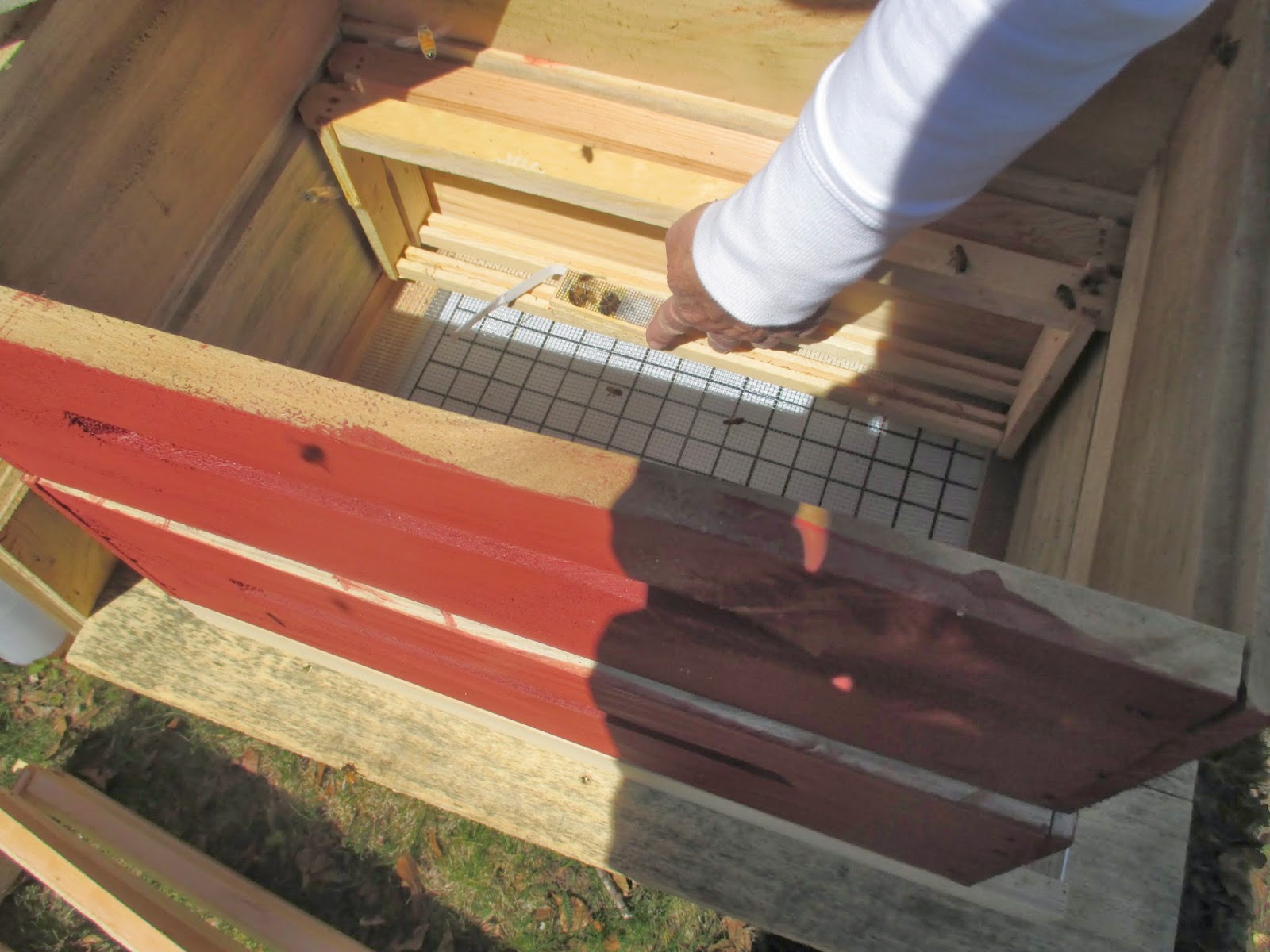 We put the queen in her cage on the bottom bar of an empty frame (before we placed her there we removed the cork at the candy end of the cage). 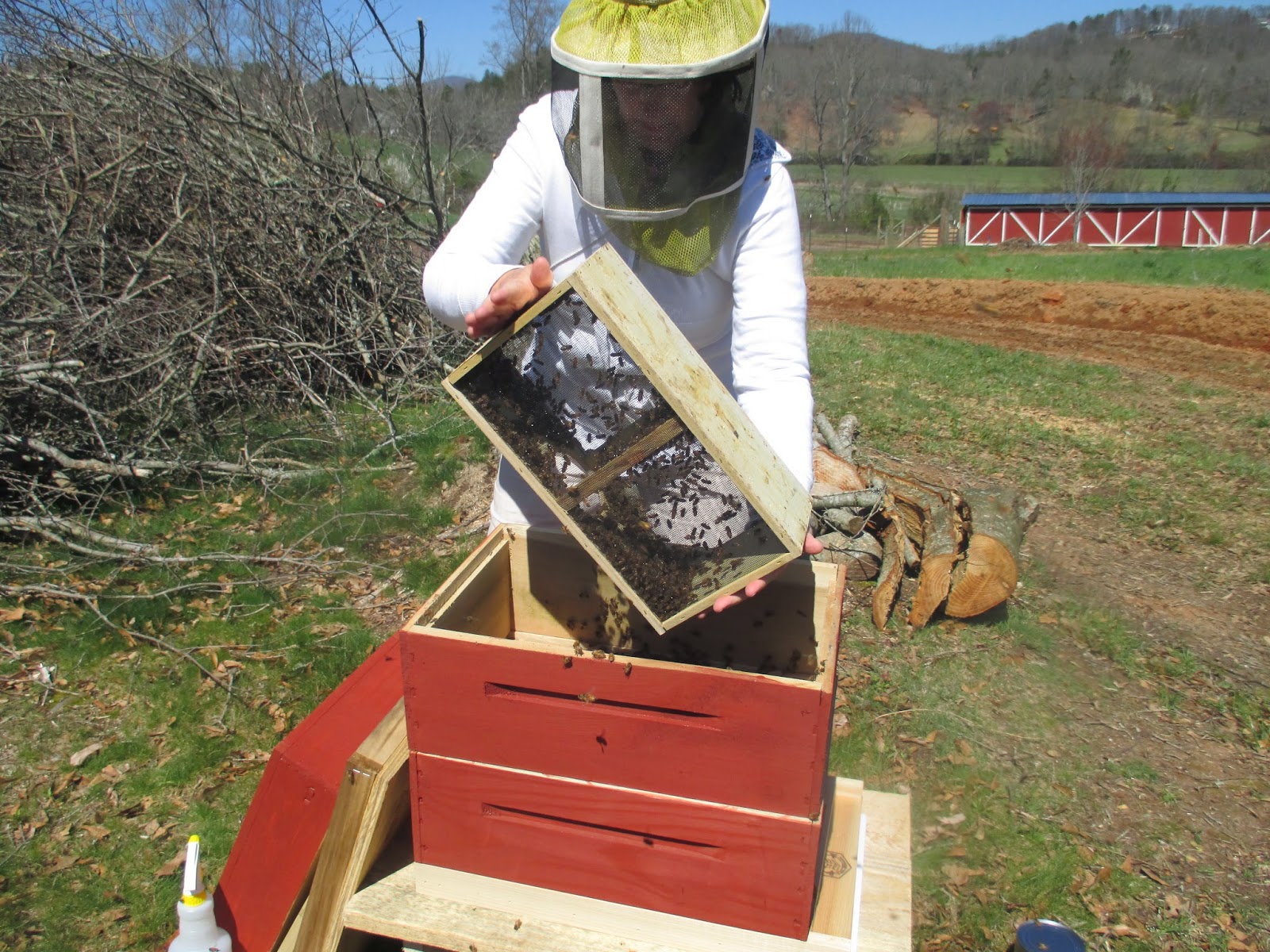 Then it was time to shake in the bees.  We used an empty box as a funnel through which to shake the bees (keeping most of them in the box instead of on the ground.) 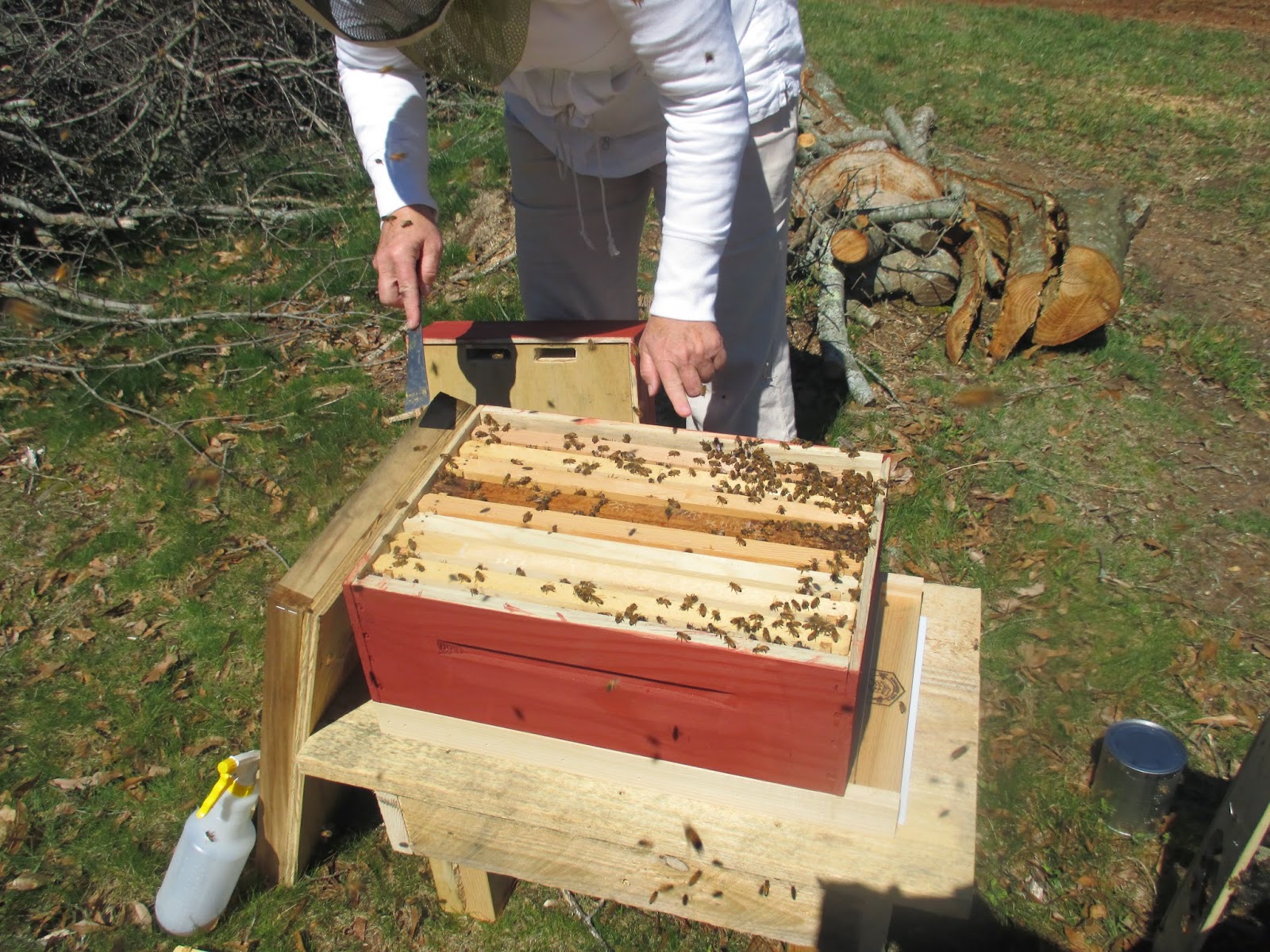 Then we put back in the frames for the bottom box.  We put on her hive top feeder and the inner cover.  Then we put the jar of syrup over the inner cover hole and used another hive box to surround the feeder.  These bees will be well taken care of by Sharon in the days to come.