Julia ran a Chastain Conservancy inspection on Thursday.  We didn't know how it would work on a weekday, but I believe there were 11 people who signed up and were there.

We had two hives to check - her overwintered hive that hasn't done too well and the swarm that I was given about a week ago for a MABA teaching hive.  I ran an inspection there on March 15 and forgot to take a single photo.

I did take a few photos on the 9th.  We had a good day.  The inspection was in the morning. 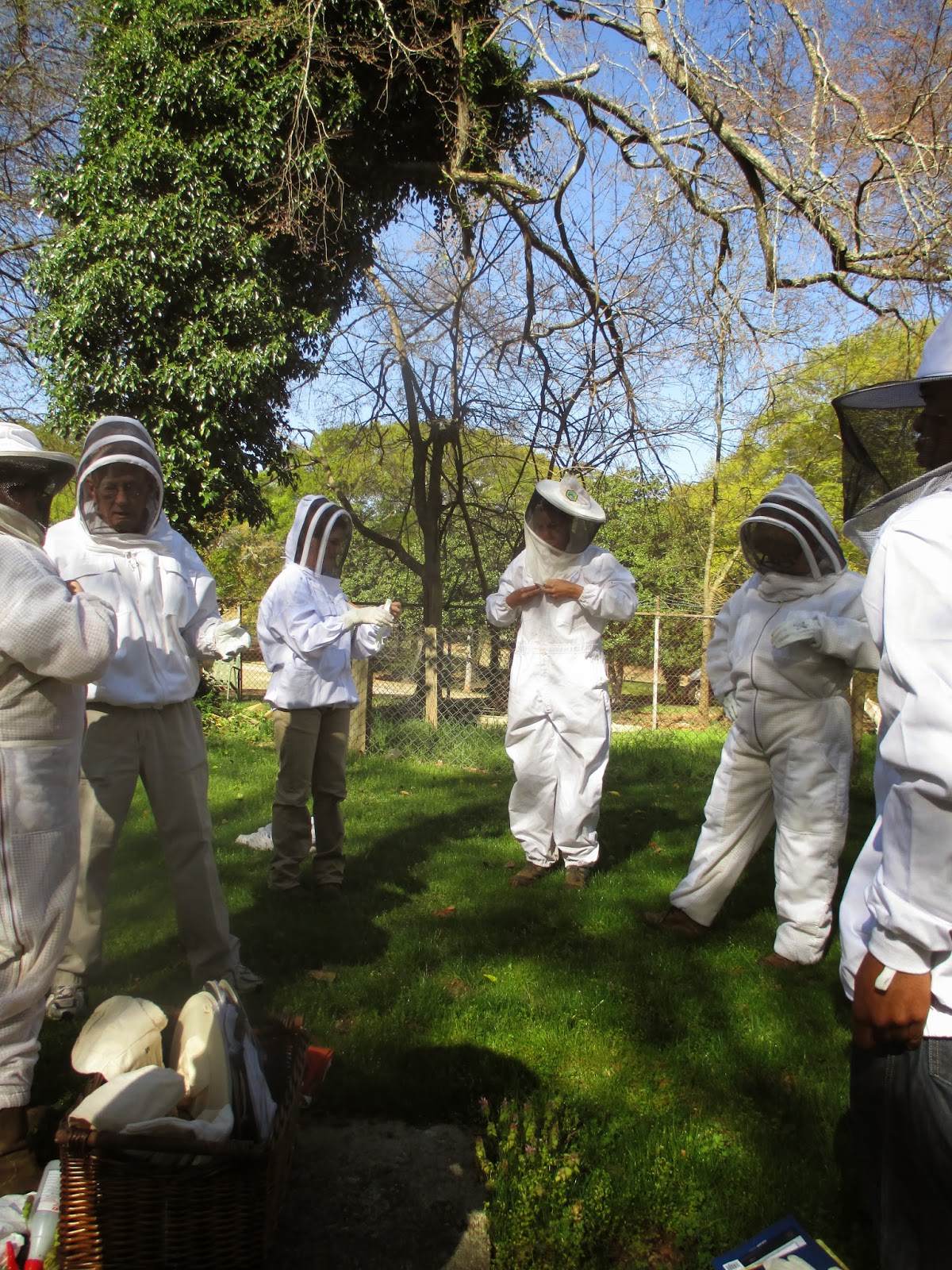 First Julia talks to the group in general about opening hives and about how we use/don't use the smoker, foundationless frames, hive drapes, and medium boxes. 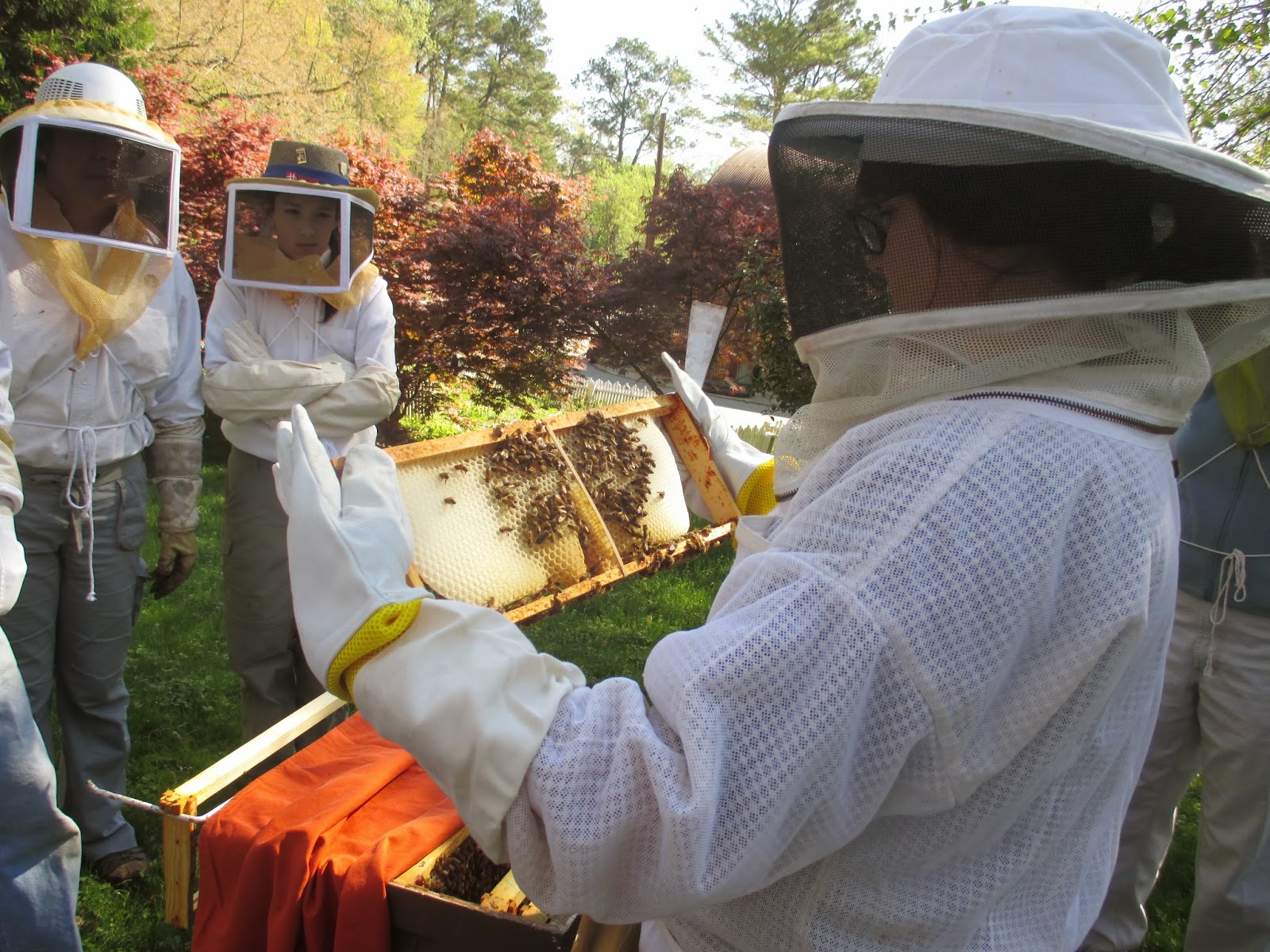 Here she is showing them and looking at a frame that I had rubber-banded into place at the inspection on the 15th.  Instead of chewing up the rubber band, the bees had incorporated it into the comb. 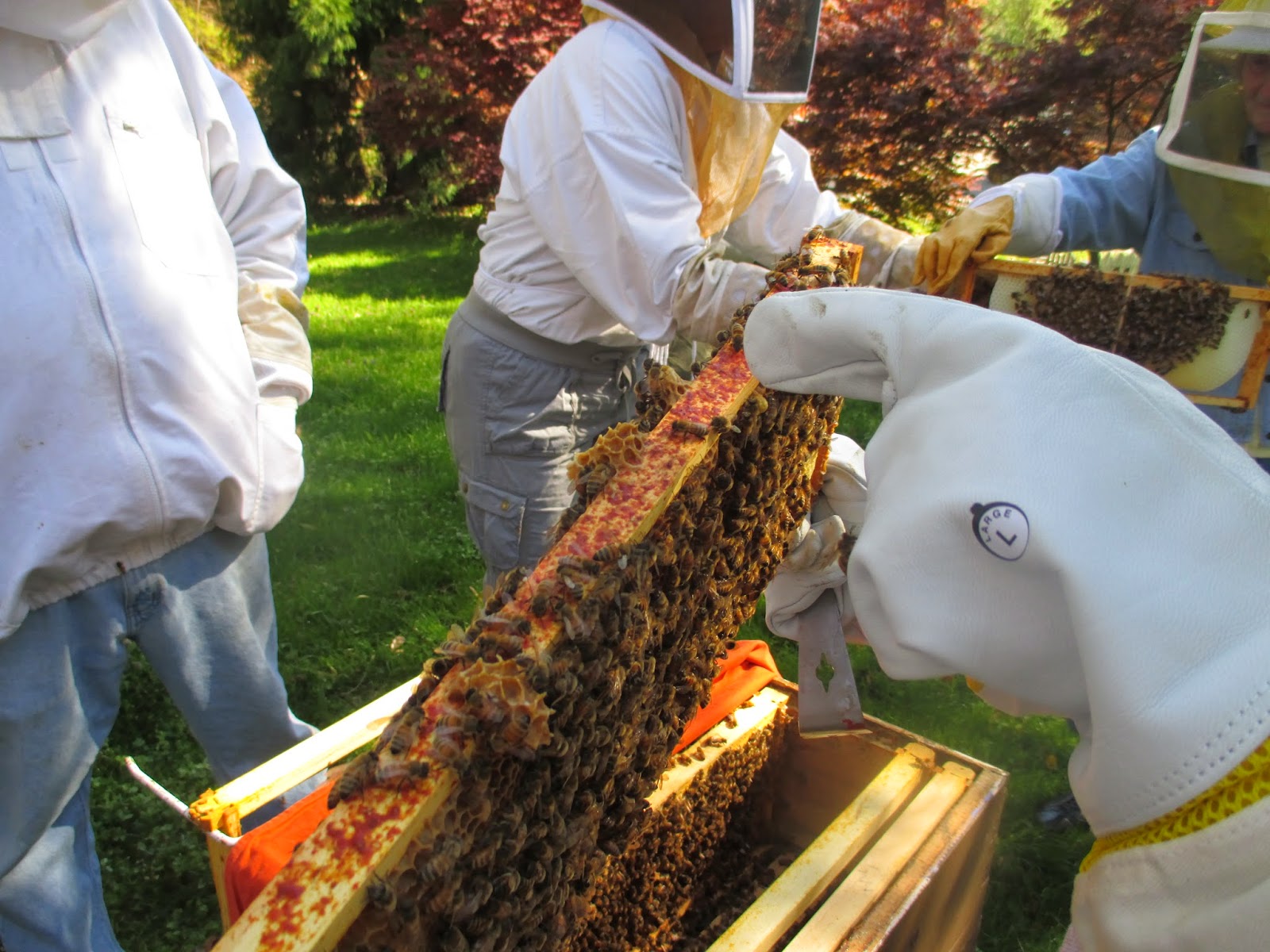 We saw queen cups AND 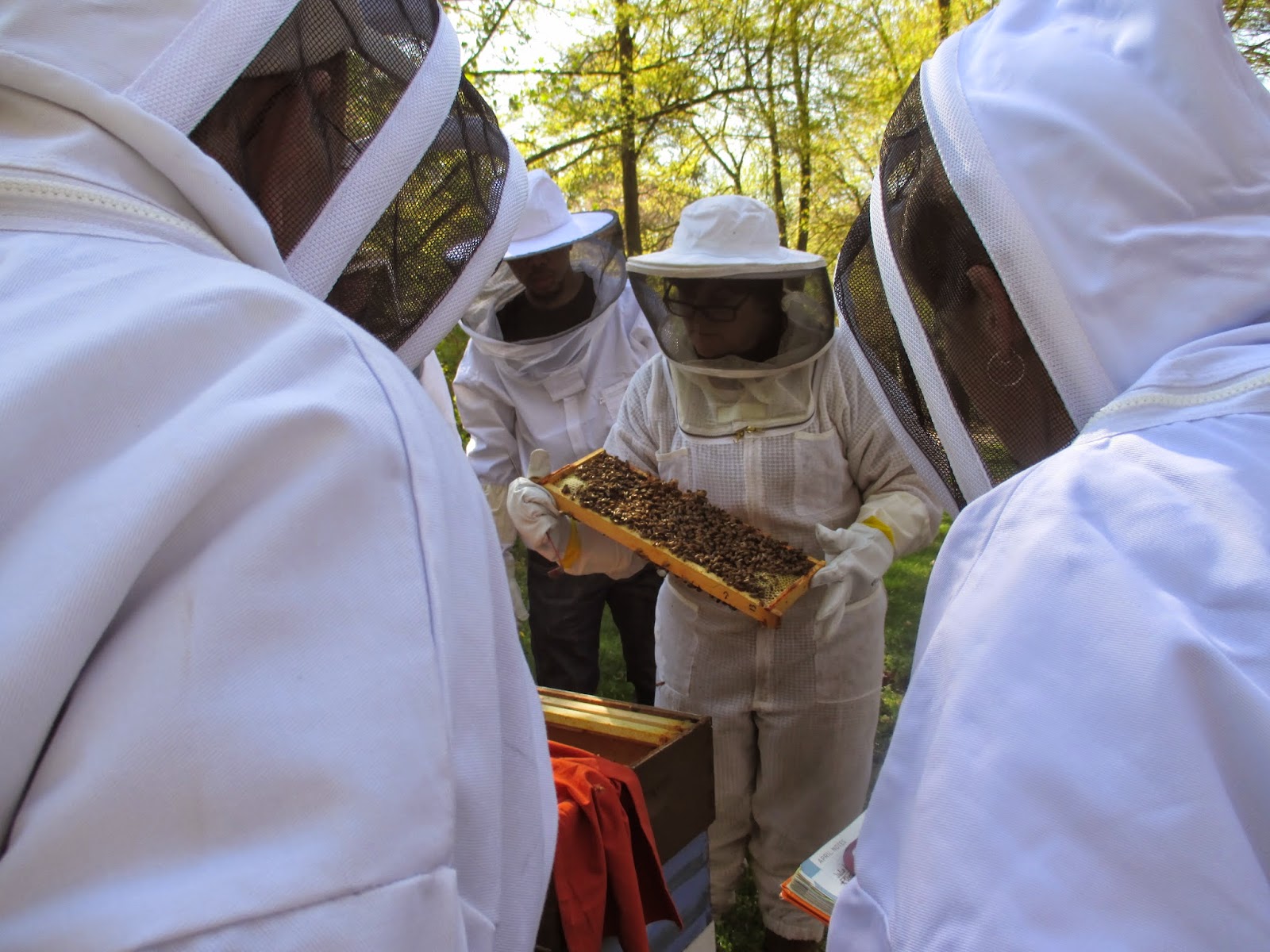 we saw the queen, although I apparently didn't get a photo of her (I thought I had.....). 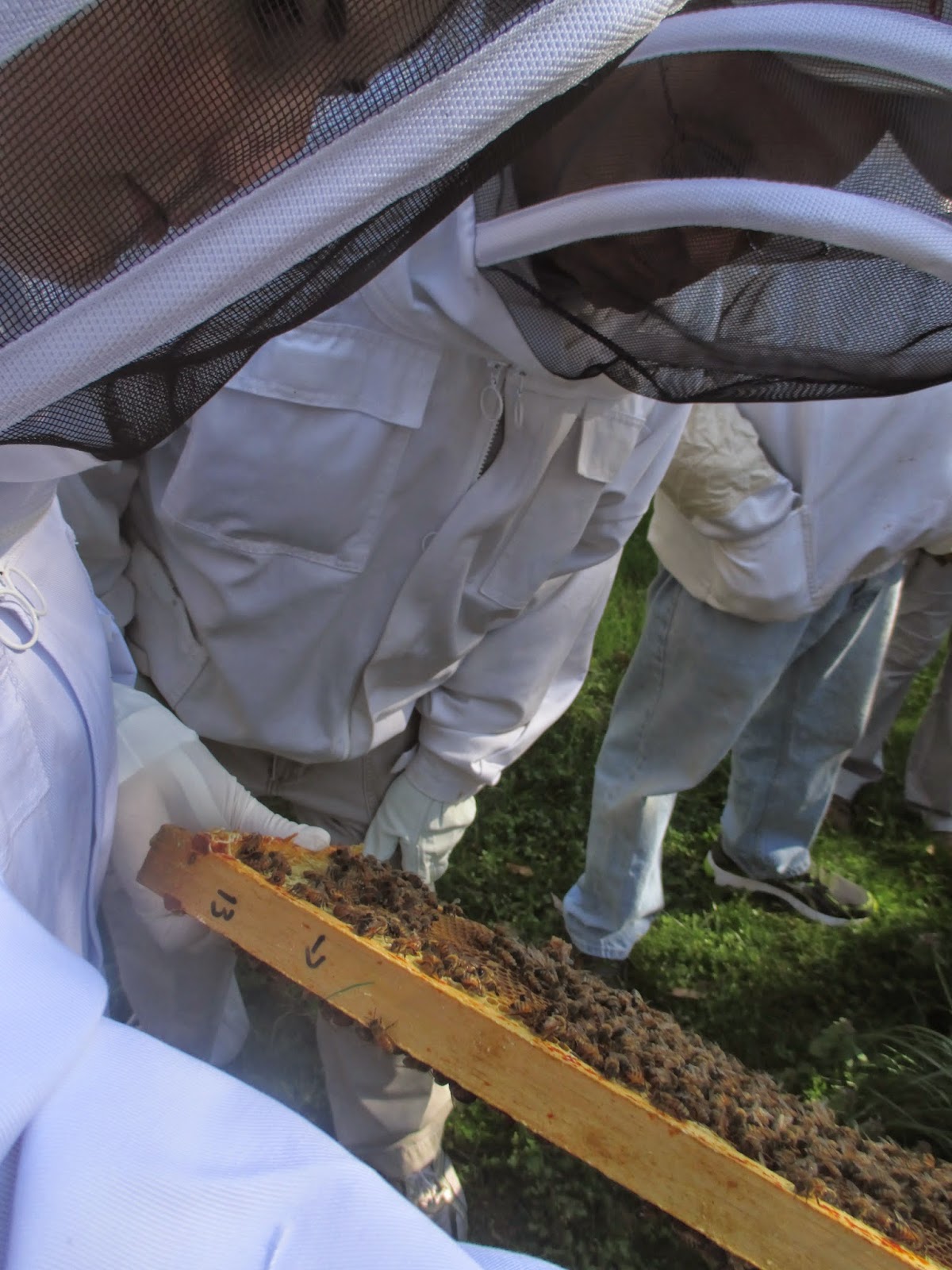 I opened the swarm hive (sorry, no photos - forgot to hand the camera to Julia).  It was a perfect demonstration of how much the bees prefer foundationless frames.  The person who donated the swarm to MABA also gave us 8 frames with plastic foundation.  I had put the swarm in two boxes - the foundation filled box below and foundationless above.  The bees had barely drawn any wax on the plastic, but had fully drawn all the frames in the top box (foundationless)!

Even though in a tree, they would build down, and thus actually use the bottom box, I decided to go ahead and give them a box of foundationless on top.  So they are now in three boxes but are not really using the bottom box.  There was a well-trained Ga Tech engineer on the inspection and she helped me level the hive (it was rather off kilter).

Everyone got to see brood, eggs, and the queen in Julia's hive.  They got to see the advantage of foundationless frames in mine.  It was a very successful inspection and learning experience for all who attended.