Yesterday after the Chastain inspection (I'll upload photos in another post), I came home to check on my own hives.

What a great year this is so far!  My first hive that I checked was from Sebastian's - a major hive, doing well.  In every hive at home my goals were to make sure there was evidence of a laying queen and to see if they needed new boxes for honey.

Sebastian's hive was putting up honey with great enthusiasm.  Most of it looked dark.  I'll be interested to see how their honey changes over time and with the new blooms.  Currently holly is coming to the end of its bloom and there are lots of flowering trees of all types blooming in Atlanta. 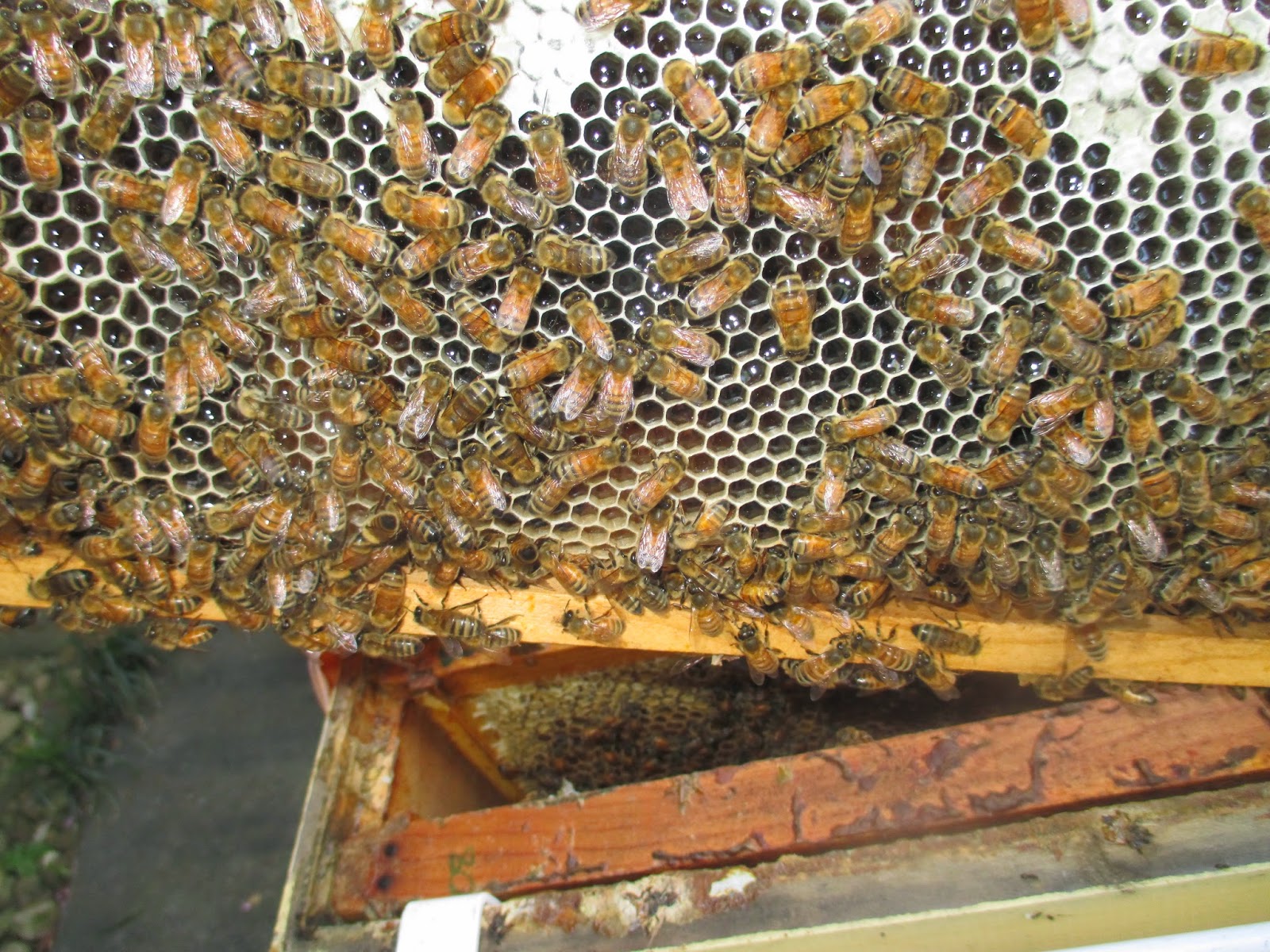 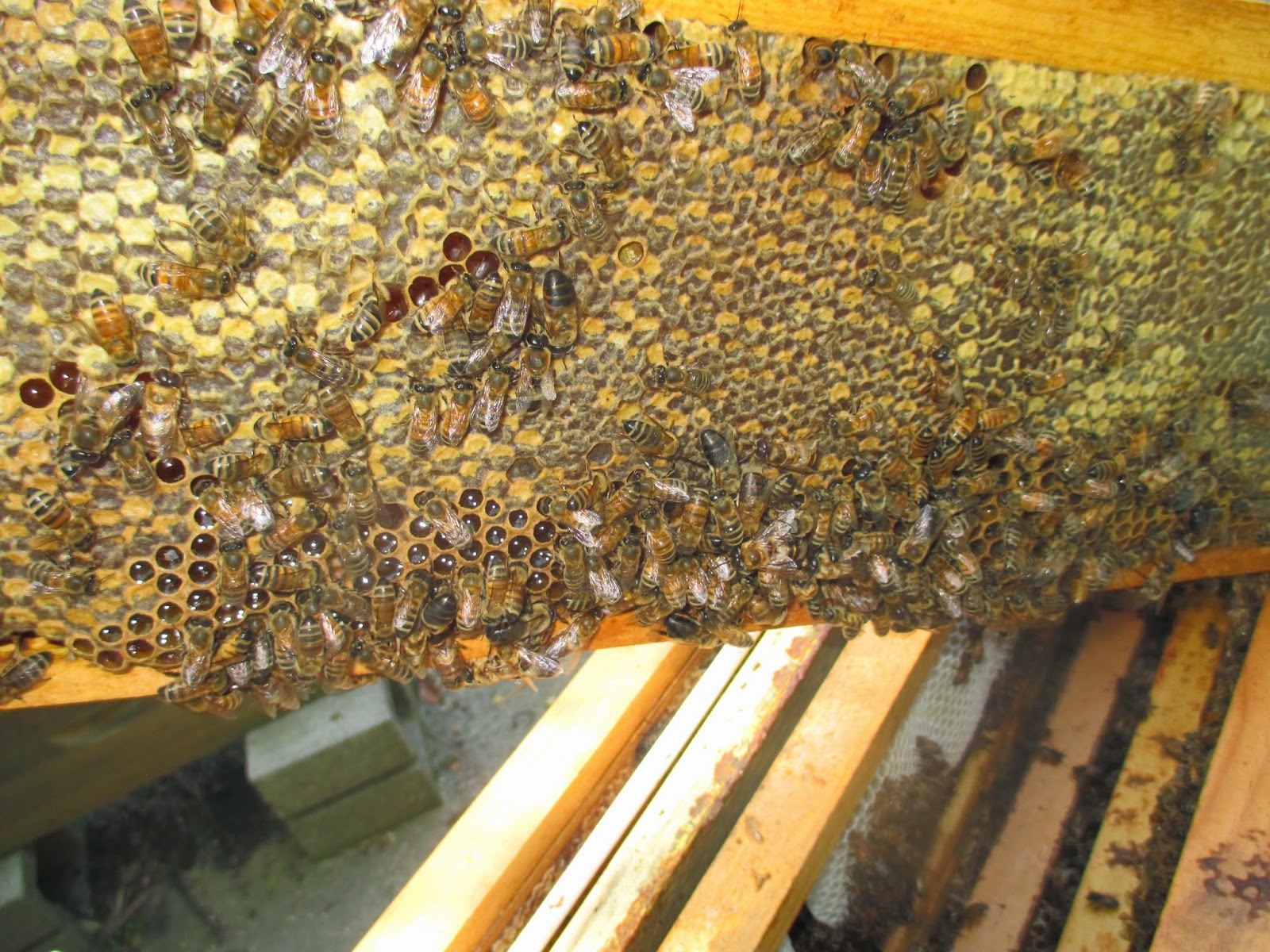 They were also doing a lot of wet capping (see photo above).  I don't know how bees decide:  "Wet?  Dry?"  What sort of reasoning (if any) is involved in whether the honey has wet (you can see the honey dampening the back of the wax cappings) or dry (bright white cappings not touching the honey).

This hive needed an extra box as they had completely filled the top box.  So I did the work of the extra box addition before I went on the the lower boxes to look for queen evidence. 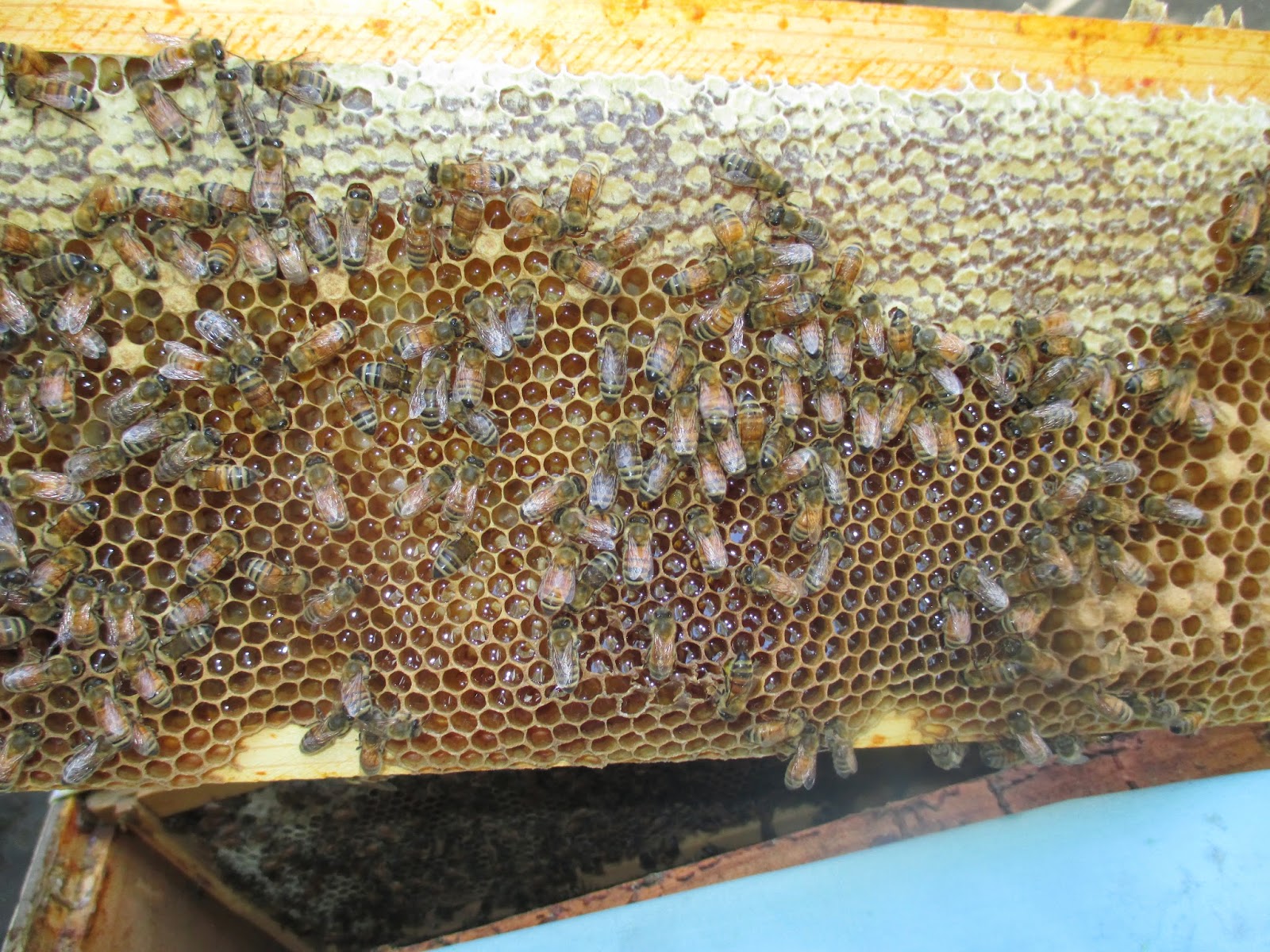 To checkerboard the honey box and to help me with weight, I got the new 8 frame box full of empty frames and set it on the inner cover.  I took frame #2 from the box on the hive and hung it on the frame rack on the side of the hive.

Then I reached into the new box and got frame #2 (empty).  I put it in the old box on top of the hive in position #2.  Then I took original frame #2 on the rack filled with honey and bees and put it in the now empty #2 slot in the new box on the inner cover.

Then I lifted the original box off of the hive (now half as heavy) and set it on the new box on the inner cover and continued with my inspection.  I found eggs in the third box (the hive was stacked five high) so I ended my inspection.  Lifting now boxes four and five back onto the hive was much easier and the bees have lots of open storage available to them.

Moving on to the first swarm from Tom's (been here since March 30 - so about 11 days), I checked it for eggs and honey.  They were doing great, building out frames, etc. but didn't need a new box yet.  I saw eggs and not the queen. 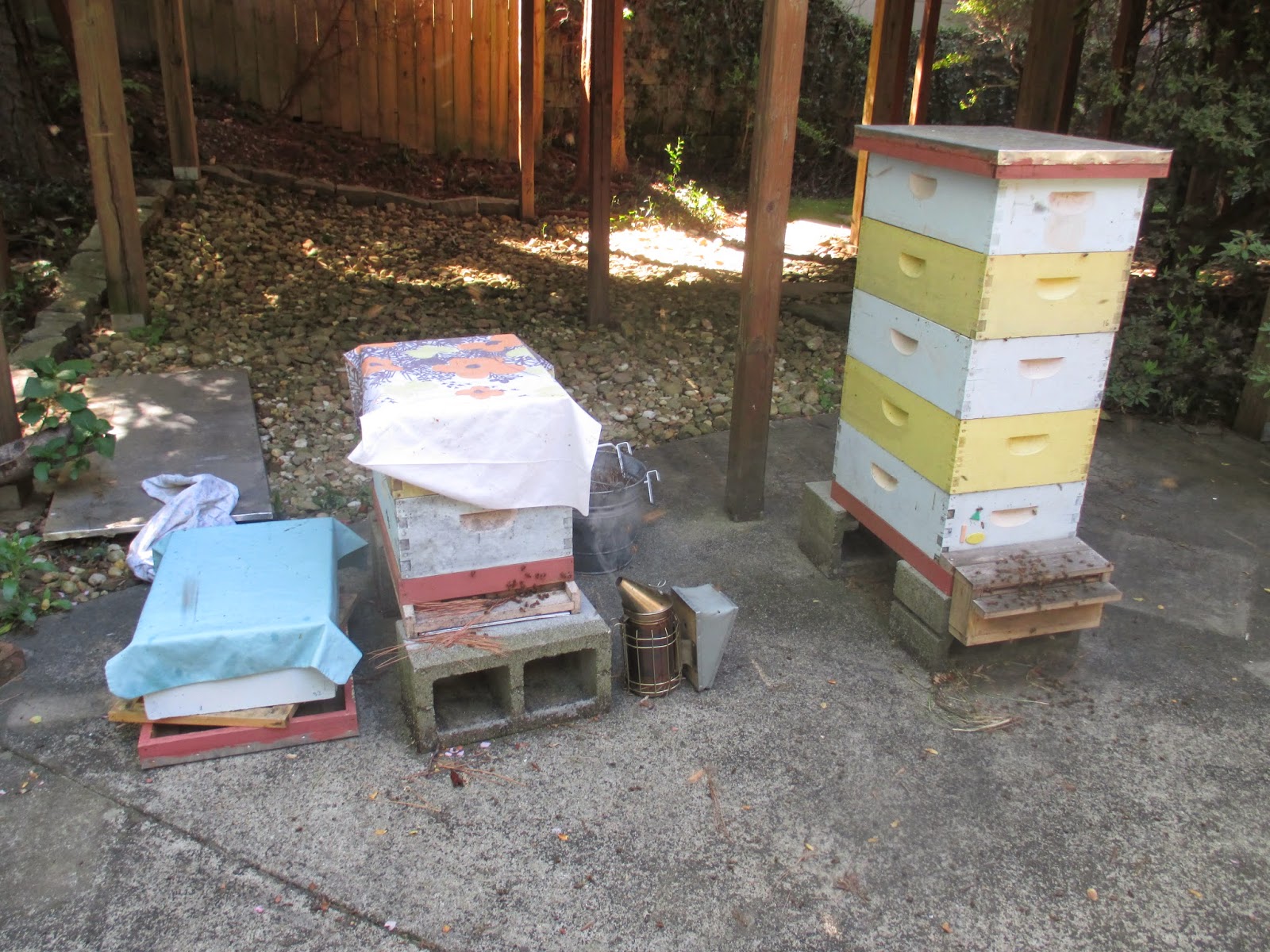 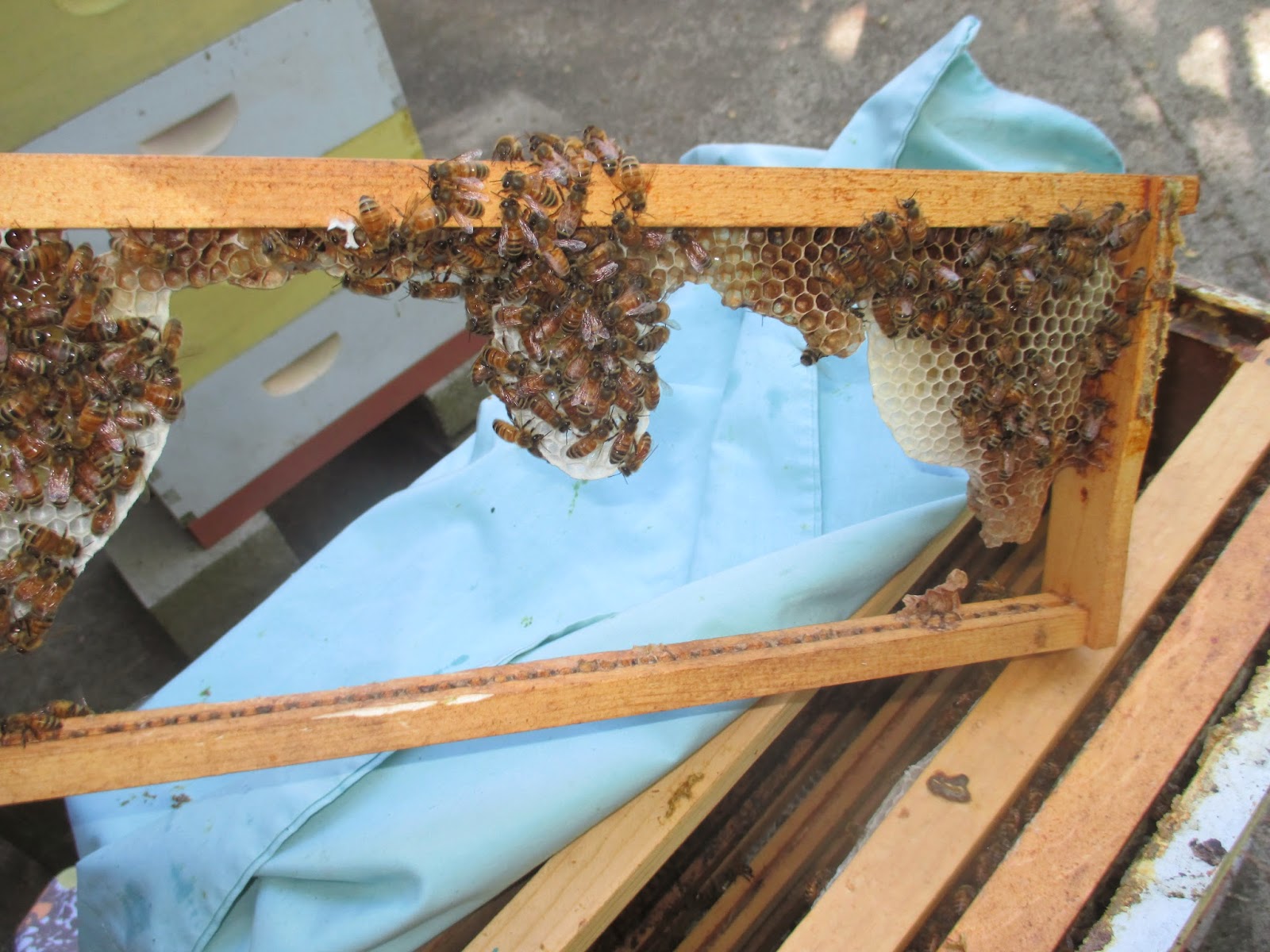 The next box I checked was the Northlake swarm that overwintered so well.  Bees are really buzzing around this hive and I have wondered if it had swarmed.  It's top box (#5) was full with honey and busy bees.  I added a new box (the sixth) to this one the same way I did with the Sebastian hive. 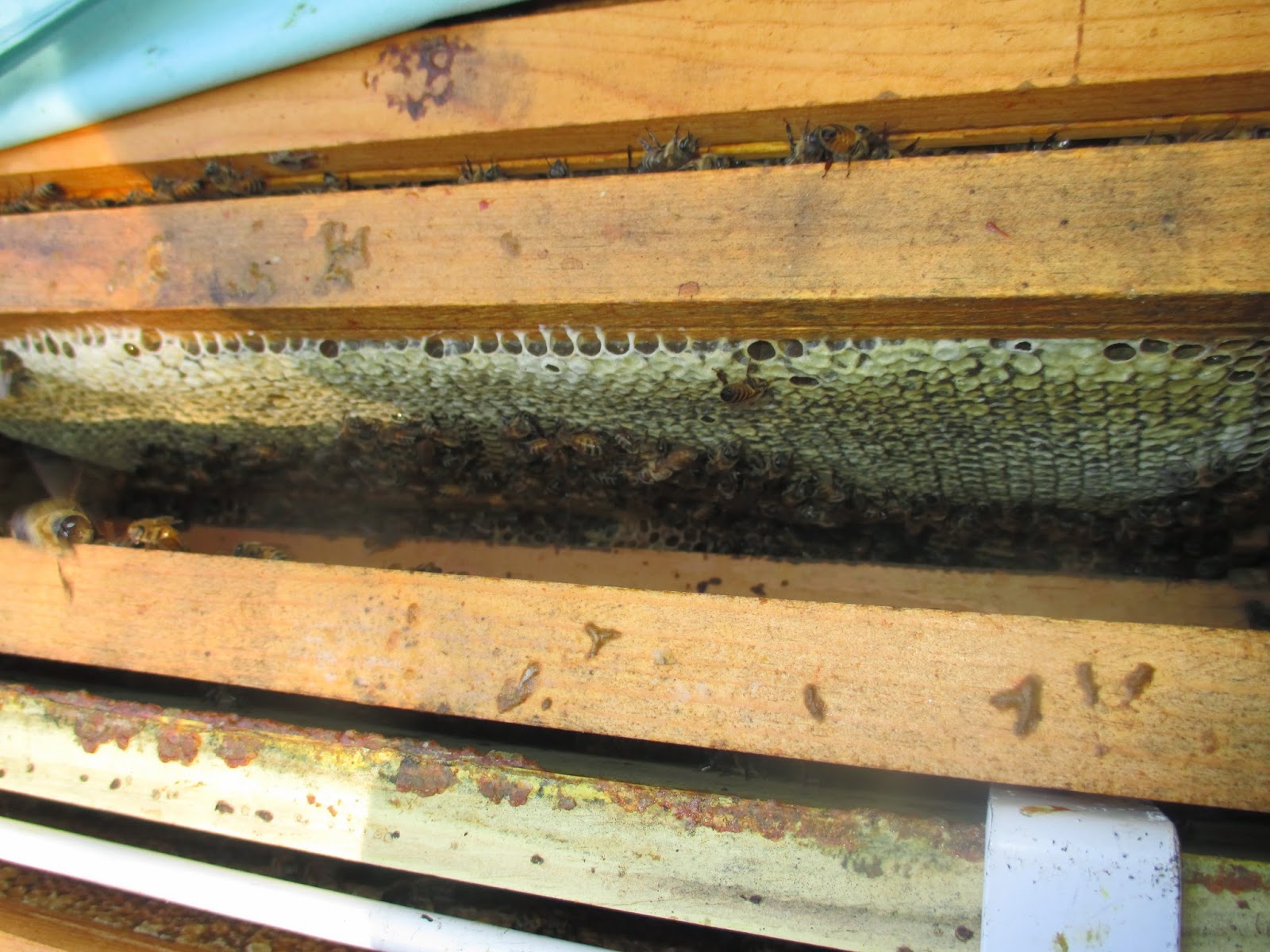 My inspection of this hive was a little disturbing in that I found the third box down (first brood box) was full of drone brood, as was most of the next box.  I did find a little worker brood and when I saw eggs they were laid in worker cells, so I'm hopeful all is well.  They certainly are bringing in the honey, even if their queen is laying drones.  I didn't see any queen cells and only a couple of queen cups, but I didn't go all the way through the hive.

The last thing I did was to add a box to the nuc split that Jeff and I made at Tom's also on the 30th.  They are bringing in pollen like mad and I wonder if their new queen has already emerged.  It was a beautiful queen cell and perhaps was a week old, so conceivably, she could have.  Anyway, I didn't inspect since the rule of thumb is to leave a split like that for three weeks, but I did give them a new box in case they needed storage room.  I didn't do it the same way, since it's just a five frame nuc and because the last thing I'd want to do is destroy/injure the queen cell or the new queen.  Instead in the new box, I put a fully drawn frame of comb in the center of the box.

So the bee news here is good.  Next weekend, I go with Joe of "Growing a Greener World" to install his nucs at his house.

Email ThisBlogThis!Share to TwitterShare to FacebookShare to Pinterest
at 11:35 AM
Labels: drawing comb, dry cappings, installing bees from a swarm, making a split, wet cappings