As most of you know, I don't use foundation.  I have gone through quite an evolution of approaches to reach what I am doing this year.

In the very beginning I used thin surplus wax foundation because I didn't think plastic was natural and didn't want it in my hives.  Then I started following Michael Bush and cut wax strips.  I waxed them into the grooves in the frames to give the bees a starting point.  Then the next year I decided after listening to Jennifer Berry that we were all better off with NO commercial wax with its chemical composition of fluvalinate and coumaphos.  So then I started using craft sticks glued into the groove.

In December on Christmas Day I slipped on ice while hiking in N Georgia.  I didn't know it then, but I tore my posterior tibia ligament and I have been slowly, s...l....o.....w......l......y healing since then.  I still am wearing a wrap on my ankle and tennis shoes every single day.  When bee season started, standing for a long time meant a terrible burning sensation around my ankle bone.

So I have been doing lazy beekeeping.  When my frames have old comb in them that needs replacing, I remove the old comb.  But I haven't been waxing or gluing ANytHing in and the bees are making beautiful comb without my giving them any starting place.

The photos are blurry - I used my iPhone and it doesn't accommodate my shaky hands. 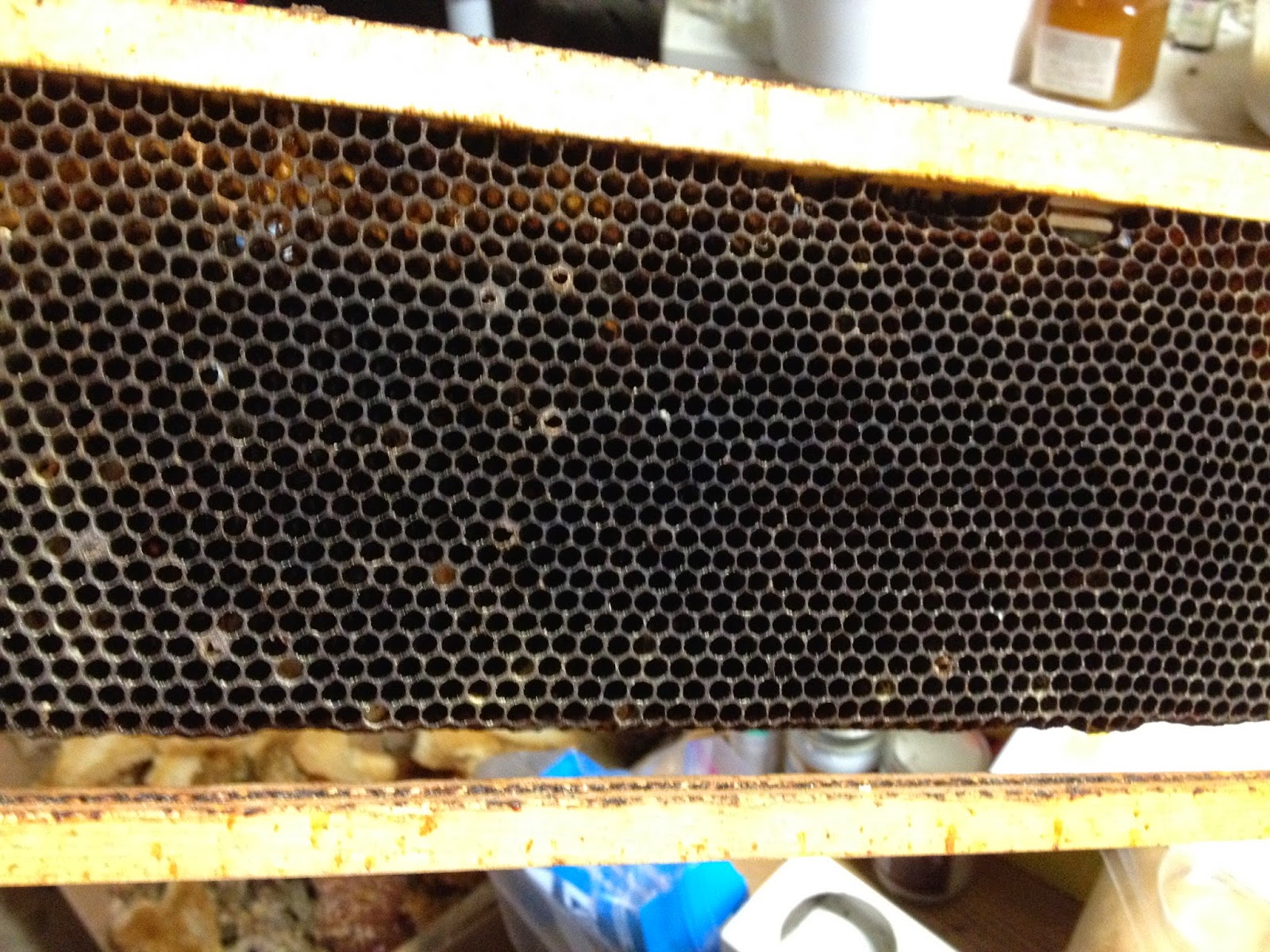 Tear out old comb (really blurry, but it falls into a box of removed comb): 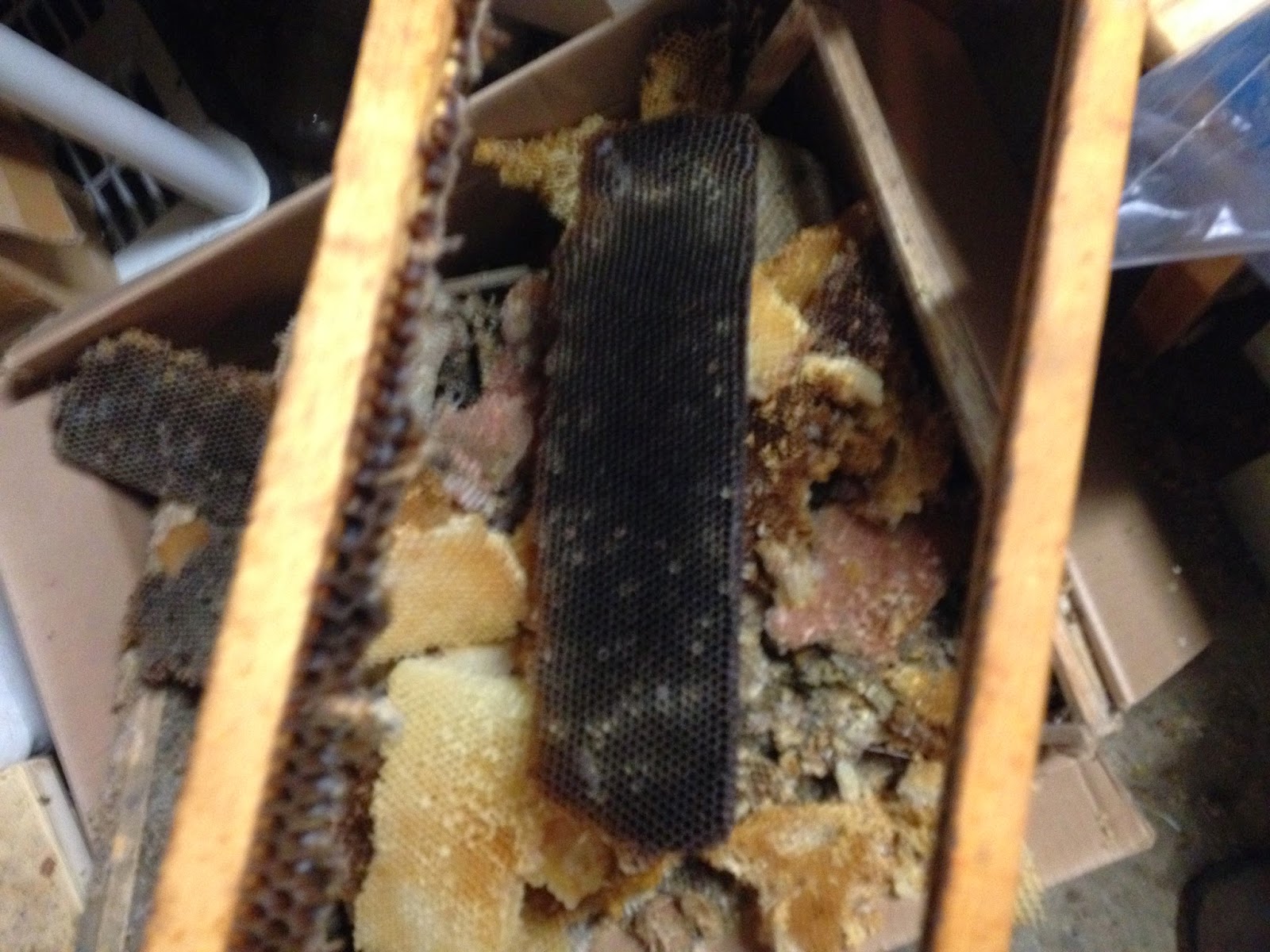 In a stewpot of boiling water, immerse the frame for 30 seconds.  Obviously the whole frame won't fit into the stew pot so I put in one half and then the other. 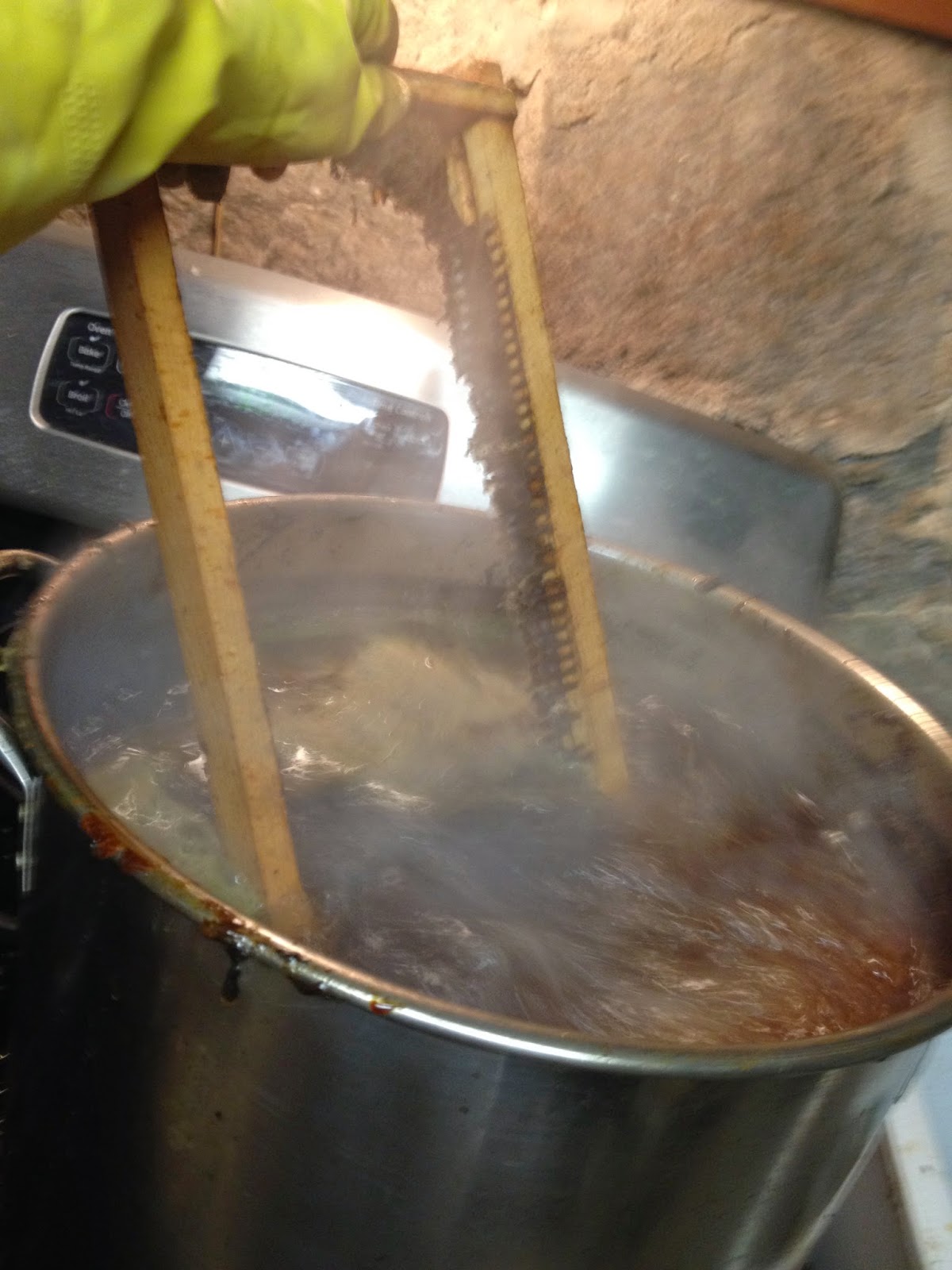 It isn't in the water long enough to even think about warping and all the wax melts off.  Meanwhile because I do four boxes worth of frames in one stew pot, the water in the pot is laced with melted wax so the frame gets slightly coated with melted wax.  This alone may stimulate the bees to build comb.

I use a skewer or a hive tool or whatever I have to slide along the groove and effectively mess up the patterns for any crooked comb left by the bees.  In the photo below, the right side of the frame has been submerged already and the left side still has old comb on it. 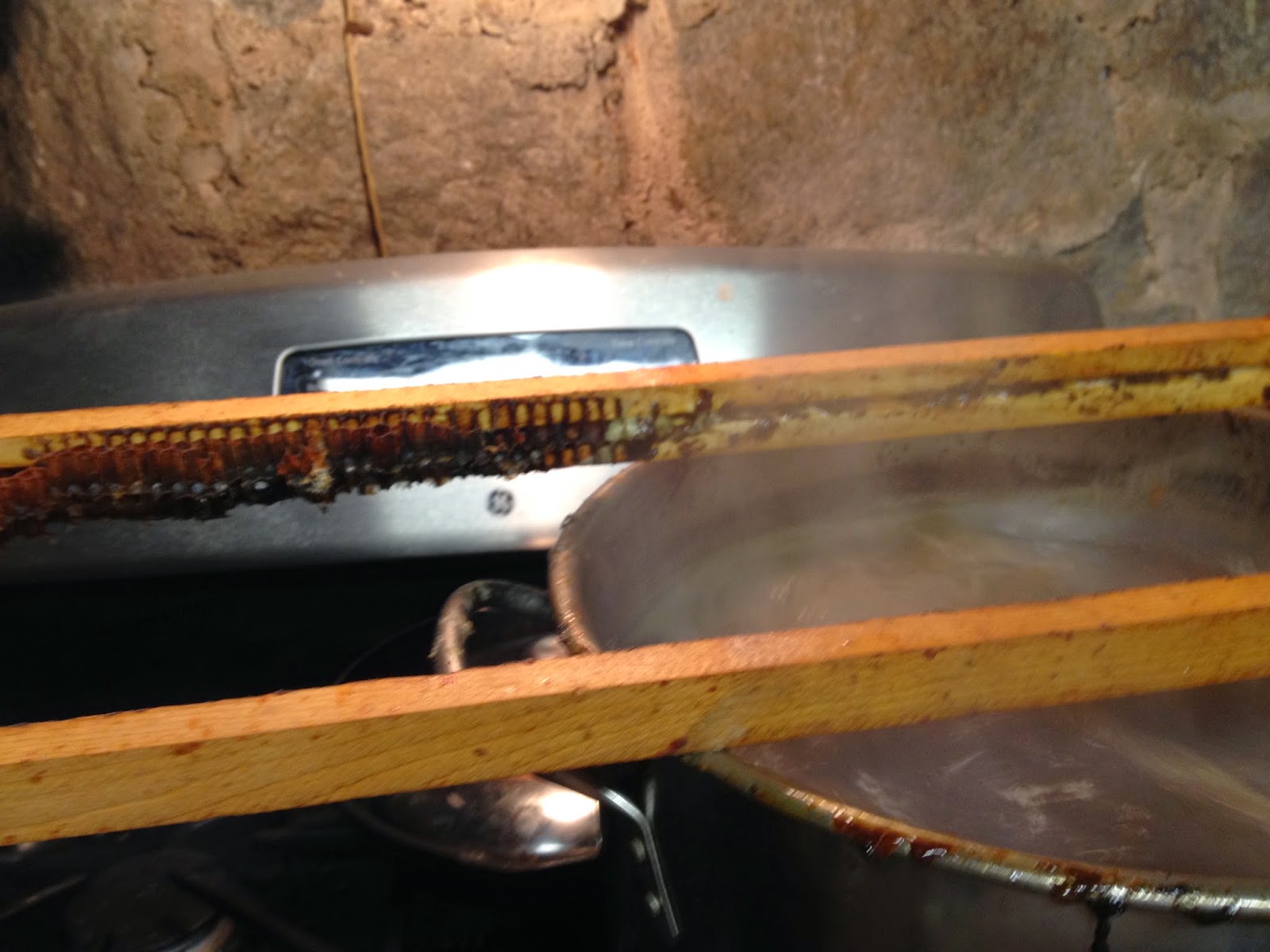 The water is boiling hot so it quickly evaporates and the frames are ready in seconds to be put back in the hive box. 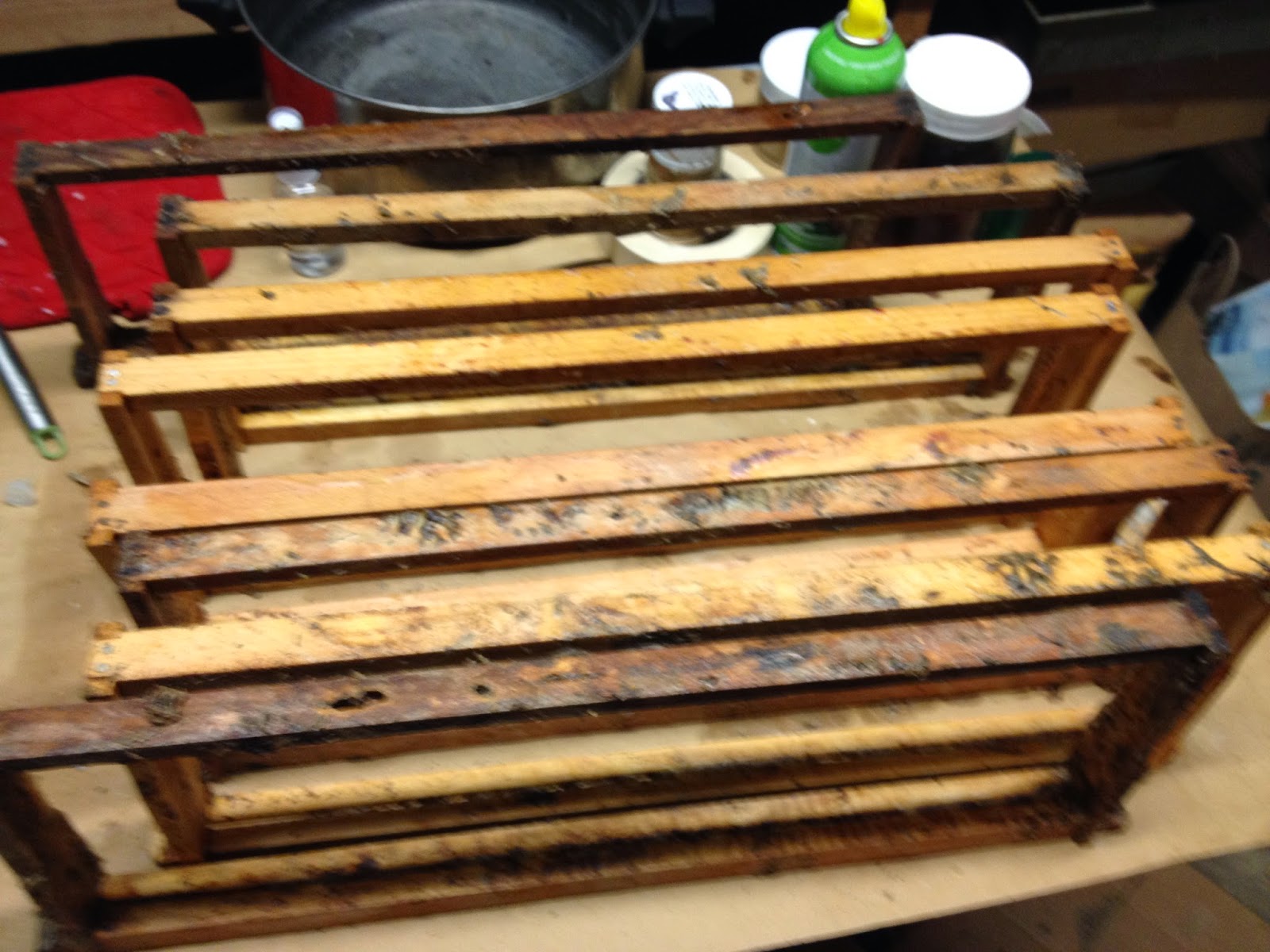 With nothing but their bare nakedness, I put the frames onto a hive and the bees build happily.  I do checkerboard as in the post just before this, and that brings the bees into the box, but obviously they don't need my time or craft sticks to know where to start to build their comb.

I am not finding that crooked comb happens often.  When it does, it's in a hive where there has been a tendency to build crooked comb and many beekeepers suggest that that tendency is a genetic anomaly - not great genetics for comb-building = crooked comb.

And if you don't correct it, the bees continuously build crooked comb to parallel the mess they made at the beginning.  But mostly the bees build straight beautiful comb from the bare top bar and appear to be happy campers about it.