I don't think I've posted this year about my hives and where they are.

I have one hive at Chastain Conservancy.  It's a teaching site for my bee club and Julia, Noah and I all have hives there.  I have one hive that was made from the swarm that a beekeeper donated to the teaching cause.  It came to us on April Fool's Day and has done well.

I checked on it today, planning to take a frame of brood and eggs from it to another hive.  BUT they had requeened themselves.  I found the opened queen cell and many others that had been opened.  The bees were quiet and contained.  They had many cells cleaned and polished waiting for the new queen to start laying.

This must have been a well-regulated plan in that they had two frames of capped brood, about ready to emerge (dark biscuit) and probably their new queen is in the process of her mating days right now.  This means that when the capped brood was laid, they made a queen cell from one of those eggs.  The queen emerges in 16, compared to 21 for the worker, so she has emerged (before the remaining brood laid on the same day) and should soon start laying.

So I didn't take a frame from them! 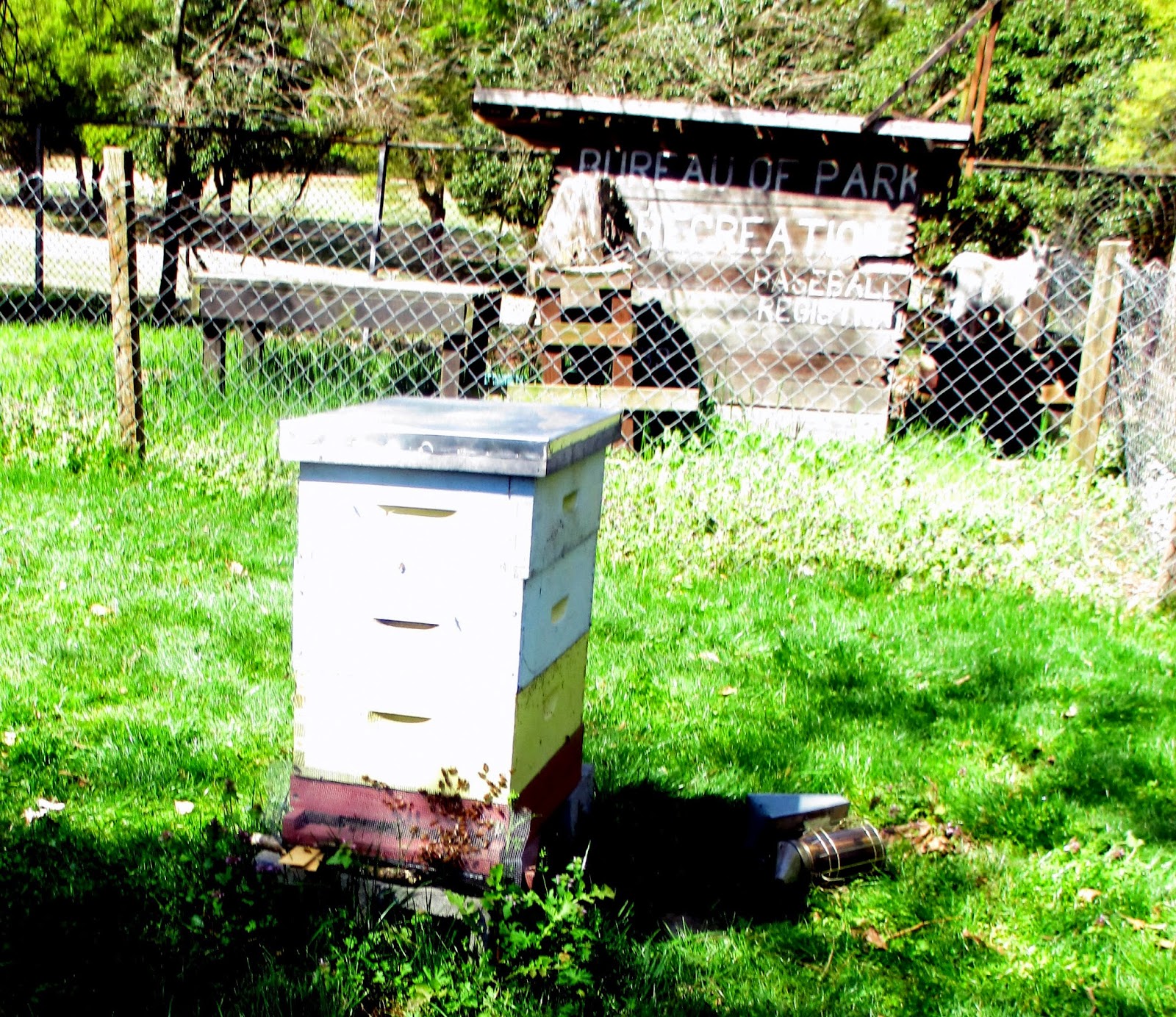 I also have two hives at my friend, Tom's house.  These were the Bill Owens hives that I got at auction in September, 2013.  These two hives were doing great as spring began.  Since they are in deep boxes and don't have medium supers, I was unable to spread out the brood nest when we added the first new boxes to these hives.  Both hives swarmed. 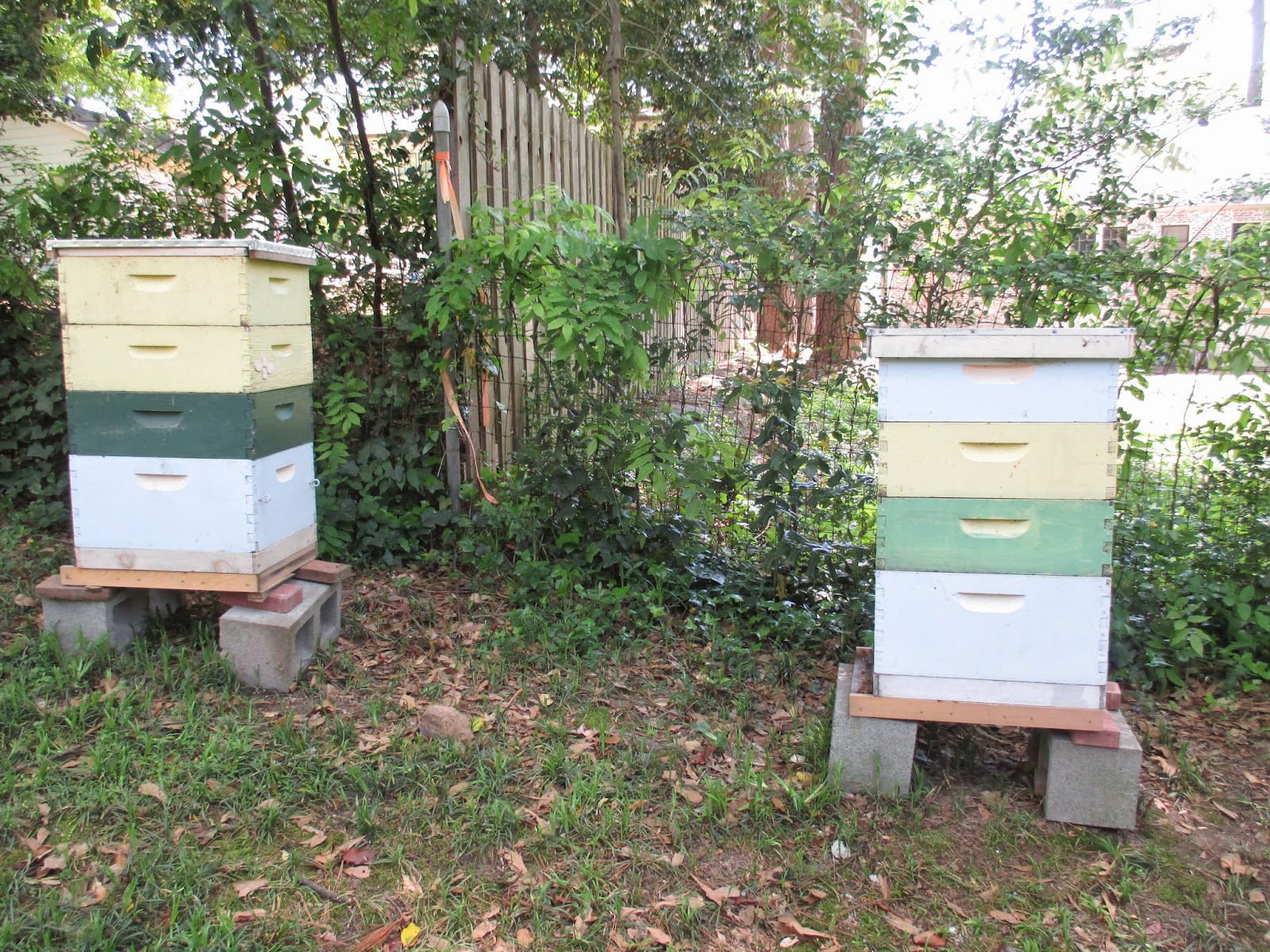 I captured both swarms which are now in my backyard.  The hives at Tom's are probably not going to produce much honey this year although both hives have two full boxes of honey on them.  They are struggling with post-swarm.  They swarmed on March 30 and April 9, respectively.

The front hive (March 30) apparently failed to get a good queen and is now queenless.  We have put in one frame of brood and eggs but on inspection on Monday, did not see any evidence of a queen cell.  The hive was quiet and has not developed a laying worker.  I will take another frame of brood and eggs over there to it tomorrow.  I wanted to today from the Chastian hive but they were not in any kind of shape to do that.

The back hive (swarmed April 9) has a queen who is up and running and has been laying but they are slow to rebuild.  These hives have had the same number of boxes on them for the last three weeks when many other hives are adding a box a week.

I have two hives at the Stonehurst Place Inn.  One of them overwintered and is doing well, making honey, expanding, etc.  I will check on them tomorrow as well.  I last checked them a week ago.  The second hive at Stonehurst is a nuc that I got rather late (4/27) from Ray Civitts.  They have now been installed three and a half weeks.  I don't expect honey with this late a start. 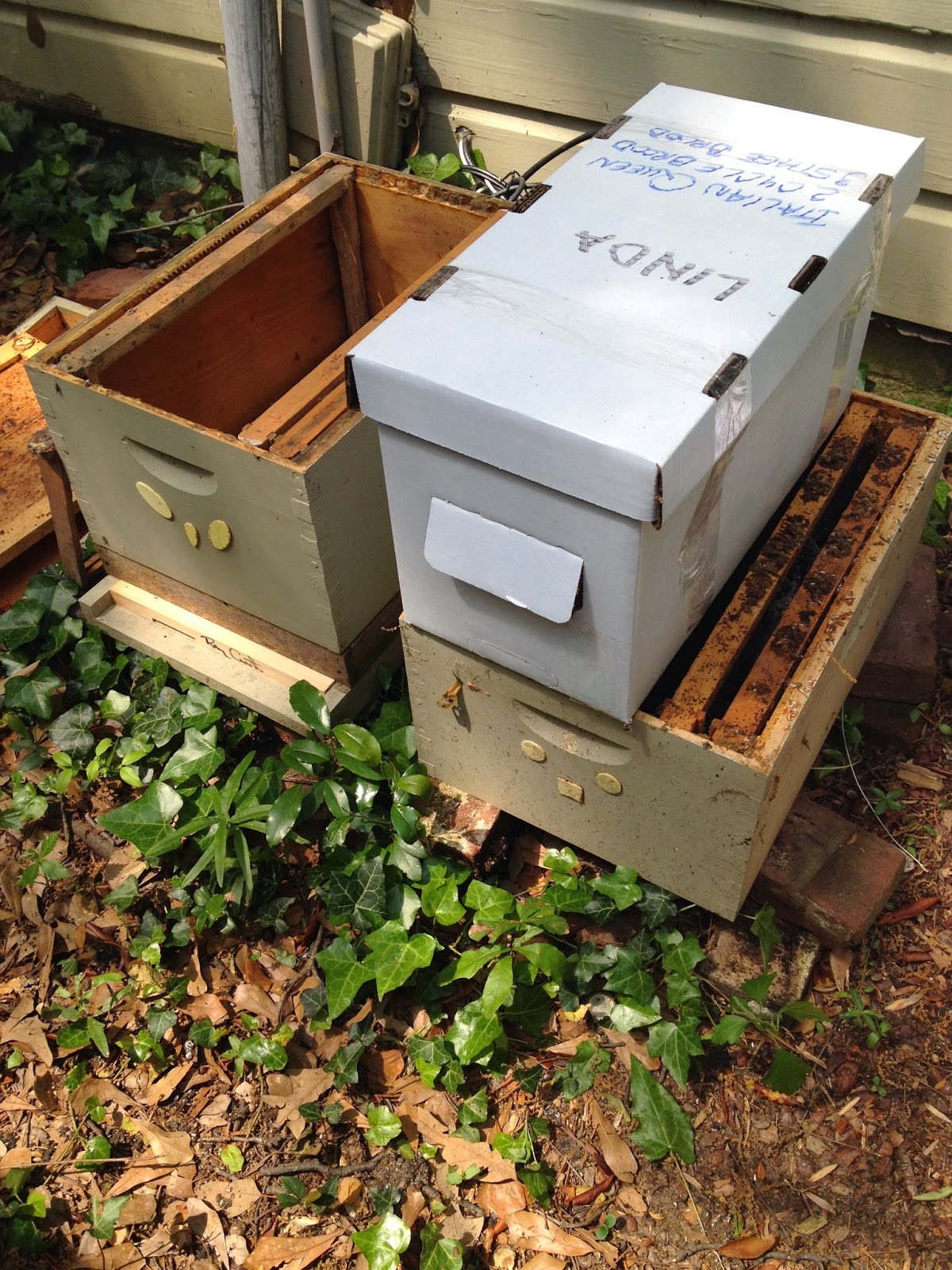 (For anyone keeping tabs, we are up to five)

I have two hives in Rabun County at my friends' farm.  Those hives were installed on April 26 and May 3 - again unlikely to get much honey with this late start, but the flora in the mountains is about three weeks behind Atlanta, so if the bears leave us alone, maybe we'll get something from these hives. 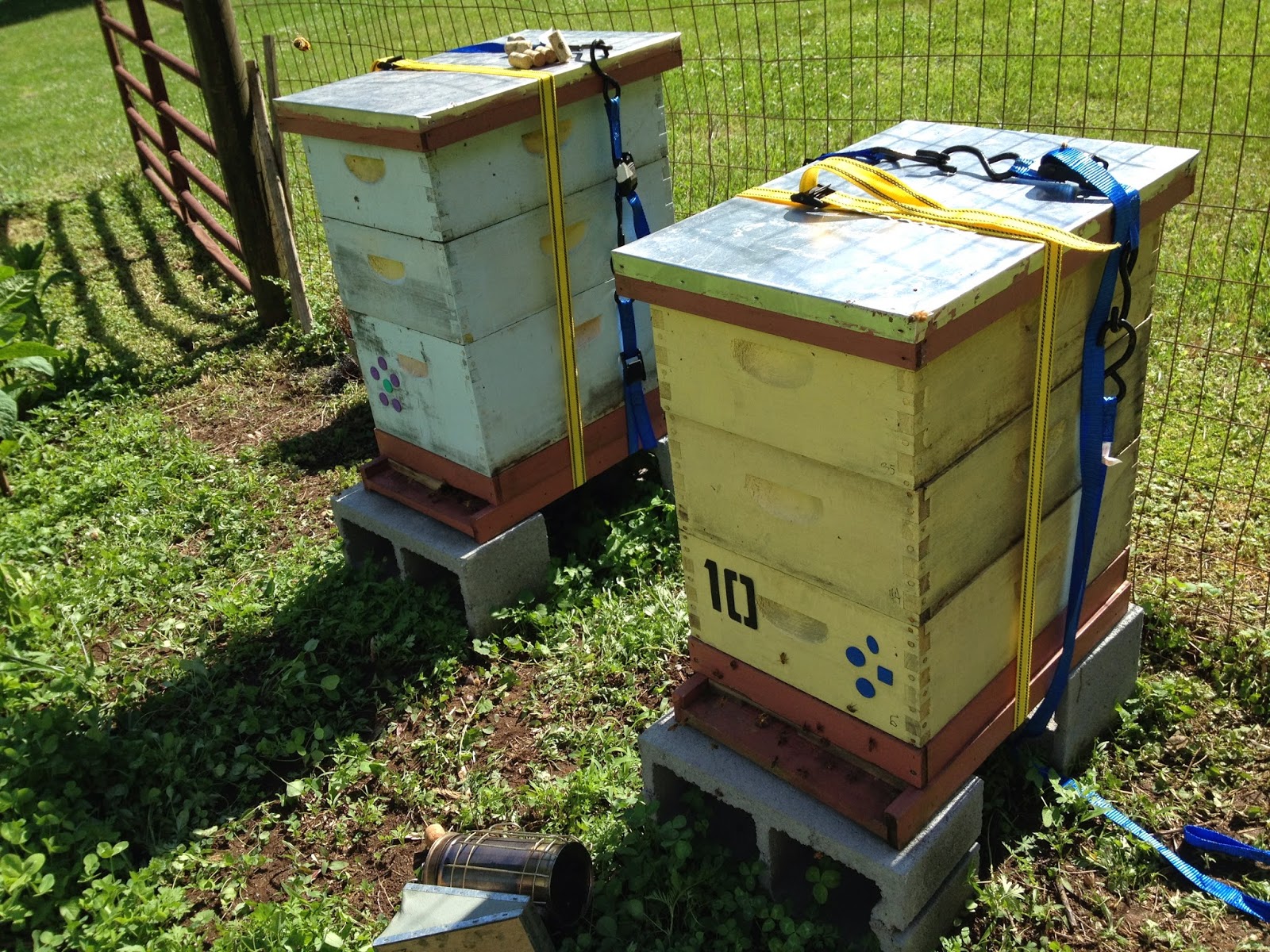 I was in the area this past weekend and stopped to add needed boxes to each hive.  The moving straps are to make us think we are keeping the bears at bay!  I think a determined bear might argue with both us and the bees.

In his backyard, Jeff has two hives that we got from Buster's Bees when I ordered them in December, thinking my hives would not make it through the winter.  We installed them on April 11.  He is mostly managing those but he and I keep bees together.  They now have new boxes on them - maybe two - I'm not certain. 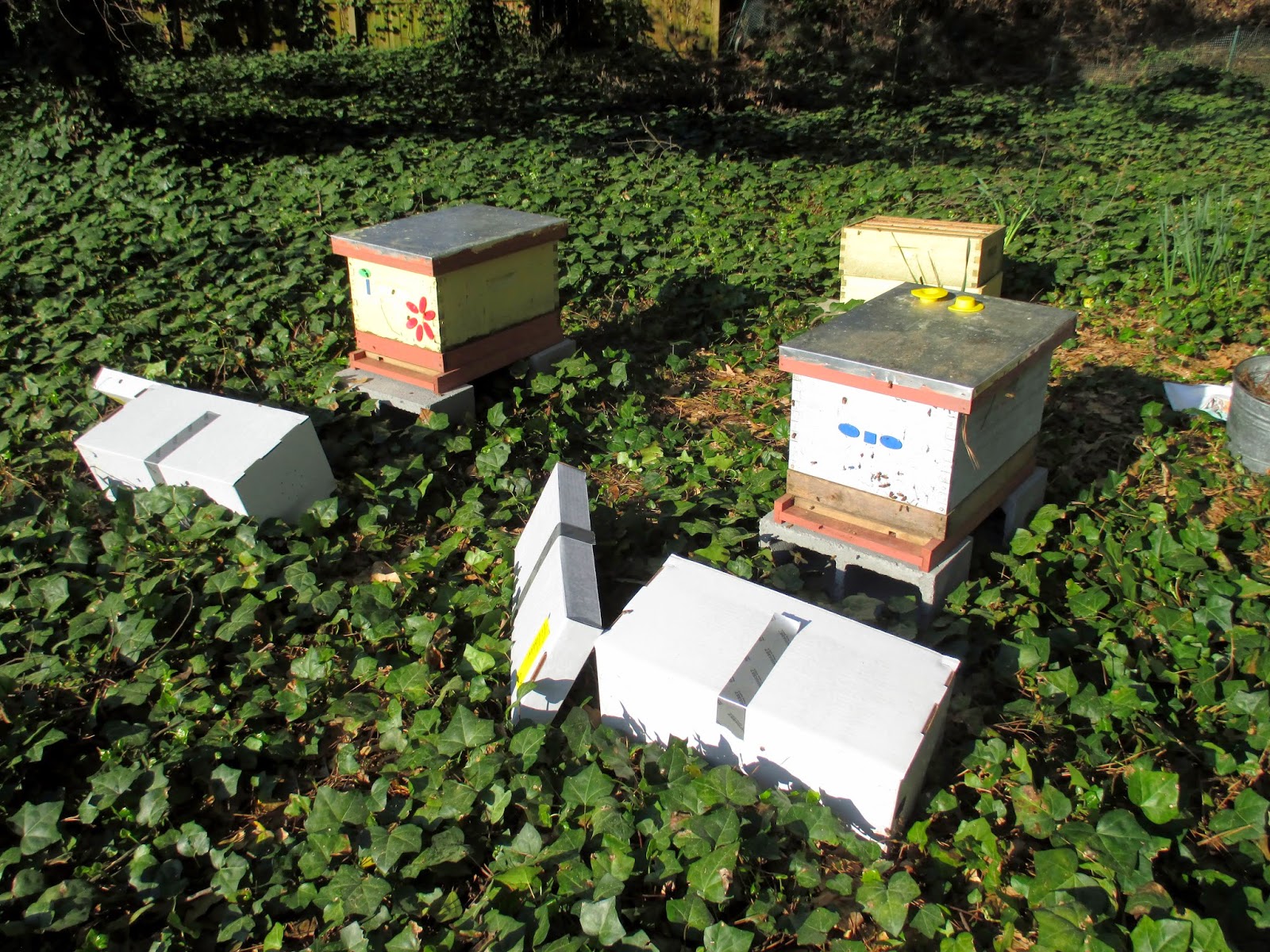 The other two hives from Buster are at the Morningside community garden and are rocking along.  I gave each of them a new box yesterday.  They were installed on April 26 and now each is composed of three boxes. 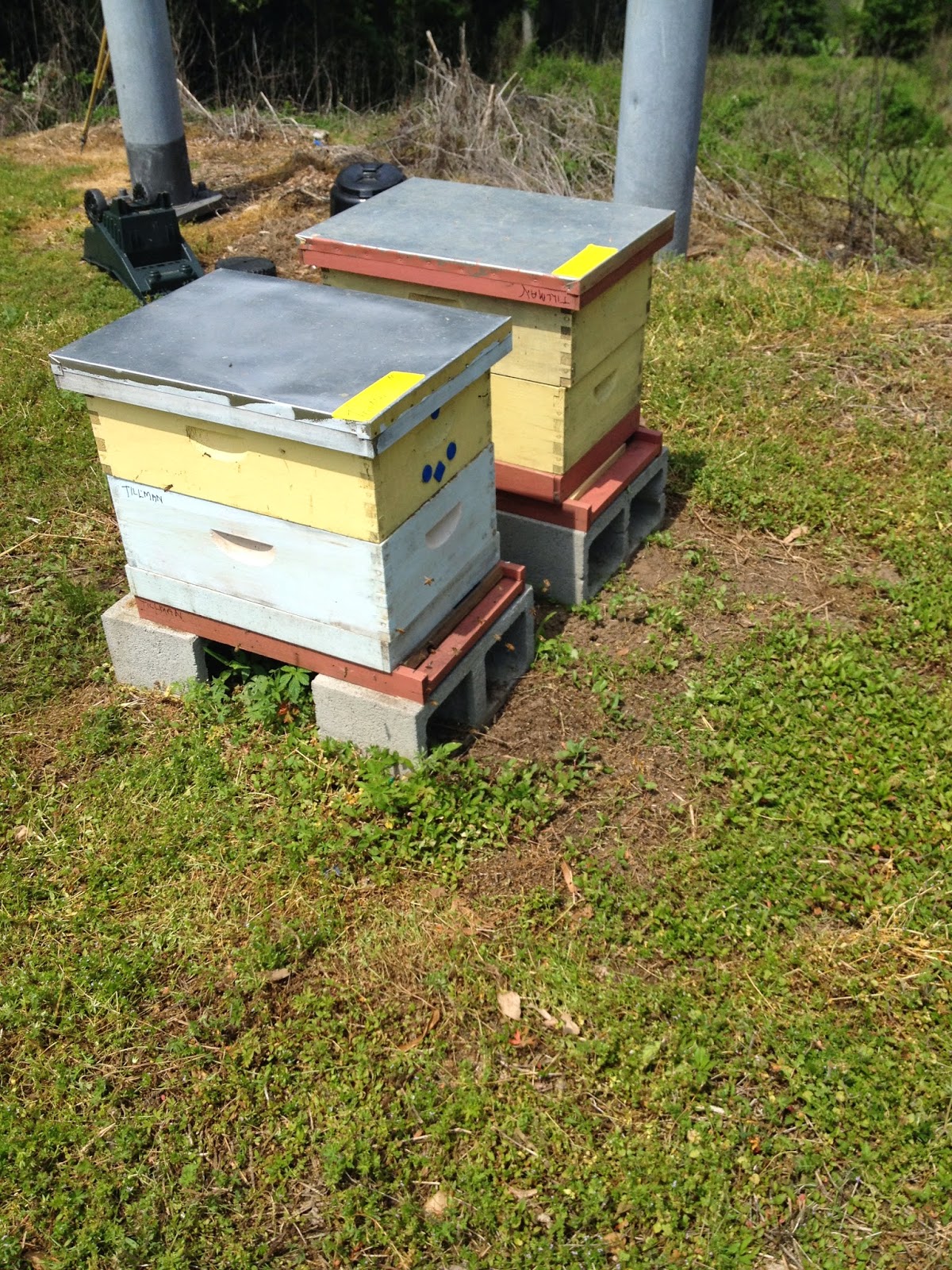 So I have 11 hives in other places.

In my own backyard, I have one hive that overwintered, the hive from Sebastian's yard that we moved at the end of March, the two swarm hives from Tom's house, a swarm I caught in my neighborhood just down the street from my house, a split in a three box nuc that I made from one of Tom's hives as a swarm prevention measure (didn't work, obviously), and a small hive of failure-to-thrive bees that I got from a beekeeper who thought they had swarmed.

It was a tiny swarm and is not doing well.  I got them on April 1 and they are still on just three frames in a nuc.  I don't want to combine them with another hive because they are from a beekeeper who treats his bees and I don't know what their problem is but they don't seem to be doing anything.  I think they were actually absconding to get away from the treatment.  I'm just going to leave them alone and they may die, but I'm not going to take any action.

So not counting the two nucs (Failure to Thrive and the Tom Split), I have five decent hives in my backyard.  If I eventually move the Tom Split into a full box, I'll count it but not for now.  So sixteen altogether.  Some will have honey for me this year.  Others will just build up hopefully to go through the winter.