I heard Tom Webster speak on Wednesday night at the local bee club meeting. Dr. Webster is at Kentucky State University and focuses his research on nosema. 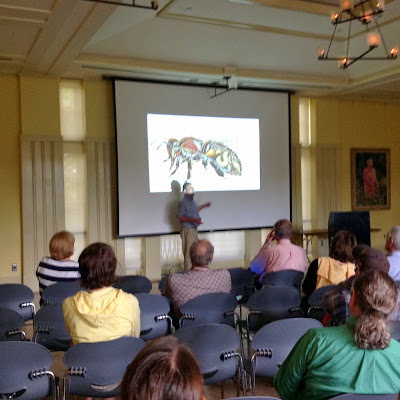 He had slides to show how nosema lives as a parasite in the bee's gut. The spore of nosema sends out a tube which finds purchase in the wall of the bee gut lining and embeds itself. Nosema really messes up the bee's digestion then and eventually, if nosema gets the best of her, she dies from lack of nutrition since her digestive system is compromised.

I had a hive which is one of my survivor hives who appeared to have nosema over the winter. When the bees went on cleansing flights, the hive was covered with brown streaks of bee feces. I was sure they would die since I was not treating with anything. But when spring came, the hive has survived and is making honey like crazy as we speak.

Dr. Webster said that without lab proof, there's not a sure diagnosis and sometimes bees get diarrhea for other reasons, but also the presence of diarrhea/nosema does not always mean the hive will die.

Essentially he said the best way to address nosema is to get rid of old wax. He didn't say keep old comb for five years like UGA is now saying. He said GET RID OF OLD WAX.

I raised my hand and said that I have been cutting out the old wax and then dipping the frames in boiling water for 1 minute. When the frame is pulled out of the stewpot, the thin layer of melted wax on the top of the water coats the frame as it comes out. I wanted to know if that wax would still contain microbes for nosema.

Interestingly Dr. Webster said that heat will kill microbes so the boiling water should do them in, while freezing frames would just suspend the microbe. Once removed from the freezer and returned to room temperature, the nosema microbe would be alive and happy.

Since we often recommend freezing cut comb and chunk honey to kill wax moth eggs which might be in the wax, I found that really interesting.

Cold will kill eggs of bugs but will not kill microbes.

When you make cut comb honey or chunk honey, you always freeze it so that your friend/customer doesn't open the jar or box to find wax moth larvae floating in their honey. Freezing the product kills the insect eggs. Obviously you can't heat either of these products or all the wax would be melted.