A Swarm by Invitation

When spring arrived, I had one hive alive at my friend Tom's house. The other, which had lived through the previous winter, had died. I had a lot of hope in those bees, had thought they were survivors and would outlast the attacks of varroa mite-vectored viruses, but that was not to be.

When I first went to check on the living hive, I took some swarm lure with me. The front hive was a sort of patched together split that I did last year. The bottom box was a deep. Four years ago I bought two hives from Bill Owens in the MABA auction. I picked them up in October. He required that they be in a deep hive box, so I complied and bought two deeps - one for each.

At home I mostly have mediums. I do have one or two hives on deep bottoms but mostly I like all mediums. So when that front hive died after its second winter, I wanted to fill it with a split from Bill Owens' daughter hives at my house. I brought medium frames of brood and eggs and a couple of empty deep frames (to accommodate the box) and made a split into the deep at Tom's house. Consequently now that hive has some really wonky frames in the bottom box. At least two of them are mediums with bottoms extended of wax and brood.

Side note: In most people's hives, if you put a medium frame in a deep box, the bees use the free space to build drone brood because they are desperate to find places to put drone brood when they are on foundation (designed for worker comb). But when bees have foundationless frames, they build drone comb wherever they want to. So in my hives, the extension below the medium frame is always used for the bees for worker brood, just extending the worker brood area in the medium wooden part of the frame.

Indeed at Tom's house, the front hive was thriving. He took these photos. So I took out the second frame from the box and it was a medium with comb below and I don't know how it happened, but I dropped it!

It was a complete mess. Lots of lost brood and bees and sticky honey everywhere. I was so embarrassed because Tom was filming as we worked!

Here is a beautiful bee he shot afterward as well as a crew of cleanup bees. 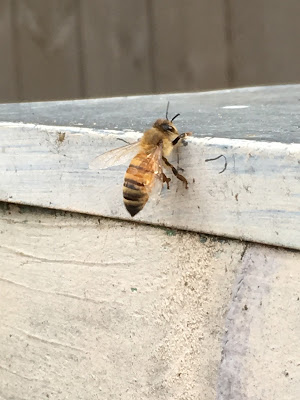 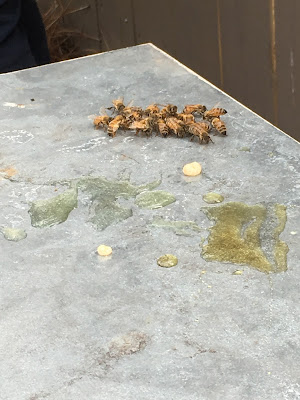 You can see larvae on the top as well as spilled honey.

So after that mess, I looked at the empty hive that had died and decided to set it up as a swarm lure hive. I put swarm lure under the entry and around the inner cover and lo and behold, bees had moved in by the time I returned about 12 days later.

It's nice to invite a swarm and have them take you up on the invitation!

Jeff and I checked those bees about a week after they moved in and there were queen cells as well as eggs and brood. We decided that maybe the swarm that moved in was with a virgin queen who hadn't mated well so they were superseding her.

We'll see what happens. They looked OK this week but I'm not sure there is a laying queen. There was capped brood but I didn't see young larvae or eggs. This may be while the new queen is mating. If there are no signs of a laying queen next week, then I'll add a frame of brood and eggs every week until they successfully have a laying queen.

To my disappointment, neither hive had the need for another super. My hives at home are growing exponentially and I expected these hives to be needing more room as well, but it was not the case.