Atlanta Bee Swarm - My First of the Season

I got a call to go to a house near Chastain Park to collect a swarm. The man who owned the house is a beekeeper and these were his bees. He understood that if we came to help him, he would be giving the bees away. I assured him that I would install them in the community garden near my house.

Bee swarms are always their own unique challenge. He had reported that these bees were 20 feet up in a tree but that he was fine going up a tall ladder. So I arrived to find the bees high up in the tree, as he had said: 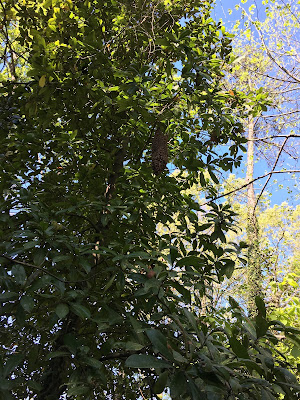 I spread my sheet twenty feet below, under the swarm. There was a deep, deep hole directly under the swarm and I kept forgetting about it and stepping into it as I walked on the sheet.

First Peter climbed his yellow ladder and jabbed the swarm with my swarm catcher on a pole. Many  bees fell into it. 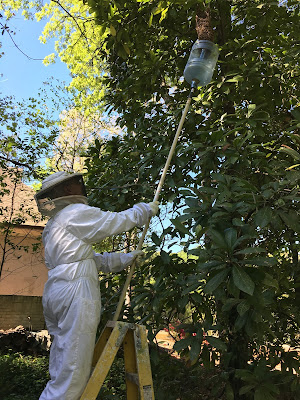 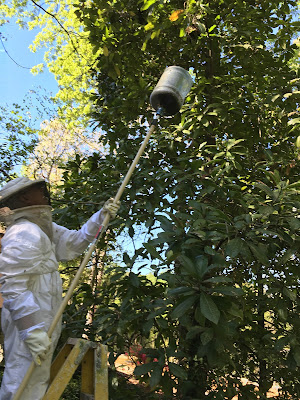 We dumped the bees into the box and covered them with the ventilated cover. It was clear that we hadn't gotten the queen because a huge ball of bees flew back to the branch and the bees in the box were not sending the nasonov signal. 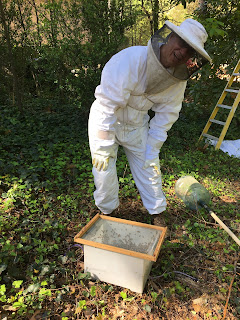 So now Peter gets his largest ladder and climbs even higher in the tree, preparing to cut the limb on which the bees are gathered. I am not thinking this through well. Peter cuts the limb and it falls onto the sheet - bad plan - I should have been on the other ladder with the swarm catcher. Still no queen or at least the bees are not indicating that she is in the box. 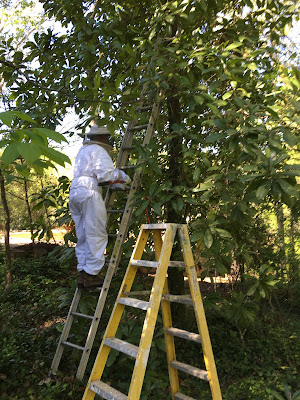 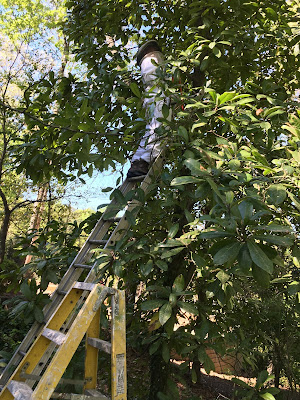 So we tried one more time (and there's not a photo because this time I held the swarm catcher right under the branch as he cut it.) 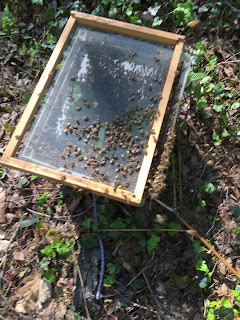 This time we got the queen and the bees are signalling. All seems well with the world of this swarm.

There were still many bees on the sheet (from the falling branch), so I wrapped the box which also had a lot of bees on the outside in the sheet; put the whole contraption in my car and took the swarm off to their new home.

I put all of the photos on Google + (they are doing away with Picasa where all my photo albums and slideshows are).