My second swarm call of the year came just a couple of days after the first one. I was told the bees were on rebar at a construction company. When I arrived I found the bees tucked into the squared corners of an I-Beam! 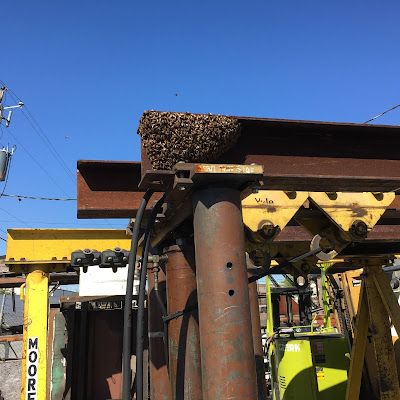 So I did the swarm catching prep while I decided how to get these bees that I couldn't shake and didn't want to make angry.
I set up a sheet under the swarm, got my ladder, my plastic banker's box, a spray bottle of sugar water, and my bee brush. I climbed up the ladder. 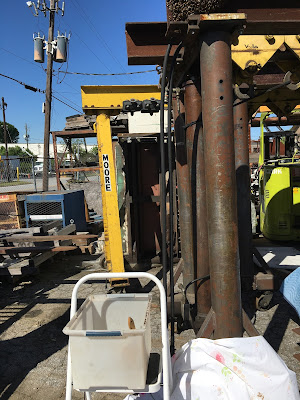 I held the box and brushed the majority of bees into it, but huge numbers flew back to the I-Beam. The bees in the box were not tail-up and were not sending out nasonov. The queen must still be on the I-Beam..... 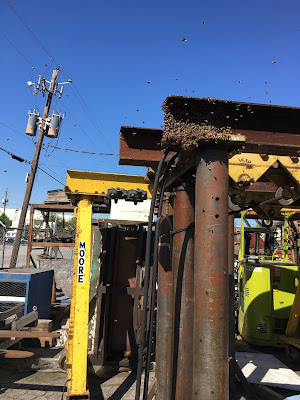 I felt discouraged after several brushing attempts and angry bees in response. So I took a round Ziploc 16 oz container and scraped the bees into it by running it along the interior of the I-Beam. Then I dumped them into the box and repeated, dumped, repeated, etc. 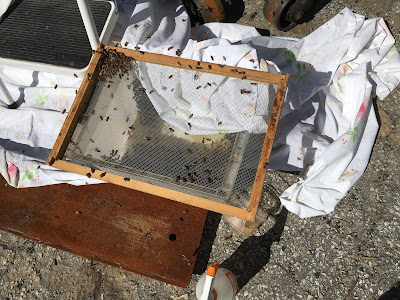 I decided to leave them for lunch and see if the queen was in the box after lunch. Forest Park is 30 minutes from my house so I drove back the 30 minutes, had lunch with Julia, and returned to the scene. 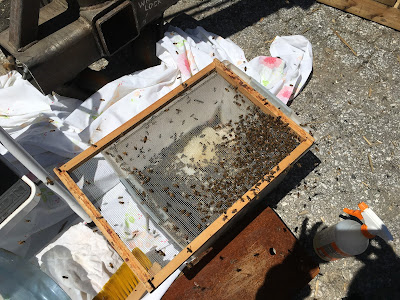 The bees were in the box and had left the I-Beam. I must have gotten the queen in one of my Ziploc container sweeps. 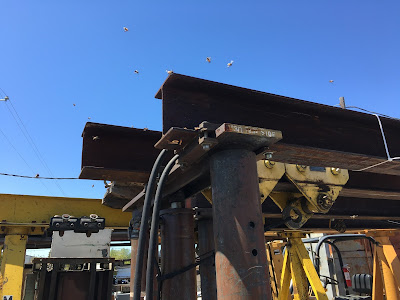 Because there were lots of bees outside the box on top of the ventilated cover, I decided to bring them home just like that. I secured the cover with the bungee cord and then gently wrapped the box, exterior bees and all, in the sheet. I carried it to the car and set them in the back. Now I'm driving with hundreds of bees outside the travel container! 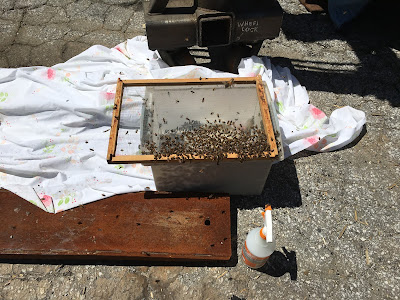 I installed this swarm at Stonehurst Place Inn on Piedmont. Their bees died over the winter and they were glad to see me. I hope they will do well in the hive at the bed and breakfast.