I've gotten four swarms this year. The first was up high in a tree in Buckhead. The second was in an I-Beam down south of Atlanta past the airport in Forest Park. The third was in a holly bush in Buckhead. I also got a fourth swarm which just found and moved into an empty hive at Tom's house.

When I captured the third swarm, I immediately housed it in an eight frame box at the community garden in my neighborhood.

The first swarm was given to me by the caller even though they were his own bees from his own beeyard. I housed them at my house in a nucleus hive for a little while to get them good and started, but I had promised that they would go to the community garden. So about two weeks after I got them, I moved them, still in the nucleus hive to the garden. The greenery on the front is to help the bees know that they need to orient to the new location. 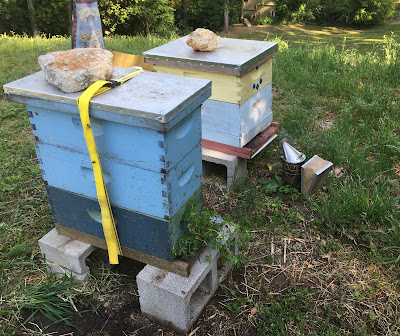 Since they were in a nuc, I kept the moving strap around them. We've had vandals at the community garden who are fond of opening the top of the hive and leaving it like that - terrible for the bees. It's fun to keep bees in a nuc - like a tree. We also keep stones on the tops of those hives - not like we have wind, we don't, but rather to let the vandals know that removing the top is not suggested.

I checked on that hive yesterday as well as the holly bush hive. The nuc hive was boiling over with bees. The holly bush hive also was almost ready for a new box, so since I was there and had the box, I went ahead and added it.

Here's what the nuc hive looked like when I got there: 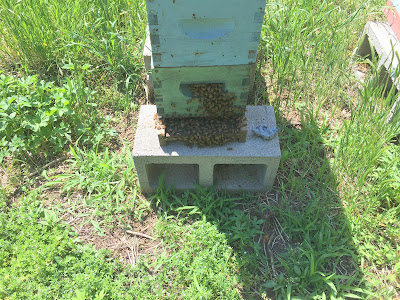 At this time of year, unless I have reason to worry about a hive, I mostly am opening the box to see if they have used up their storage space and need more room. The nuc hive was bursting at the seams. The minute I put the new box on, the beard disappeared and the bees were happy. 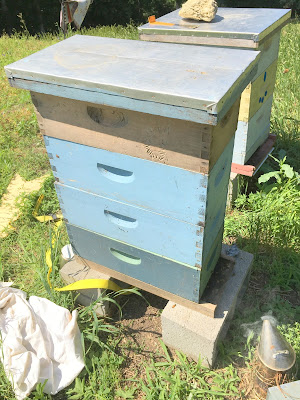 The difference in the entry is remarkable.

So the last two stories are not happy fairy tales. After all the work to get the I-Beam swarm - two trips to Forest Park, a whole day's worth of time removing them and installing them at the Inn, I went to the inn to check on them and they had vanished. They did not like their quarters and had left. Discouraging. I will need to make a split to give the inn because currently they have no bees.

And the swarm that accepted my invitation and moved into Tom's empty hive appears queenless. When we first inspected that hive after Tom informed us about the swarm, there was a laying queen but the hive had also made queen cells. Sometimes swarms do that - move with the old queen and then fairly quickly get rid of her and make a new queen. Or she may have mated badly. So the next time I inspected there was no pollen coming into the hive and no sure signs of a laying queen.

Tomorrow I'm taking them a frame of brood and eggs from one of my five backyard hives. I'll do that for a week until I know they have a good queen in the hive, or until they succeed in making one. I'm hoping I get over there tomorrow and find that they, in fact, have an obvious laying queen.

Atlanta is a big city. My hives in my backyard in Virginia Highlands are doing quite well - making lots of honey and thriving. Julia's backyard hives in the northern part of town are not making much honey - at least not as much as last year. It may simply be the difference in location. Also she has lots of construction and forest DEstruction going on behind her house.

But Tom's hives are also located in her part of town and neither hive needed a new box at my last visit.