Installing a Package at Stonehurst

On Tuesday, I got an email from Stonehurst that our bees were ready for pickup at Mountain Sweet Honey in Toccoa, GA. I called Mountain Sweet and they said the bees needed to be picked up right away, so I drove up early Wednesday morning to pick up the two packages. Luckily I had the time and it was a pretty day for a drive. Also, the section of Atlanta I-85 which is one mile from my house had not collapsed and caught fire yet! That happened the next day.

So our bees at Stonehurst died during the winter of 2015. In 2016, a swarm moved into one of the hives and they chugged along but didn't make it through the winter. The owner really wanted bees there again, so she ordered a package of Italians and a package of Carniolans for this spring.

I haven't shown photos of a package installation in a while, so thought I'd share these.

I drove the bees back in the back of my car so when we got back to Atlanta one and a half hours later, they couldn't wait to be put in a hive. I stopped by my house and got two rapid feeders (because you have to feed packages). Packages of bees consist of bees who didn't know that they were leaving home when they woke up on the morning they were poured into a package. If they were swarming bees, they would have filled their bellies with honey in preparation for the swarm.

A package is an artificial swarm in a sense in that the bees have no comb or established brood. Instead they are a bunch of bees with a queen who isn't their mother. They have to draw wax and get started the minute they are installed but without honey in their honey stomachs, they have no resources to make wax. Thus, the beekeeper MUST feed a package.

So I picked up two rapid feeders, mixed up some bee tea, grabbed a squirt bottle of sugar syrup from my swarm kit, and got a couple of empty boxes to use as a funnel to pour the bees into the hive.

I set the packages on the ground while I worked on the hives. I squirted both boxes with sugar syrup on both sides to calm them and give them something to do. 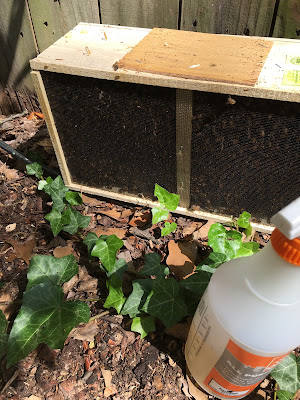 I wasn't planning to do this on Wednesday, so I had to clean out both hives before installing the bees. This meant pulling off the boxes all the way to the ground to clean out the dead roaches, wax that had been consumed by wax moths and other detritus in the hive. I had brought clean new frames. I set each hive up with two medium boxes. Then I planned to leave the rapid feeder inside an empty medium box above the inner cover.

The queen cage was wedged between two frames (pretty easy to do in an 8 frame box). Then I put the "funnel" empty box above the two hive boxes and shook in the bees. Usually I bang the package on the ground to loosen the bees' grip so that it is easier to pour them into the hive. 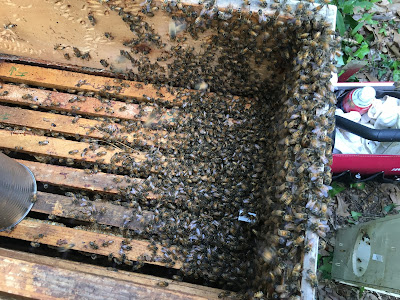 I brushed the bees on the top edge into the box and put the top on to allow them to calm down while I installed the second package. I then returned to the hive and using my bee brush, got them down off of the funnel box. I then slid the inner cover on and put on the rapid feeder. I filled it with bee tea, put on the telescoping cover and left the bees to adjust to their new surroundings.

All of the bees never leave the package so I set the package up facing the hive so the remaining bees could go inside at their leisure. 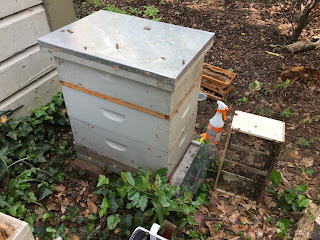 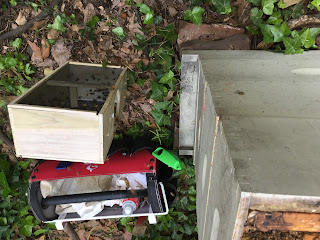 I edited the above photo to rotate it, but in my new computer without Picasa, I can't get it to save my edit. Sorry you have to twist your head around, but I wanted you to see that the opening of the package faces the opening of the hive.

I went back on Friday and gave them more food and plan to go again on Sunday. But the tulip poplar started blooming today so our nectar flow has begun and I'll not feed them for much longer.