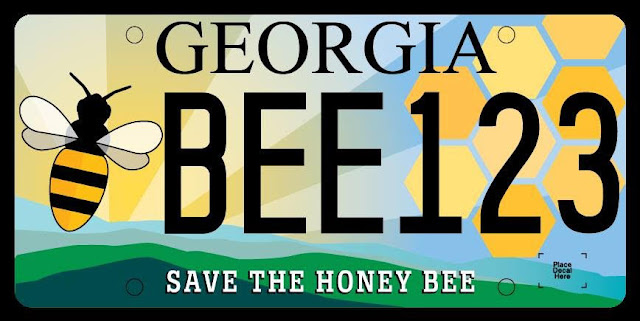 This gorgeous license plate is moving through the Georgia legislature for passage this year. It passed the House unanimously 168 - 0. Today the bill is in the Georgia Senate committee process. It just passed unanimously through the public safety committee and now goes to be voted on in the Senate, I believe.

We had a contest for the design of the plate. The judges had no idea who had designed the entries which were designated by random numbers (did you know you can get sets of random numbers by Googling?)

The judges had the final entries printed up to actual size and held them up to license plates of cars so their visibility could be determined. It was a great system because I have frequently had the experience of trying to decide what the car in front of me was representing in their specialty license plate because it was hard to see.

This one is easily read; the honey bee, while stylized, is as accurate as possible; and the colors are striking. My dear friend, Julia Mahood, often mentioned on this blog, was the winning designer!

We won't know the details of ordering the plate until it has passed the Senate, but if you are a Georgia resident and are interested in knowing when/how to order, you can put yourself on a list to be notified when we do have the instructions for doing so. Just click here.

UPDATE: On Wednesday, March 21, as spring and bee season begin, the Georgia Senate passed the honey bee license plate 51 - 0. Now it goes to the Governor's office for his signature.