Toll the Bells - One Hive Dead

Today the bees were flying and happy in Mellona and Aristaeus2. In each of these hives the sugar syrup I put in at the last warm moment about three weeks ago is all eaten. Bermuda, my oldest hive, was a different story. None of their sugar syrup had been touched. The top box was full of stores but the hive is dead and gone.

Scattered through the hive boxes (3 mediums) were dead bees lying on the tops of frames. There were also dead hive beetles throughout the hive and no evidence of hive beetle damage. 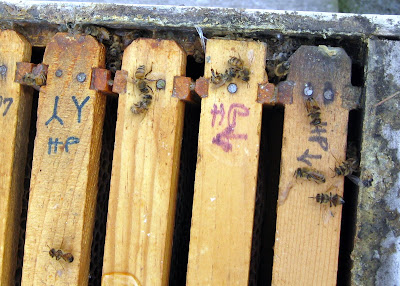 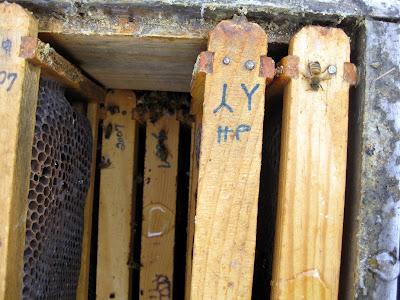 I found one tiny indication of starvation on two frames in the second box. A small cluster of bees were head down in a few cells back to back on two frames. These bees obviously starved while the frame next to theirs was totally full of liquid sugar syrup. This sometimes happens with a sudden cold snap when the bees make a bad decision about where to locate the cluster. 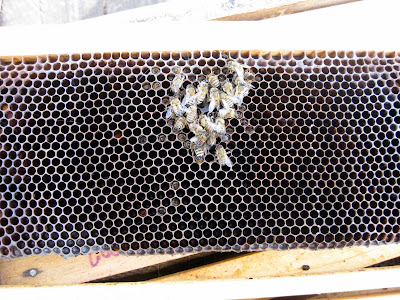 Keith Delaplane talked at our bee meeting in February about hive decline and said that across the country, beekeepers tend to lose 30% of their hives from year to year. Well, sadly, here's my 33% to add to the average. This was my first beehive and had made it through the previous winters, including its first winter when at the end of the winter most the bees in this hive had DWV or k-wing.

Because there were dead bees scattered throughout the hive, I wonder if this hive were weak and lost its queen during the winter or going into winter. Then the hive got robbed out because that's the way the bees scattered, dead throughout the hive look: like bees killed in the process of robbing. So when I put sugar syrup in the hive at the end of January on a 50ish day, they either were already a goner hive or they didn't have the resources to use the sugar syrup. The last little cluster died of starvation, with good stores beside and above them.

I am sad to lose them, but I still have two great hives. Mellona is three years old and Aristaeus2 is a two year old swarm hive from a swarm I got in 2008. And I am building a top bar hive this weekend to be optimistic about swarms coming my way in 2010.