This is turning out to be a discouraging bee year.
I transferred the L Hive to a new home, cleaner and in better shape than the one in which they were housed.

I am glad I transferred the L Hive, even in its no-brood state. In the original box, the screened bottom board was closed up with an old sticky board and in the space between the screen and the board lived an ant colony of large winged ants. No air was coming into the hive, thus the immense beards that I have been seeing. 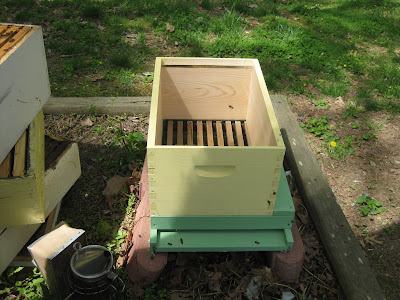 I gave this hive a screened bottom board that is wide open; I put on a slatted rack; and I moved them into 8 frame boxes. 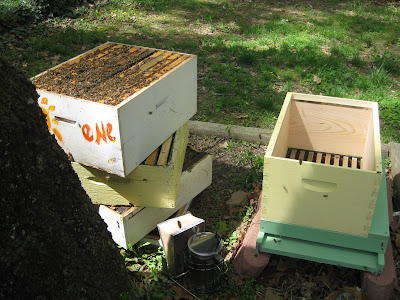 I also looked at every frame because since I was downsizing them to 8 frames, I had to choose to leave out two frames from each box. I of course shook and brushed all bees off of each of the rejected frames.  There was no evidence of a living queen. 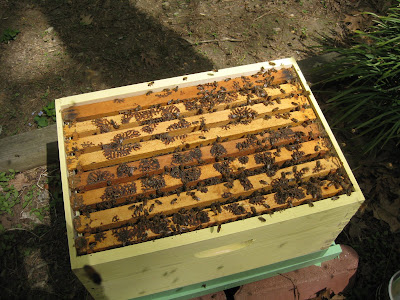 So here it sits in its new digs, in all its queenless glory, soon to die out if I don't find a solution to the problem. 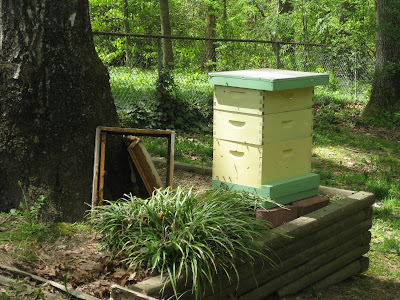 OK, so I tried to think positively about this hive and all its problems.

The obvious solution would be to add a frame of brood from another hive and allow the L Hive to make a new queen. But I currently don't have good resources to do that.  Mellona, my one ongoing hive, has only two frames of brood and eggs in it at the moment - the brood is about the size of a coffee saucer and while I did see eggs yesterday, I can't take one of only two frames of brood out of that hive. I took a similar frame out of that hive last week for Aristaeus2.

I haven't inspected the swarm that moved into Bermuda. They've been there just a week at this point. I added a super to them yesterday but didn't explore for brood. I could go deeper into that hive and steal brood from them. I'm a little burned from the swarm leaving the top bar hive and don't want to make these bees want to go away.

I also could inspect the hive at Blue Heron. Yesterday I only added a box to them and didn't go into the brood box. Perhaps I could get some brood from them and see if they have swarm cells at the same time, since Jennifer emailed this moring that I would probably find that. I am also cautious about doing that because I have to open up that hive on Tuesday for a boy scout troop and don't want to disturb them every two seconds.

On Friday, I called and emailed a N Georgia beekeeper in Ball Ground, whom I understand is the only person still selling packages, to see if I could buy two packages from him to fill my top bar hive and the hive I am supposed to install in Rabun County. I've now heard back from him that he doesn't have bees available any more and no possible queens until after April 20.

As I reread this sad post, I think today that I will inspect the brood box of the swarm hive and if I can, I'll take a frame of brood and eggs from it to add to the L Hive.  I'll not disturb the Jennifer hive at Blue Heron until I open it on Tuesday, but if I find swarm cells or a brood frame to spare, I'll take it and move it to either L or Aristaeus2. I'm on the swarm call list for Metro along with tons of other people, but maybe I'll get a swarm call for the top bar hive.  Sometimes I get a call from someone in Atlanta because they find this blog and call me......however,

Email ThisBlogThis!Share to TwitterShare to FacebookShare to Pinterest
at 8:19 AM
Labels: adding frame to queenless hive, balling the queen, slatted rack


Blog Visitors from All Over the World