News of the Bee Tree

Back in August, I was lucky to be a part of a rescue of a bee tree by Atlanta's Odd Job Tree Removal company. Later a second bee tree was sectioned and put next to the first one. I put hive boxes on top of both tree sections. Then I fed the bees in both trees heavily during the fall and then crossed my fingers that they would make it through the winter.

I went to visit the trees at the end of February. In the first big tree section, the hive had obviously died. There were dead bees lying near the entrance as you can see in the picture below. 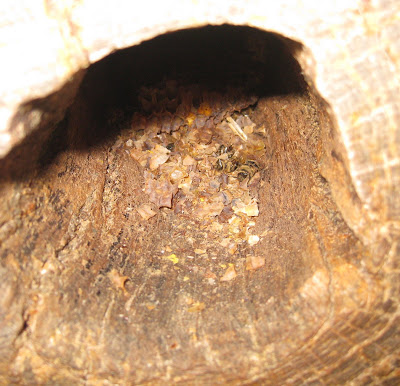 I stuck my camera in the hole and took a picture of the interior. Here's how it looked: Some shards of comb and dead bees lining the floor of the opening. 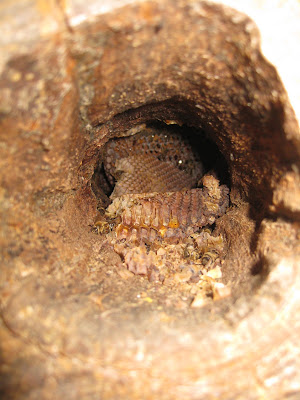 I'm short of 8 frame medium boxes so I decided on Thursday to go over to retrieve my equipment from the dead bee tree. Amazingly, it was teeming with bees. I watched as obvious bee residents flew in and out of the opening. I went in to speak to Annette in the tree company office. She said that on Wednesday suddenly there had been a lot of activity. Then today she noticed that the bees were living in the tree.

I guess a swarm moved into the tree on Wednesday and is happily occupying this space! 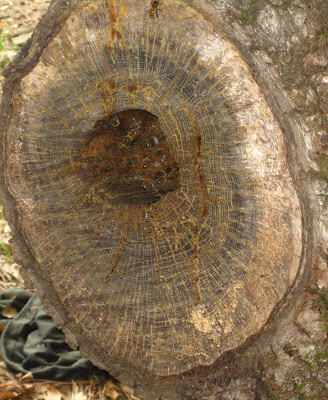 The second bee tree, which did make it through the winter, also is full of bees. Here they are hanging out of the hive opening. I didn't open the hive box on top of the second section, but tried to lift it. The bottom box is obviously filled with honey.

I'm considering what to do at this point. The bees in this tree have begun using the hive box which is a good sign. What I think I'll do is reverse the boxes and put the empty box over the hive opening at the top of the section. Then I'll put the honey-filled box over that. Perhaps the bees will then begin to use the comb in the now-empty box and we'll get them to move in to the wooden box as a choice of theirs.

I'll let you know what I discover when I go over and inspect the hive box on top of this tree section. 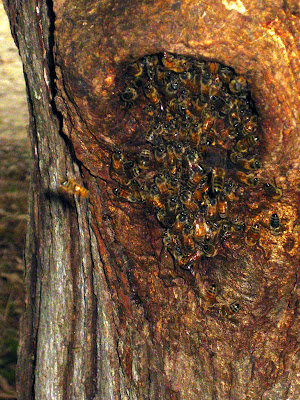