Today I had an opportunity to check on the L hive which was queenless on April 11. That afternoon I added a frame of brood and eggs from my friend Julia's strongest hive. I hoped that this would help them make a replacement queen.

Today I looked at all the frames and there is no sign of a laying queen. If they had made a queen from one of the eggs from Julia, they should have a queen within 14 - 16 days. She would need about five days to get her act together, orient to the hive, and then it would be time for her mating flight. So she could be potentially mating as we speak or they could have not been successful.

The hive wasn't angry, but they had no eggs and brood. 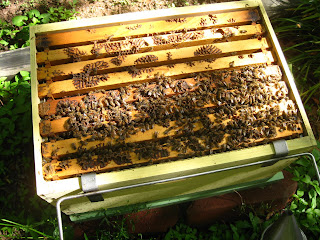 In these two pictures are both sides of the frame of brood and eggs that I put in the hive on the 11th. You can see opened queen cells - two on the first side of the frame. 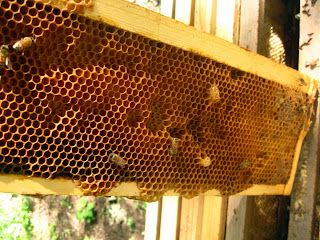 And three more on the second side of the frame. That they are all opened, some in the above picture, with the sides ripped out, might indicate that one of the queen cells was a success. They certainly tried with that many emergency cells, although it's typical for them to try to make about 6 cells in these cases. 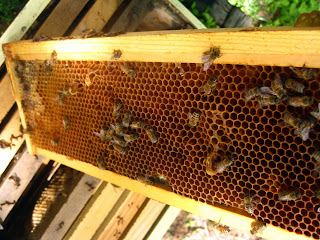 This would argue that they had successfully made a new queen but again there was no brood in the hive. That queen should have been laying about a week but her mating flight may have been delayed by the stormy weather over the weekend. 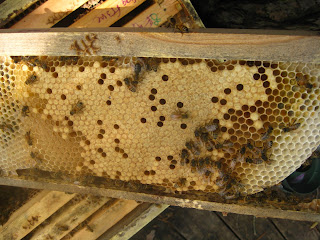 We are in the middle of the nectar flow and I can't stand it not to have these two hives doing well. As a matter of fact, my only at-home hive that is doing well is the swarm that showed up and moved in on Easter.

So I called this man who raises queens. I see him every Saturday at the Peachtree Road Farmer's Market He is bringing me two queens to buy on Saturday. I don't know what I'll do with them if these two hives take off over this week!

Meanwhile, I know help is on the way on Saturday. At worst I'll make a small split into my medium nuc and let any unneeded queen have a home there.
Email ThisBlogThis!Share to TwitterShare to FacebookShare to Pinterest
at 7:02 AM
Labels: adding frame to queenless hive, queenless