I visited the Rabun Gap Community Garden bees for the first time today since I set up the hive a week ago. I had left a full baggie of sugar syrup on the hive and only about 1/4 of it was still untouched by the bees. Giving them this sugar syrup gives them a head start on wax building as they learn the area for foraging. It is the Georgia nectar flow right now, though, so I didn't replenish the bag. I did leave it on the hive, however.

The bees in the picture below are gathered around a slit in the baggie to slurp up the syrup. 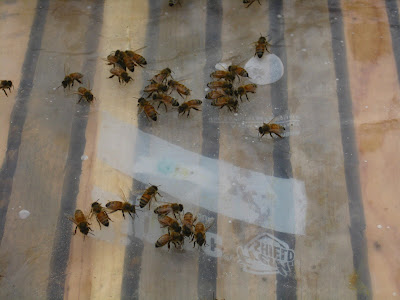 I moved the baggie so I could look at the frames. I saw the queen cage and pulled it up to make sure Her Majesty had been released. The bees had eaten through the candy plug and had freed the queen! 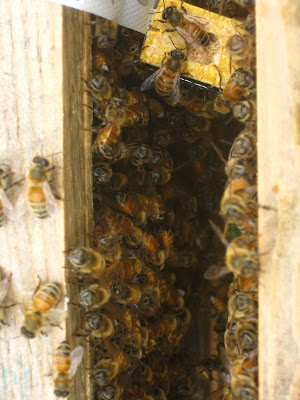 Not a great picture, but here is the empty queen cage. 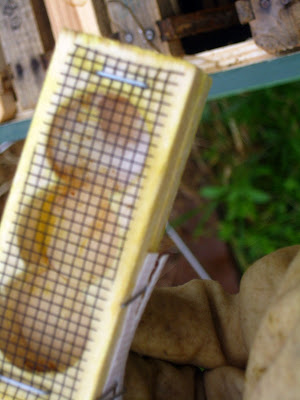 Then I looked at the frames to see how they were building wax. This was one of the early frames I pulled up. Isn't the new wax beautiful? There are eggs visible in this picture. Double click on it to enlarge it and you will be able to see them. 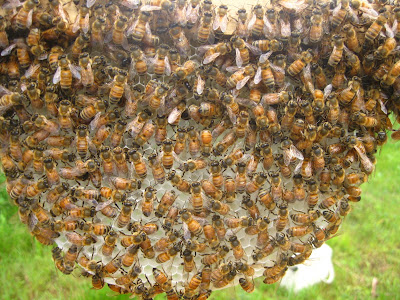 In case you can't find them on your own, I've circled three obvious eggs in the photo below.  Again, double click to enlarge it so you can see the eggs.  Isn't it fascinating that the queen has already started laying even though the frame is not fully filled out.  She's anxious, since the nectar flow has started, to build up her colony. 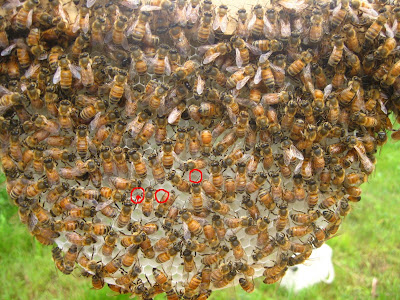 In the picture below you can see the bees hanging onto each other (festooning) as they create new wax in this frame: 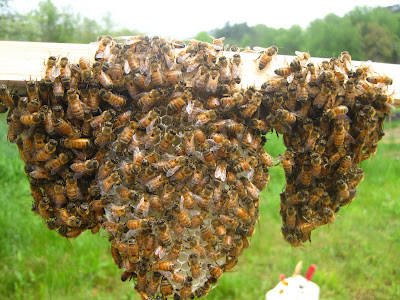 I had one frame of old, dark comb in this box and they are storing honey/nectar in it: 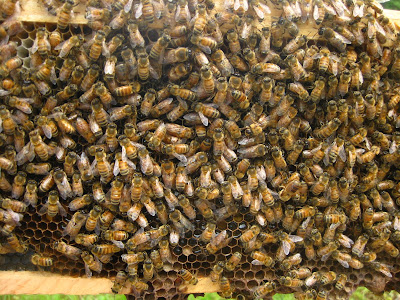 These bees had built all on one side of the hive, so I moved the six frames they were using into the center of the box and put two empty frames on the outside edges of the box.  Also, I won't be able to check on the hive before Sunday the 16th, so I went ahead and added a box to the hive. 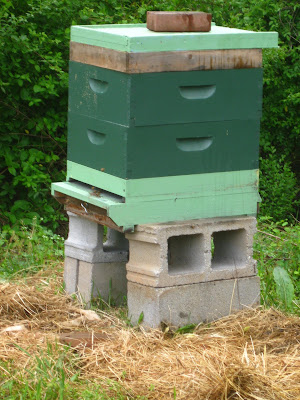 I left the shim around the baggie feeder (I'll remove that the next time I am there) and replaced the brick on the top.  These bees seem to have started well, so I am very pleased.