Today marks one week from the disastrous absconding top bar event. If you'll remember I scooped the bees up from the ground and then made some changes to the top bar hive. I covered the screened bottom with a board the length of the hive, I tied some old comb onto some of the top bars, and I made sure all of the available top bars closest to the bees had some melted wax on them.

Then I re-installed the bees, put a queen excluder over the entry and crossed my fingers.

When I arrived at Valerie and Jeff's house, the bees were flying in and out at the small hole at the front end of the hive. I haven't built a holder for top bars to use when inspecting them like a frame rack on a Langstroth hive, so I improvised by setting up the two empty packages I had in my car as a frame rest. 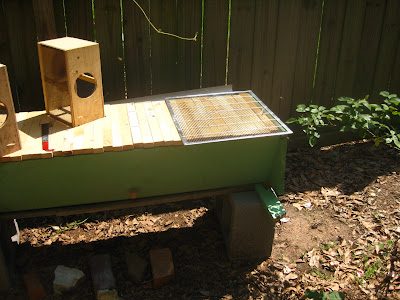 The bees appeared to be happily building comb. In all of the small beginnings on the seven top bars where they were building comb, there were eggs in the newest wax on the top bar. I didn't, sad to say, get a good picture of eggs on this trip. The sun was in the wrong place and I did well to prop the bar on the packages - didn't want to risk making another mess. 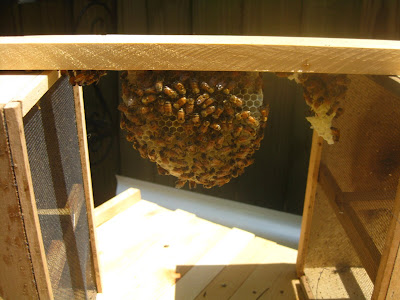 I did very little disturbing of the hive. I only looked at the six or seven bars at the end where they appear to be building comb. They were doing a little cross comb on the side of the hive where I was standing. I decided to let it alone this week. I know it can get out of control in a hurry, but if I interfere and they leave again, I just couldn't take it, so I am taking the risk. 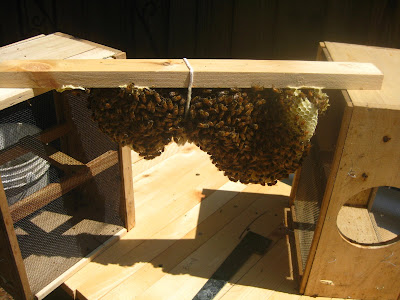 The bees did look happy.  To interfere as little as possible and to help them feel at home, I didn't cut the cross comb and I did leave the queen excluder over the top bars where they are living.

Interestingly in studying for the test at Young Harris, I was taking a practice quiz and one of the questions was when in a nectar flow will bees in a hive not build comb.  The answer:  when the hive is too bright and/or when the hive is queenless.  I've solved the "bright" problem by closing up the screened bottom and we obviously have a laying queen so they are now off and running. 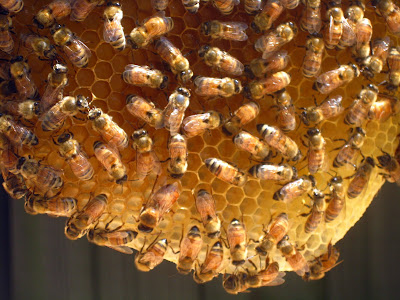 It's easy to inspect a top bar hive and less intrusive than inspecting a Langstroth. I lit my smoker but then didn't use it. I did discover a difficulty that I hadn't anticipated. In the Langstroth hive, the frames have bee space between them so sliding frames against each other doesn't involve the death of bees. I realized in sliding the top bars, that I had to watch carefully to make sure no bee was between the bars and thus in line for certain death. I guess I could have used my smoker or blown on the bees, but I just observed this time.

Like in a Langstroth inspection, I removed one frame - about the tenth from the front of the hive so that I could slide bars easily and that seemed to help. Even with the bumpy start, these bees only seem a day or two behind the Rabun County bees who were installed on the same day but started building comb right away.