I provided both of my queenless hives (Aristaeus2 and the L hive) with frames of brood and eggs over a month ago. There is no sign of a queen in either hive. They have no brood or eggs and are dwindling.

Every Saturday I go to the Peachtree Road Farmers Market where Ray Lopes (see picture below) has a honey booth. I knew he and Donna raise queens, so I called him earlier last week when I discovered that the hives still appeared queenless. He agreed to bring me two queens on Saturday. I picked the queens up at the Farmer's Market (along with some fresh eggs, some cucumber and pepper plants, and some delicious applewood bacon). 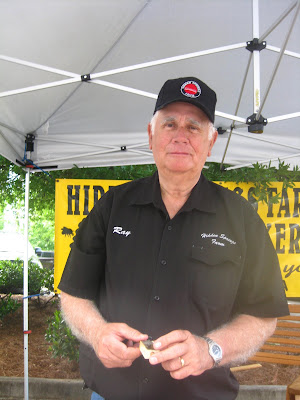 I put the queen cages into the two queenless hives, first inspecting every frame to reassure me that they were indeed queenless. We had cold and terribly rainy weather when the emergency queens would have been mating so perhaps it didn't work for them. I installed the queens and hoped for the best. 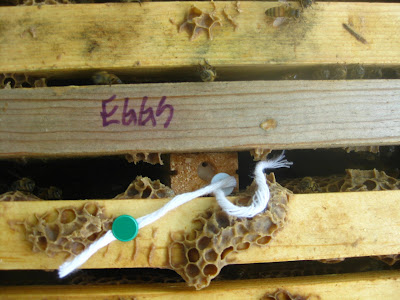 Aristaeus2, originally from a swarm I collected a couple of years ago, is dwindling. The bees don't look too healthy - if you double click on the picture you can see varroa mites on at least three of these bees. I'll proceed with powdered sugar shakes for this hive (and all my hives) when I return from Young Harris on Sunday.

Meanwhile I'll check to make sure the queens have been released before I leave on Wednesday. 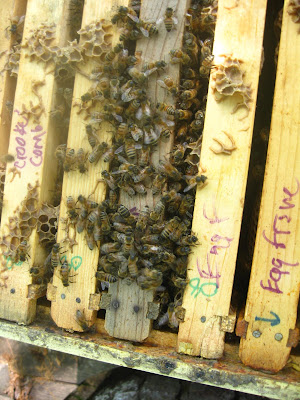 On a good note, Mellona which is slow to build up every year, has had me worried. I opened and really inspected it because I was afraid it was another queenless hive, but I saw lots of brood and eggs. Just off to a slow start, I guess. 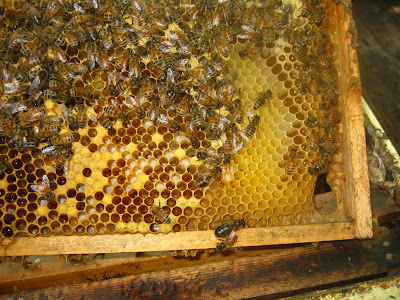 Thursday will be three weeks since we put frames of brood and eggs into the Blue Heron hives. I'll also check on them when I get back on Sunday. And I'll check on Valerie's hive - it needs a name!

While I'm in the mountains at Young Harris I'm going to check on the Rabun County hive (also needs a name). Clayton is just about 30 minutes from Hiawassee where I'll be staying. My friend Julia and her son Noah are meeting me at the hive there to check on its progress on Thursday at the end of the day. I hope that hive continues to do well.

Meanwhile my Easter swarm hive is going gangbusters! I added yet another box yesterday. It's now a five (medium) box hive. Those enthusiastic bees fill boxes up almost as fast as I give them boxes.