At Young Harris this morning I heard a talk by Dave Tarpy on how good queens = good colonies.  A study by Dennis vonEngelsdorp found that of hive deaths over the winter, 31% of the deaths were attributed to poor queens. 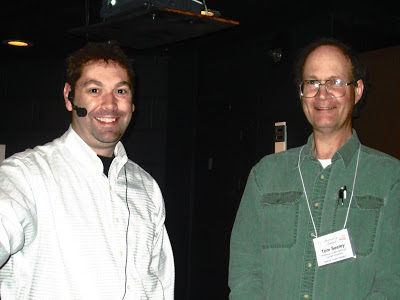 Dave Tarpy is on the left, Tom Seeley on the right (weren't we lucky to hear both of them!)

Tarpy pointed out that the queen serves many more functions in the hive than simply being a good egg laying machine.  When the queen is a virgin, her QMP (queen mandibular pheromone) is low but after mating her QMP is high and stays high during her lifetime.  Her emission of this pheromone does many things for the hive.


It's crucial in the life of a hive that the hive have a really good queen.  In the hives we run where we let the hives requeen themselves, there is a possibility that the bees will not make a good queen.  I've always heard this but never understood why until today.

If the hive is queenless and desperate for a queen, then the beekeeper gives them a frame of brood and eggs to help them make a queen.  The pheromone emitted by the eggs and young larvae is helpful in making the bees react as if they have a queen.  But they are still desperate for a new queen as quickly as possible.

In the general development of a queen, the bees feed the egg and larvae only royal jelly until the cell is capped.  If the egg is to be a worker, then after the third day, the bees feed the larvae bee bread and other things - not just royal jelly.  With their goal being to replace the queen as quickly as possible, they may very well pick an egg or larvae that is older than 3 days and start feeding it royal jelly.  In the interim, it may have had a couple of days of being fed like a worker, meaning that it has a lesser quality developmental start and will be less of a great queen.

Not only that, but a queen cell made from a four or five day larvae is going to emerge in 11 or 12 days rather than 16 (as in a one day egg).  The bees may pick for speed of emergence rather than quality so that they get the new queen sooner than later. The newly emerged less-than queen will then kill the other queens in their cells and you the beekeeper are stuck with a less than wonderful queen.

To prevent this Dave says to check the hive five days after installing the brood and egg frame.  If you find any capped queen cell at that time, remove that cell, leaving any still uncapped queen cells which were of course started with younger larvae and thus more likely to be successful queens.

That last paragraph was worth going to the conference to learn - thanks, Dave Tarpy.
Email ThisBlogThis!Share to TwitterShare to FacebookShare to Pinterest
at 11:06 PM
Labels: adding frame to queenless hive, bees eating eggs, dave tarpy, queen cells, queenless, royal jelly for queen