Yesterday all of my bee friends were posting on FB and other places that, as the snow/ice was melting, their bees were flying.  My strong little hive in the backyard - my only remaining home hive - was silent all day long.   This hive was a swarm that I retrieved near Northlake Mall in Atlanta.

The people told me that the bees had lived in a column of this condo/office complex for years.  This was the first year they had observed a swarm or called a beekeeper.  I figured this would be a survivor queen.  Nobody had treated these girls in any way for years and that's how I like it.  I didn't take any honey from them and have watched them with growing confidence in their survival over the year.

I hived this swarm in a box with a closed off screened bottom board and I have never pulled out the insert to open the screened bottom.  I don't know if that is helping them make it through the winter or not, but I have hitherto breathed a sigh of relief after every time the temperature returns to the 50s F, and I see that they are flying.

We have had a very cold winter for Atlanta - a week or two of temperatures in the teens and twenties; the Snowjam at the end of January, and now an ice storm of rather scary proportions.  But every time these bees have stayed the course.

Before the sun went down yesterday (it actually came out for a change), when the snow blocking the hive entrance finally melted off around 4:30 in the afternoon, I braved the ice-slick that is my concreted backyard area (a basketball court) to walk up to the entrance .  I saw a couple of bees, but only a couple, and thought that these were the only remaining live bodies.  So I went to bed last night with a heavy heart because my bees were silent.

Today I had a distracting day with my grandchildren.  We made Valentine's cookies (two different kinds) before we went to lunch. 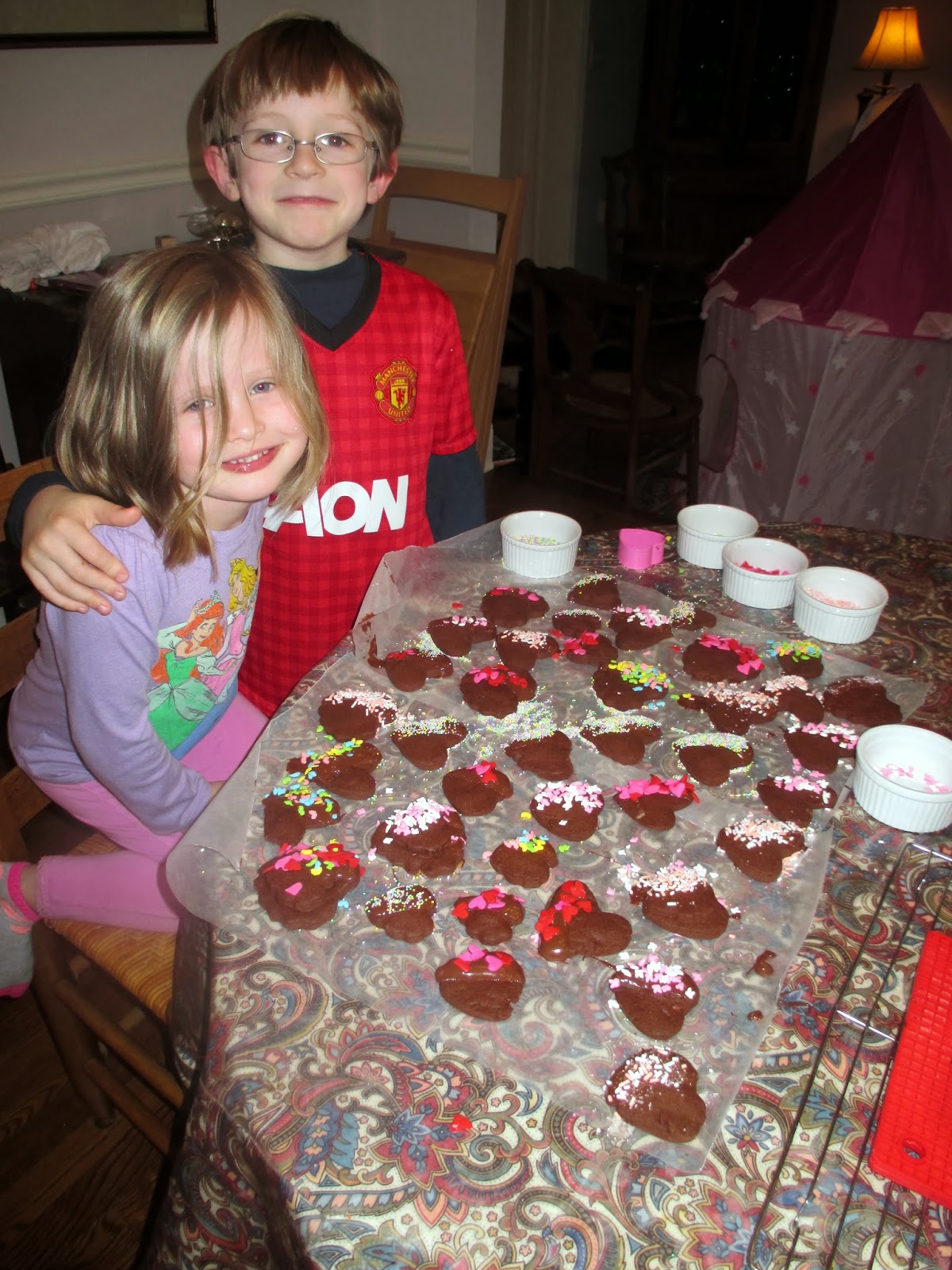 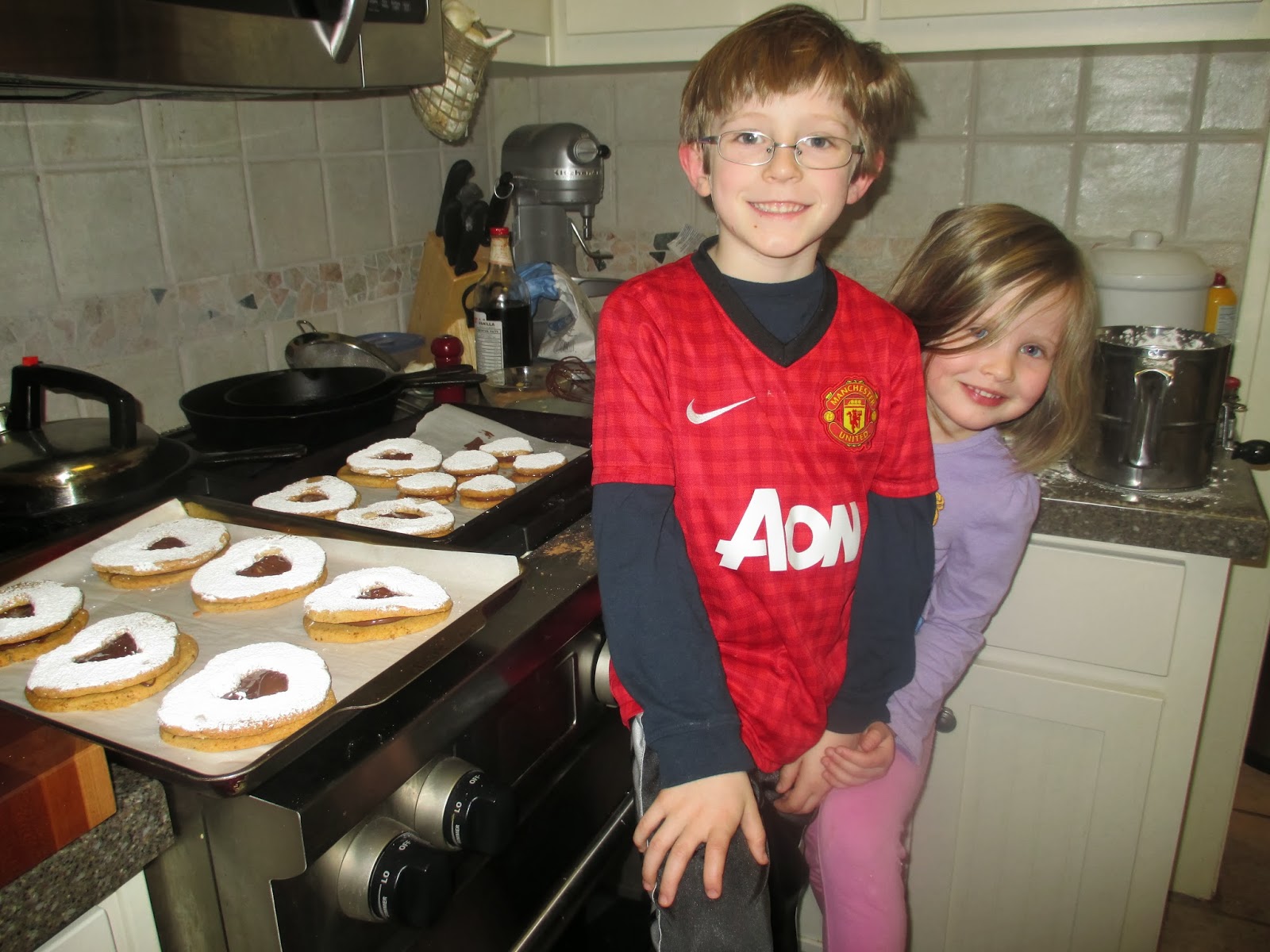 My third grandchild, Max, who is 2 was also there, but he was more interested in playing with toys than making the cookies so he isn't in the photo.

After all the baking we went to lunch and at lunch I was telling them that I felt so sad that my bees had died.   I told them that it was warm enough according to the car thermometer that the bees, if they were alive, should be flying, but I had not seen them and I was sad to see that survivor hive go.

When we returned from lunch, my granddaughter RAN to the back window and looked into the backyard.  "Grandma," she yelled, "the bees ARE flying."  I couldn't believe it and was moved to tears to find that this hive is still going strong.

My backyard is down in a deep area and it probably was colder than 50 back there for all of yesterday and today.  When the car said 54, they probably finally had a temp by the hive just at 50 and decided to come out to go to the little bee's room (as Dean Stiglitz would say).

I AM HAPPY.  What a Valentine!

So celebration isn't the meaning of this song, but it is about the difficulties of how we love - and loving the bees isn't much different in the challenges of it.  I love this rendition as do so many others, so I'm embedding this video because my bees are alive today: