What Do Beekeepers Do in the Winter.....?

And your answer was make soap - right? 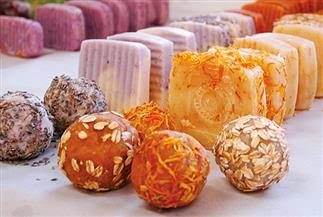 That's what I am going to do this weekend.  My sister and I are going to the John C Campbell Folk School to take a class in making lye soap.  I love spending time with my sister and I love going to classes at the Folk School, so what could be better?

I haven't taken a Folk School class in seven years, so this should be lots of fun.  It's like going to grown up camp, complete with a dining hall with community tables.  Back in 2006 when I first started beekeeping, I took a beekeeping class at John Campbell from Virginia Webb and learned about bees, pollen, and wax.

Jeff (my son-in-law who keeps bees with me) and I have already experimented with glycerin soap, but some people don't like that type of soap and the "real thing" is made with lye as they did in the old days.  So I am thrilled with the opportunity to learn an old-fashioned craft and maybe figure out how to put my beeswax into soap.

Jeff wants me to teach him so he can make his favorite soap and not have to buy it.  The soap he likes is flavored with DIRT, SMOKE, and bay rum.  I went on the Internet and would you believe, you can buy oils that are scented with earth, campfire smoke, and bay rum.  I guess he and I will try to replicate the soap he loves.

I'll take photos of what I learn and post them here when I get back.  It's pretty old-fashioned at the Folk School and I doubt I'll have Internet access for posting while I'm there.

I heard a lecture from Marcy, a member of our bee club, on how to make lye soap.  She said her jeans were now full of holes from the lye, so I am taking pants I could care less about and old shirts.  We'll see how it goes!

My first Folk School class was when Atlanta hosted the Summer Olympics.  The Olympic committee asked the Atlanta citizens to get out of town to lessen the traffic problems during the games.  So I signed up for a quilting class for a week at the Folk School and thus began my grown-up camp fun and games.

More after my adventure.  BTW this is my 2015th post on Jan 15, 2015!
Email ThisBlogThis!Share to TwitterShare to FacebookShare to Pinterest
at 11:57 PM
Labels: Folk School, products of the hive, soap