This past Sunday was moving day for the Polar Bees in the overwintered nuc.  I was hesitant to get into swarm season with this highly enthusiastic hive in a nuc.  I was cautious about moving them because last year every time I fooled with this hive, I got stung several times, but I accomplished the move with no gloves and no stings.

I used hive drapes the whole time.  First I took the hive down to the bottom box and covered each of the nuc boxes with hive drapes. 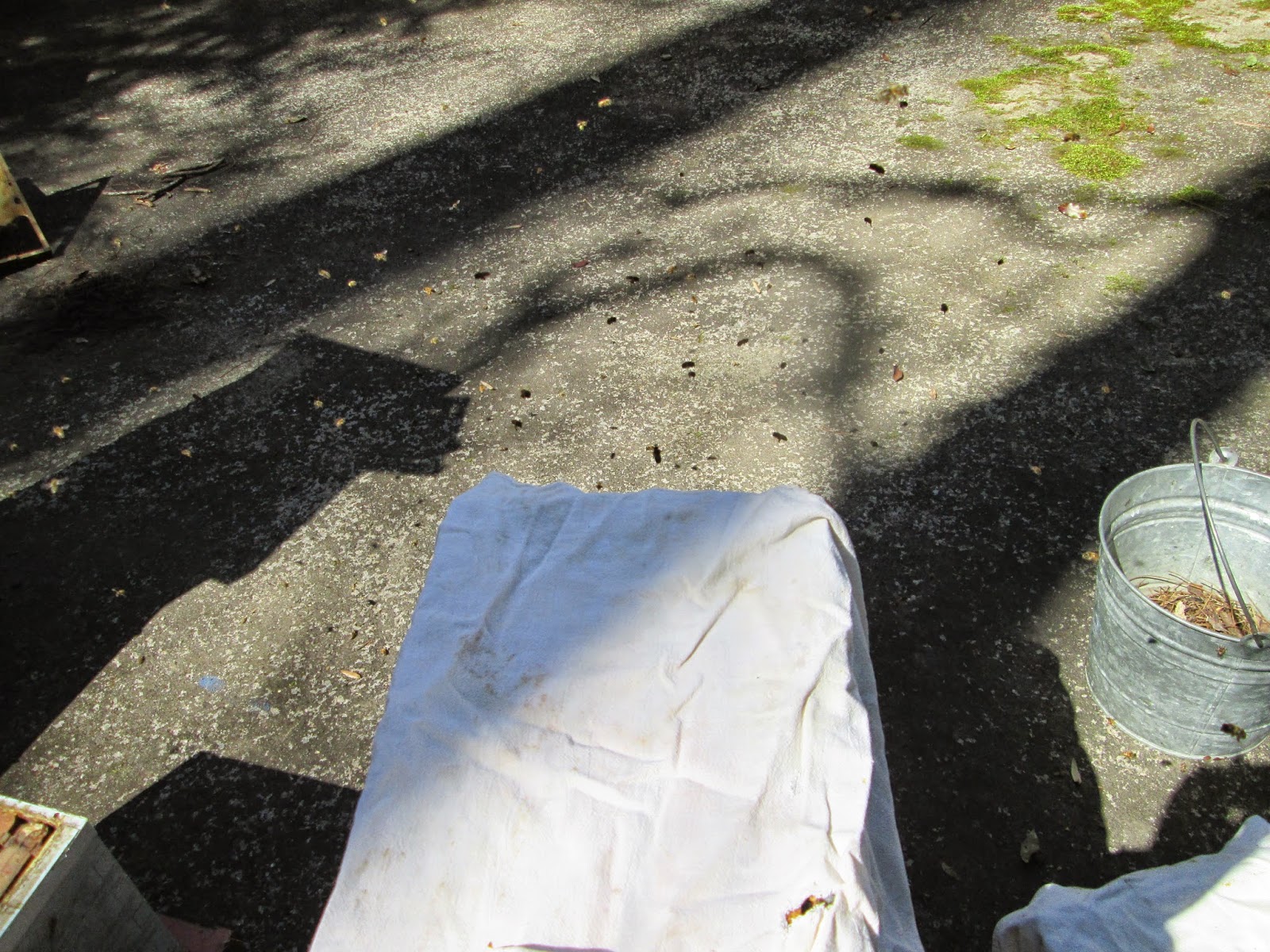 My excuse for the next part of this is that last year was the year of my injured leg so I didn't do much of a good beekeeping job.  This nuc was a split from one of my Bill Owens' hives in Tom's yard.  At the time I took the nuc box to serve as a Billy Davis quiet box during the inspection of the hive.

So if you look at this bottom deep nuc box, the first thing I notice is that the two stapled frames are not my frames and must have come from Bill Owens when I picked up my hive from him.  The other three with the arrows on them are my frames.

I am sorry to report that I don't have a photo of this but will take one in my next inspection of this hive.  I pulled  up the second to the side frame on the left and found that in fact it was a medium frame.  The bees had added free comb to the bottom to fill up the box so that it is the depth of a deep but the wood stops at medium.  This was true of all three of my frames - all were medium frames that the bees had converted to deeps.  Here's a photo of a frame in another hive where this happened.

I think I had intended to take this "quiet box" home and put it into a full box but must have had trouble with my leg and didn't follow through.  Then time went by and I never did it.  I do remember looking at it, thinking it would be nice to have a nuc in my bee yard.  Then the bees were mean in the hive so I wasn't anxious to open it and totally forgot that there were medium frames in there.  When I did open it, I mainly did so to see if they needed another box or more room and didn't do a deep inspection. I've read various places that if the bees extend the comb like that, they will draw drone comb in the free comb area.  Not true for me in any hive where this has happened.  They always just replicate whatever they were doing in the upper framed comb.  In this hive, it was brood comb and instead of a football pattern, the queen had a full deep circle of "dark biscuit" (another Billy Davis reference) brood comb.

The dark biscuit comb means the brood is about 21 days old and ready to emerge so my move took place none too soon.

On one of the stapled frames I saw the lovely, majestic queen, moving slowly over her brood.  You can see her below. 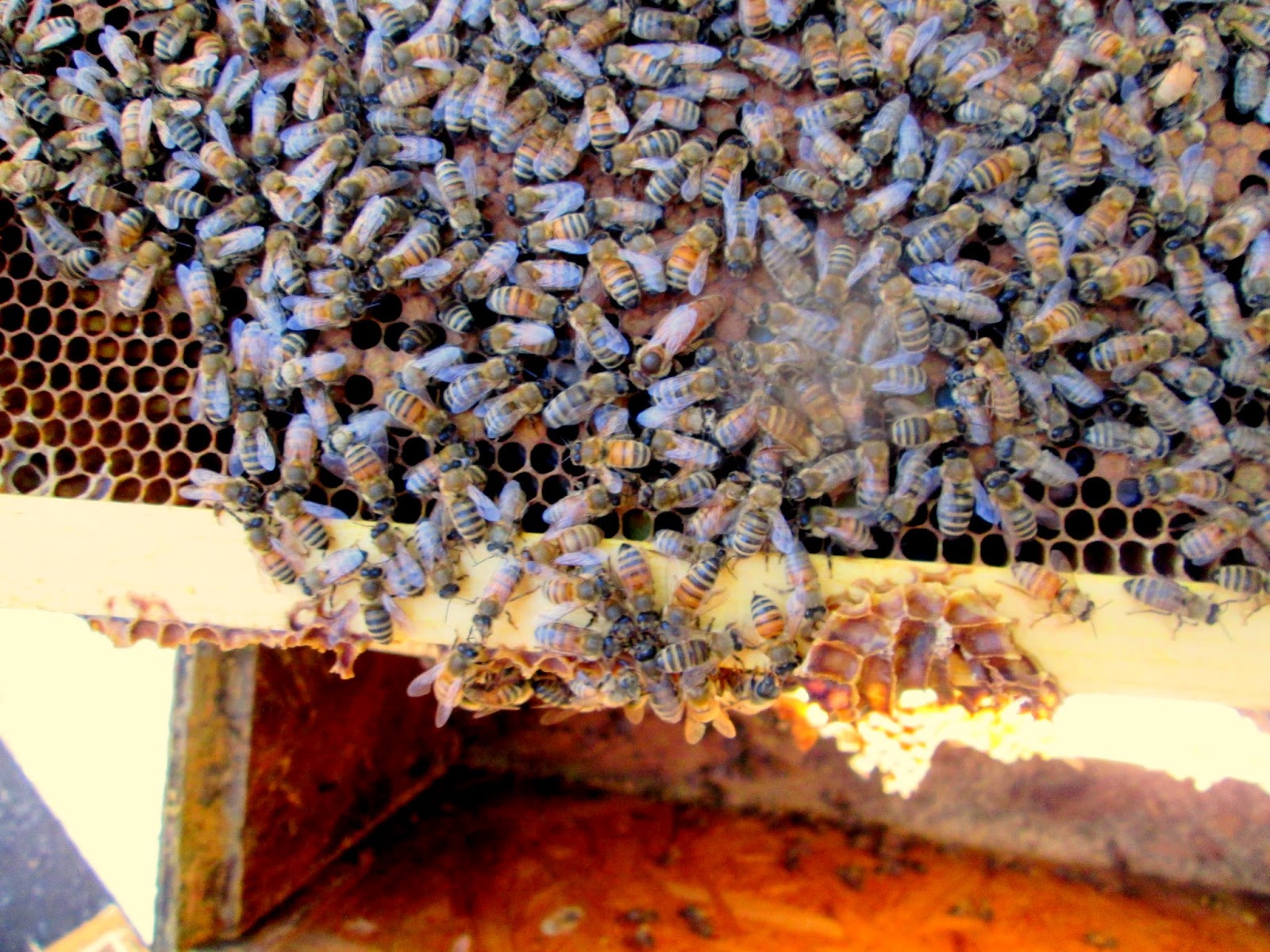 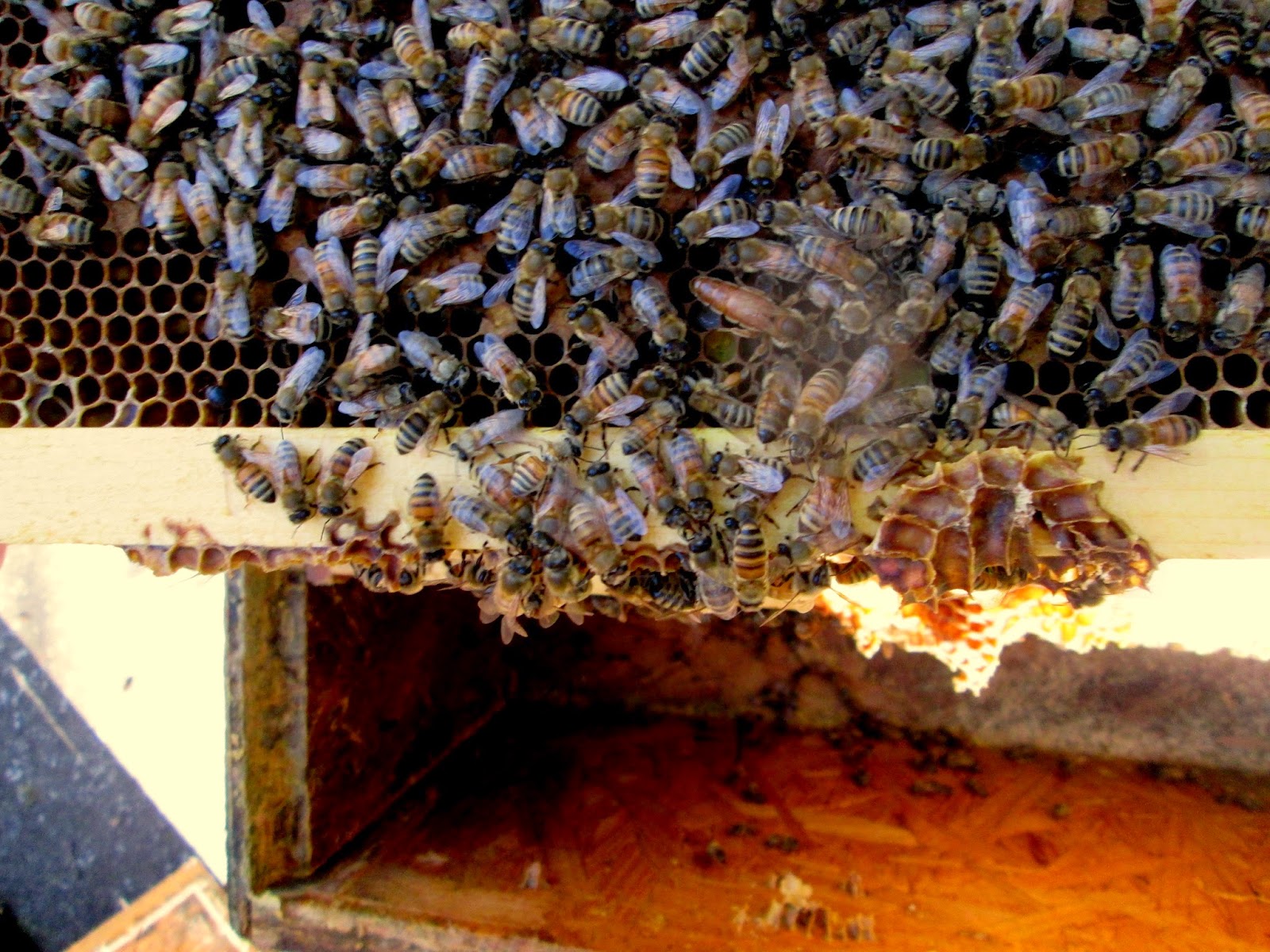 At this time of year, often our Atlanta bees are on the verge of starvation because of the late winter freezes.  Not this hive.  The second box was full of frames of fully capped untouched honey like the one below.  No danger for the Polar Bees to starve. 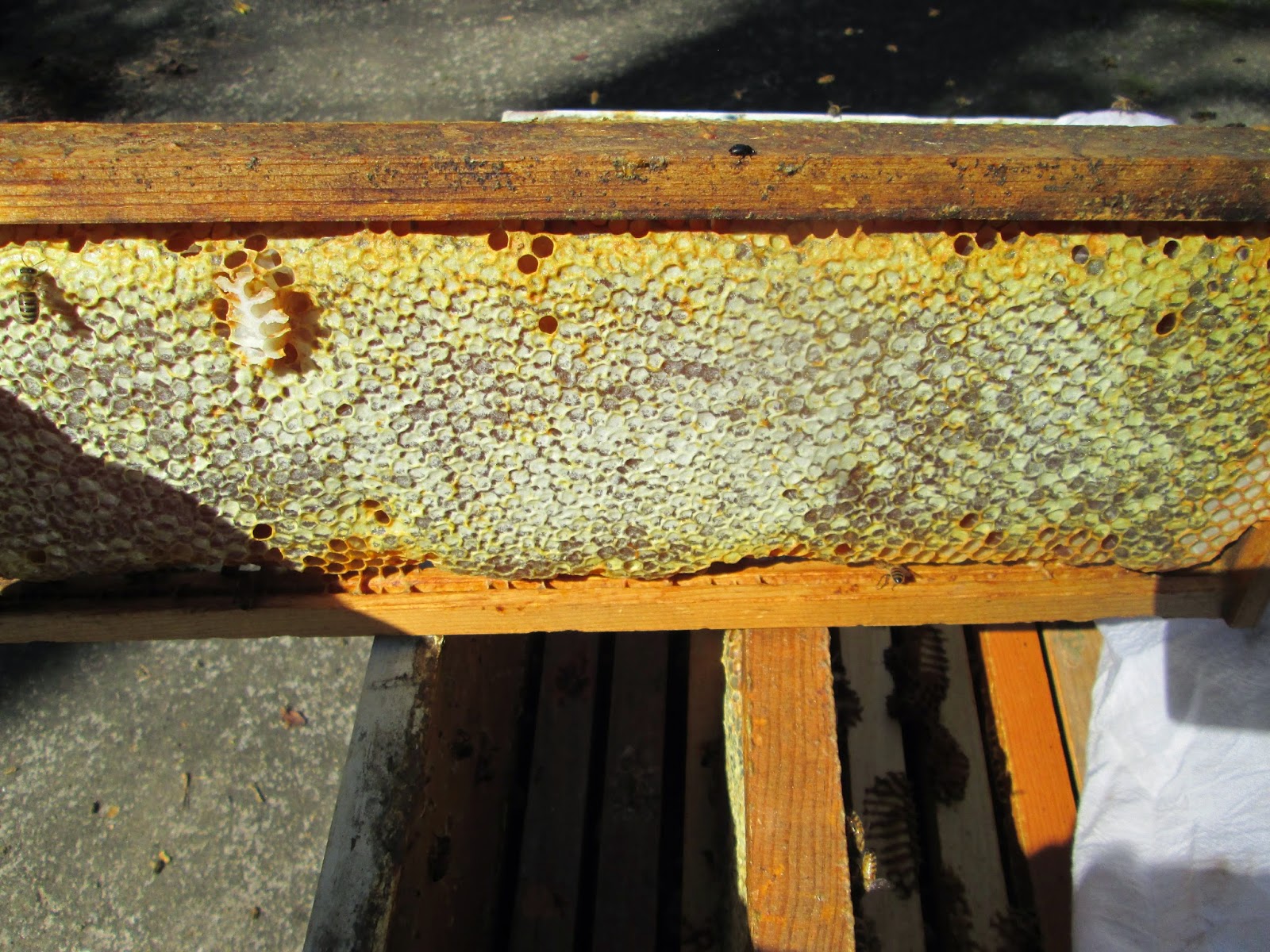 I did see some small hive beetles who had overwintered with the bees.  I saw about five of them.  Below is an out of focus photo of an oil trap with absolutely NO SHB in the trap although there were live ones in the hive.  I guess I need to mix up the banana peel concoction to tempt the beetles into the trap instead of using oil. 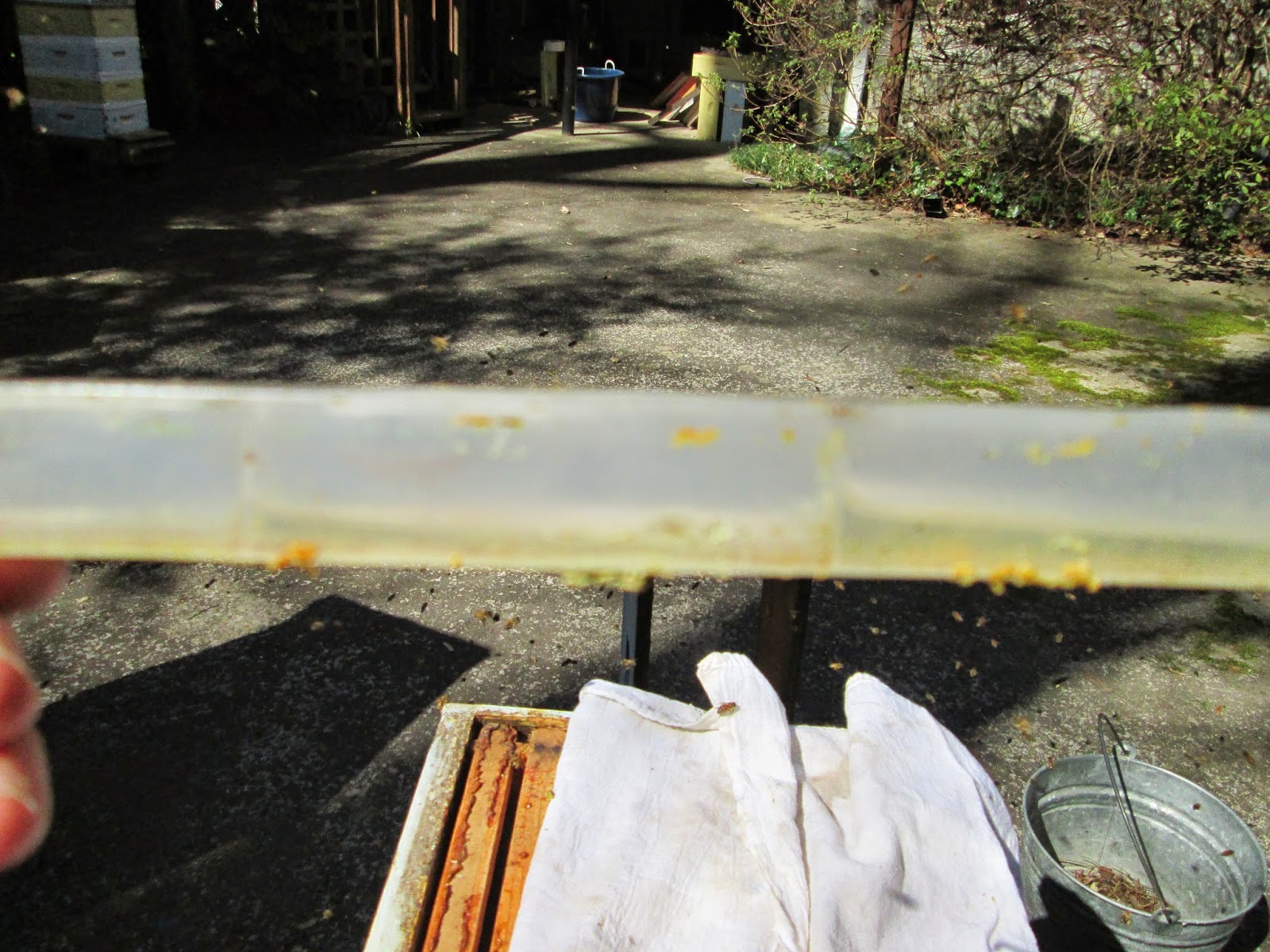 So before moving day clean-up, here's how it all looked: 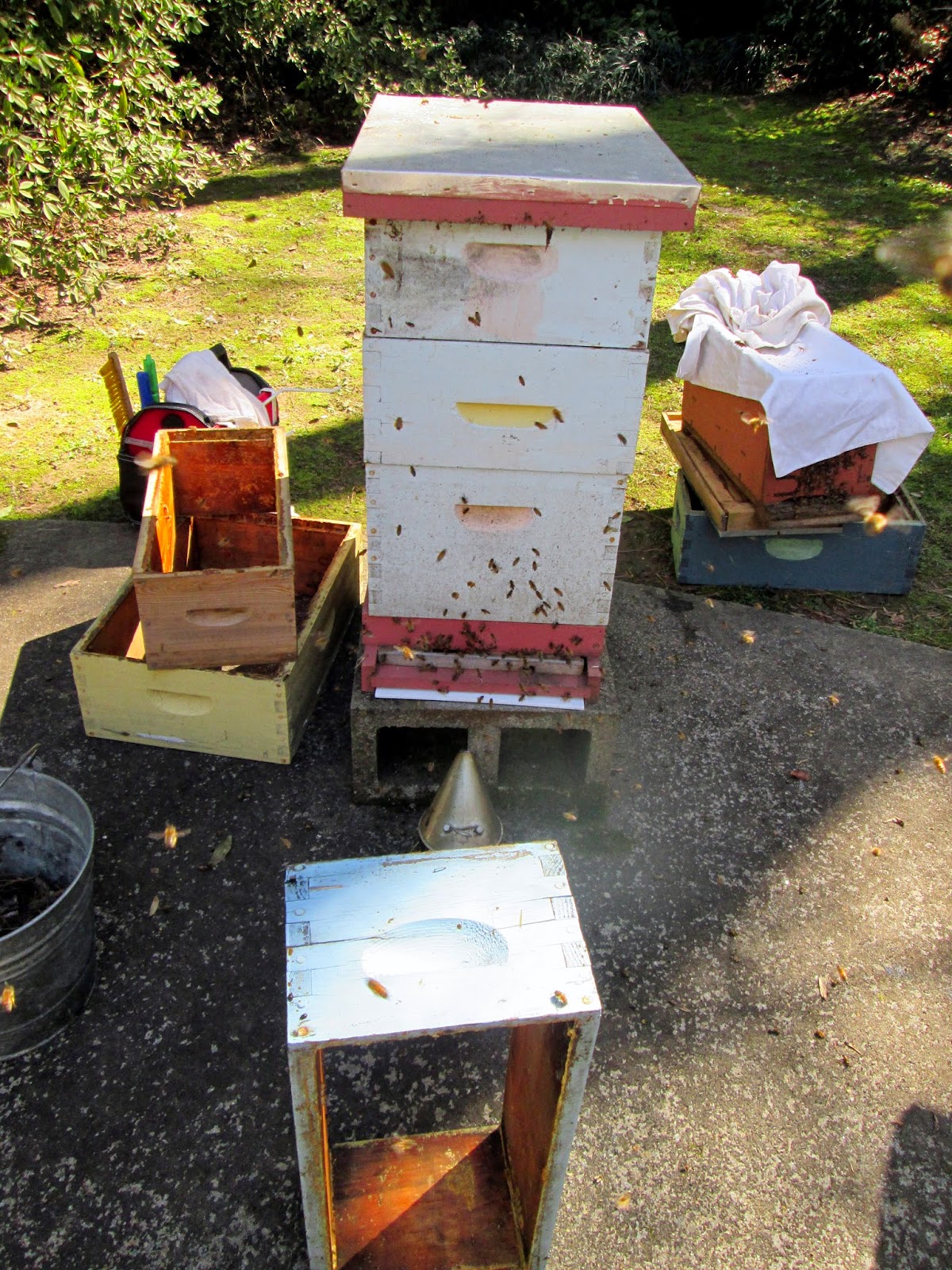 I put the hive in three boxes because after I filled out the bottom box with three empty deep frames, I had full frames plus drawn comb from the other two boxes enough to fill the second box.  It was almost full of honey (five full frames and two partial ones).  So I went ahead and put a third box on this hive to give them some growing room with new brood about to emerge. 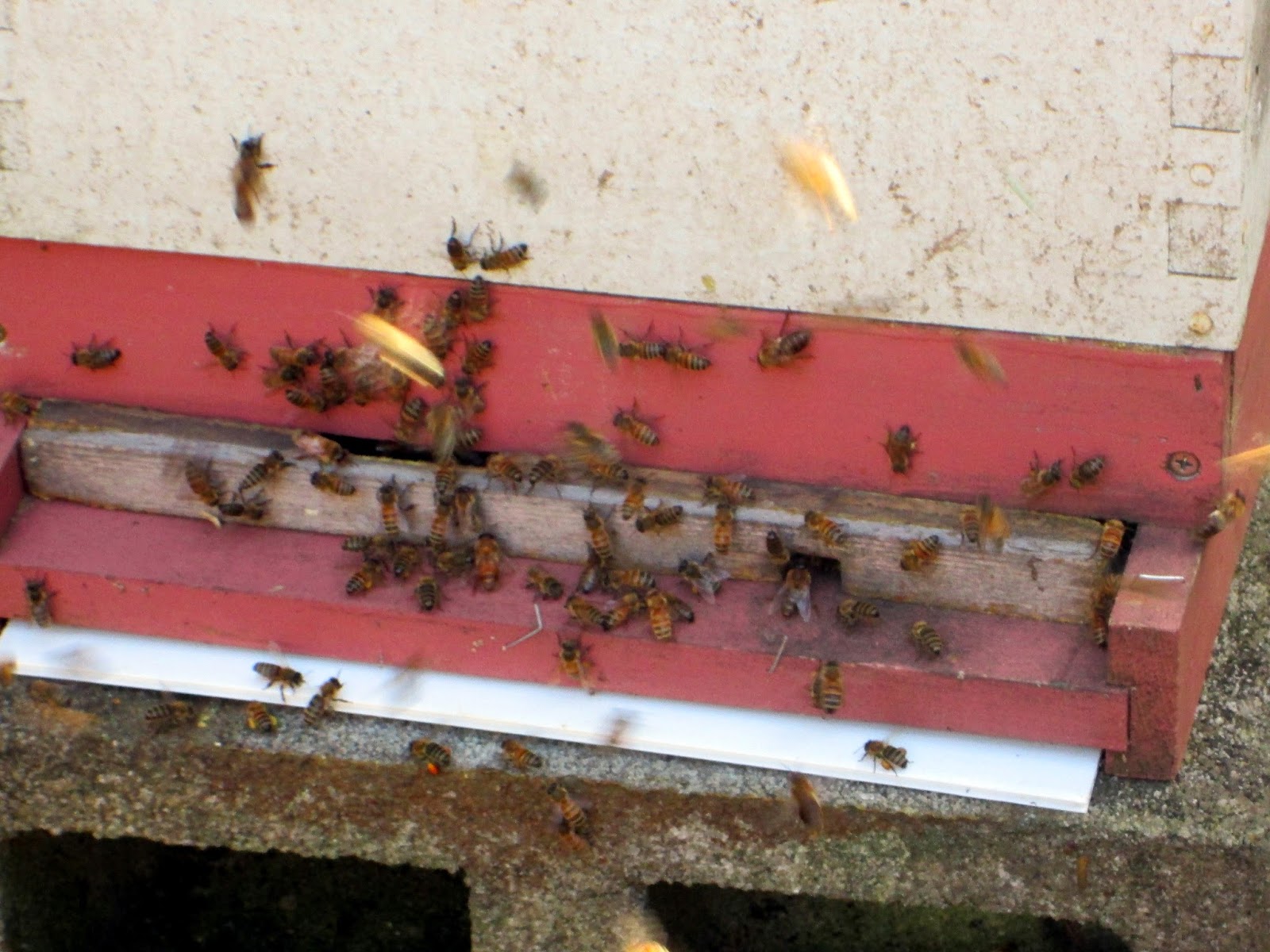 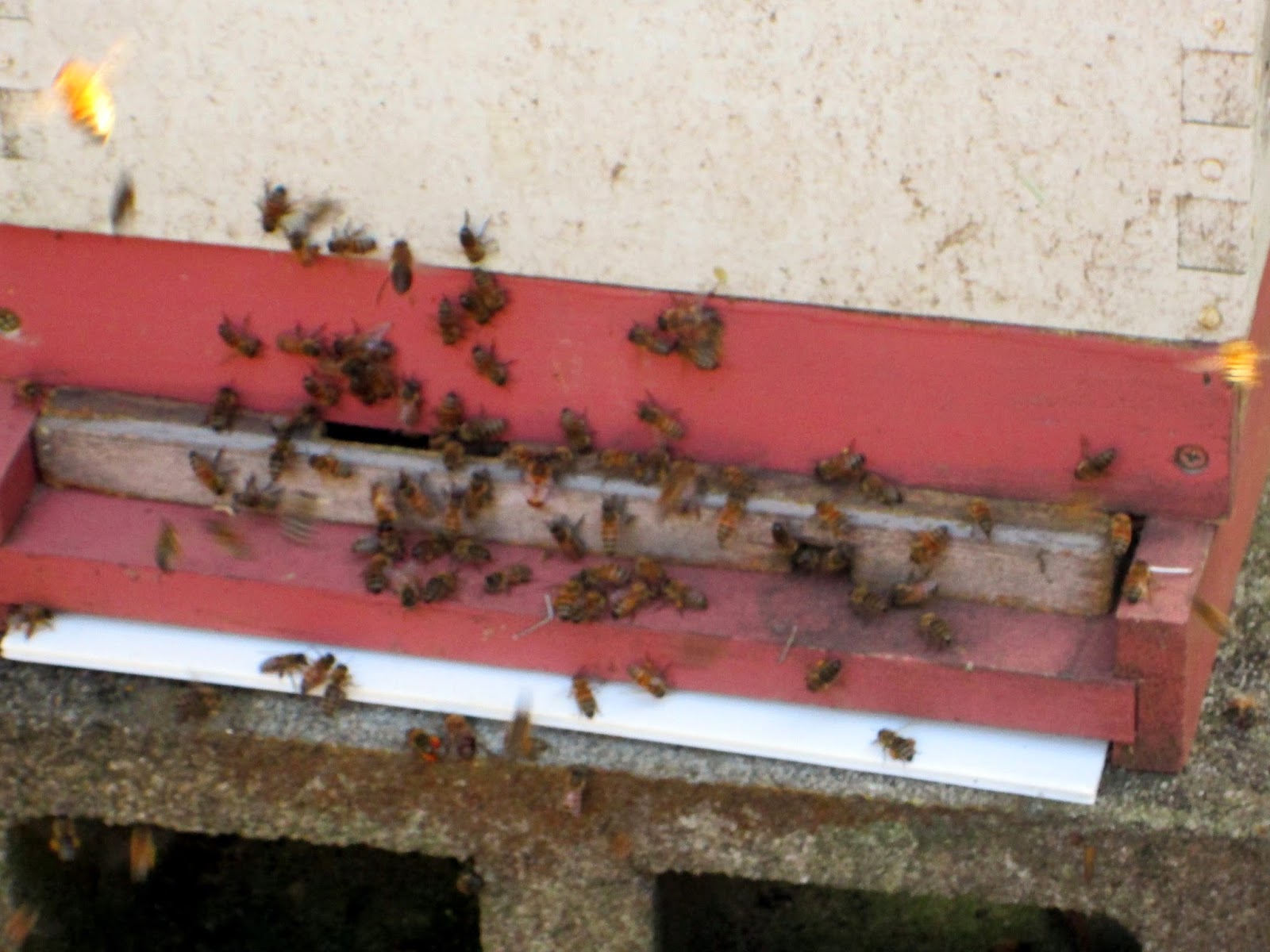 I put on an entrance reducer as I do on all my hives and closed off the screened bottom since they had been living in a solid bottom nuc box.  The bees tumbled all over each other as they vied for entry.  In the next week or so, I'll put on one of Billy Davis' robber screens to leave on for the season.