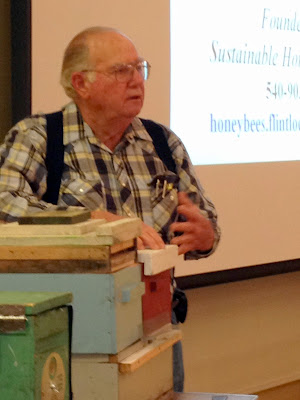 Billy Davis respects his bees, his "critters," as he calls them.  I learn so much from him every time I hear him speak.  The first time I heard him was at EAS in Boone, NC.  From him I learned about the reason to use hive drapes and have used them ever since.  We employ hive drapes in our inspections at Chastain Conservancy and the bees are so much calmer.  We light the smoker and rarely use it. 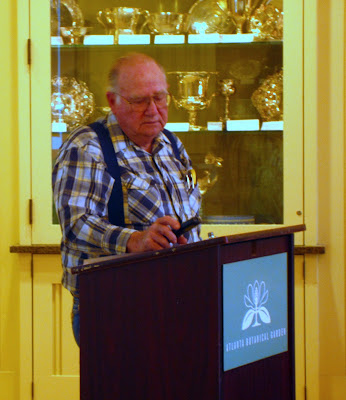 Billy Davis spoke to the Metro Atlanta Beekeepers last night about his nuc sustainability program in Round Hill, Virginia. Billy said that a beginner can learn more from raising bees in a nuc than any other way.  He said something like, "Anyone can find a queen in a five frame nuc!"  He also emphasized the importance of taking notes and said people in his apiary have to prove they can take notes before they can manipulate any hives.

Billy has been keeping bees since he was a kid - over 50 years.  He stressed the importance of having a mentor as well as the importance of using nucs.  He does not like the idea of buying a commercial nuc but rather creating a nuc from your own splits.  A nuc is
Billy's approach is that we need to help the bees survive by promoting hygienic queens and raising local queens.  He has an extensive program in Virginia in which he runs nucs and raises queens.  He went through his methods for the nuc program in explicit detail, more complicated than I can repeat here, but essentially he is making nucs over and over; overwintering the nucs; culling out queens who are not certifiable breeder queens.  And then he does it all over again.

He railed against artificial insemination and said that it had ruined many aspects of farming - breeding cattle, breeding hogs, breeding all kinds of animals.  He thinks the bees should raise their own queens.  He selects for hygienic queens by systematically killing capped larvae and seeing if the bees remove it within 24 hours.  If so, he uses that queen as a breeder.  As a result he does no varroa treatment and said the most number of mites he has seen this year is THREE.

He is a wood-working guy (in his non-bee life, he works at Home Depot) and makes his own equipment so that he can keep these nucs on a common base.  He has entrances on opposite sides and faces his nucs so that the prevailing winds are not blowing toward the entrance.  You might notice that he uses all medium equipment - no deeps or shallows for him. 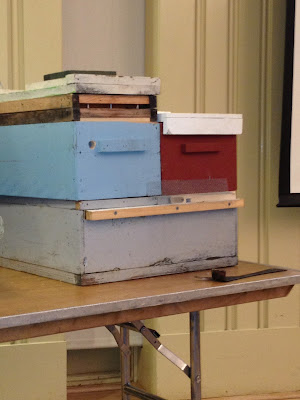 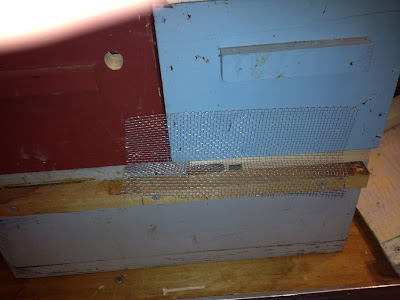 He keeps a robber screen and an entrance reducer on every hive.  I was interested in his robber screen - not complicated like mine, but rather a simple screened wire, looks like #8 hardware cloth or maybe a little smaller.  He says it needs to extend 4 inches on either side of the entry to be effective.  He simply staple-guns it to the hive body and the landing.  It's folded into a squared edged to create a tunnel to the entry hole.  Boy, I plan to do this on every hive after my terrible robbery at two different great hives last year.

We have used hive drapes at Chastain Conservancy since I heard him speak about them at EAS.  Now I'd like to try the other item he uses during an inspection: his "Quiet Box."  The Quiet Box is the green box in the photo below. 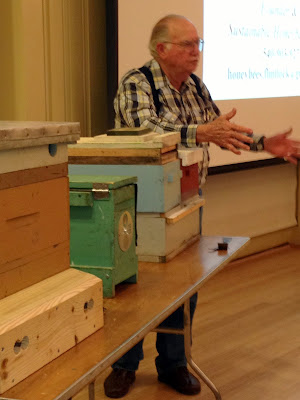 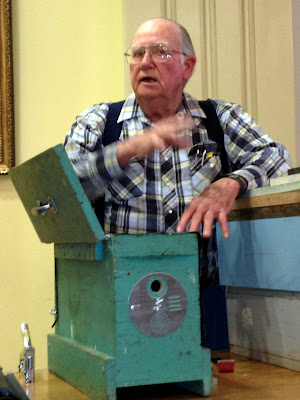 Billy said that anyone in his apiary who took out a frame and leaned it against the hive would be in big trouble with him.   In our inspections, we typically use a frame rack that may or may not be under the hive drape.  It is his contention (and he's obviously right) that being out in the sun like that is very disturbing to the bees.

I often find a clump of bees on the outside wall of the hive box when I remove the frame from the rack to return it to the hive.  They left the frame and crowd together on the hive box, probably trying to get into protected space where it isn't very light.

Instead of this disruption, Billy uses a quiet box - the green box in the photo.  It is equipped with a built-in hive drape.  He puts the first frame removed from the hive into this box where there are a couple of other frames.  If the frame is alone in the box, he might also put in the frame on which he finds the queen.  These frames remain in the "Quiet Box" until he is finished with his inspection and then he returns them.

If he chooses not to return them to the hive, with those two frames, he has the beginning of a nuc.  He just needs to add frames of honey and pollen, capped brood and bees.

We could easily take an empty nuc box to our inspections at Chastain (and at my private hives) and use that as the "Quiet Box."  I am anxious to try this and see how we do with it.  Our first inspection there is on the 23rd, so I'll let you know how it works for us.

Billy feeds all of his bees sugar syrup all the time.  He says that they will quit taking the syrup when there is nectar available.  He uses the rapid feeder from Bee Works in Canada that I also use. 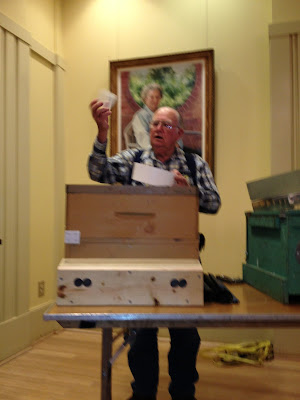 He likes this feeder because it is inside the hive and because the bees are protected from drowning when using it.

Billy employes nematodes to control the SHB.  He says the first year you need to do three applications (Julia and I only did one the year we did the nematodes) and thereafter you need to do two applications.  I need to get back in touch with SE Insectaries and order some more to do that again. 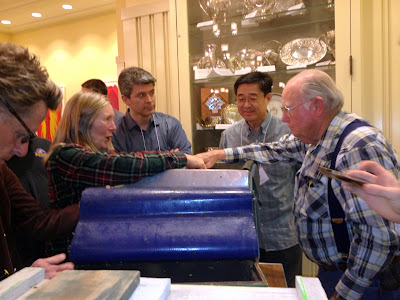 At the end of this wonderful talk, Billy was surrounded by members of the Metro Atlanta Club who wanted to ask him questions and thank him for all the information.  I went up afterward to thank him personally and had such a lovely surprise.  He looked at me and said, "I'm so glad you came.  I was hoping you would be here.  I do go to visit your web site sometime, you know!"  I was bowled over and honored - who knew that he even knew who I was?